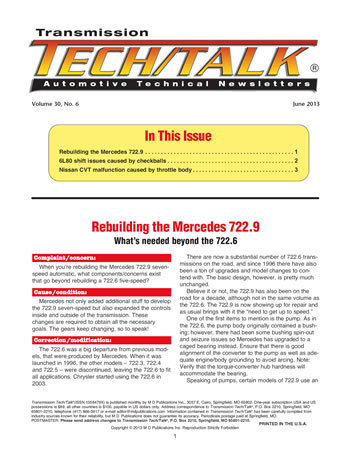 When youʼre rebuilding the Mercedes 722.9 seven-speed automatic, what components/concerns exist that go beyond rebuilding a 722.6 five-speed?

Mercedes not only added additional stuff to develop the 722.9 seven-speed but also expanded the controls inside and outside of the transmission. These changes are required to obtain all the necessary goals. The gears keep changing, so to speak!

There are now a substantial number of 722.6 transmissions on the road, and since 1996 there have also been a ton of upgrades and model changes to contend with. The basic design, however, is pretty much unchanged.

One of the first items to mention is the pump. As in the 722.6, the pump body originally contained a bushing; however, there had been some bushing spin-out and seizure issues so Mercedes has upgraded to a caged bearing instead. Ensure that there is good alignment of the converter to the pump as well as adequate engine/body grounding to avoid arcing. Note: Verify that the torque-converter hub hardness will accommodate the bearing.

Although the 722.9 configuration is somewhat the same as the 722.6, there are some noticeable differences. The first clutch pack behind the pump is the B1 brake and is basically the same between the two models. No surprise there.

Moving along, the next clutch pack in line is the K1, which is the beginning of certain variations. The K1 clutch drum also contains the front sun gear on both models. The 722.6, however, uses a sprag in the sun gear, whereas the 722.9 doesnʼt. The diameter and style of the K1 drums are noticeably different as well (figures 1a & 1b).

To make a five-speed into a seven-speed, more stuff needs to be added, which is the focus of the next item.

The 722.6 stack-up goes from the K1 clutch to the K2 clutch/input shaft. The 722.9, however, dropped another clutch pack in between the K1/K2 clutches and called it a B3 brake. This may be a little confusing, since the B3 brake on the 722.6 is at the back of the transmission. The size and configuration of the B3 piston support are like the B1 brake portion of the pump cover (Figure 2).

The 722.9 planet is much more compact because of the rear ring-gear shell being a separate item (Figure 5).

The planet actually has teeth that mesh with the notches in the ring-gear shell. The opposite end of the shell splines to the rear ring gear, just like the 722.6 design (Figure 6).

From the K2 drum back, the 722.6 and 722.9 are very similar in configuration. The K2 clutch, center and rear planet sets, and K3 clutch look the same between the two models. One little departure, though, has to do with the last two clutch packs. The 722.6 has a large and a small clutch pack, called B3 and B2. The 722.9 also has what appears to be the same two clutch packs; however, the large pack is called the “BR” and the small pack is the “B2.” Any guess what the BR stands for?

Although the 722.9 has not undergone the array of upgrades that the 722.6 has, some have occurred. In late 2010, a bearing change resulted in several planet-component changes. The rear planet was modified to accommodate a different bearing design. Along with the planet change, the center and rear sun gears were also modified because of the bearing changes. These components are not interchangeable.

Last, many transmission manufacturers have evolved the park/neutral switches from simple contacts used in park, neutral and reverse to rather complex sensors. Names like MLPS, DTR, TR and IMS (internal mode switch) have become commonplace.

The 722.9 takes it one step further with the ISM (intelligent servo module). The ISM is literally a drive-by-wire component that bolts to the side of the transmission and will shift the manual-valve linkage (Figure 8).

Gone are rods and cables; however, donʼt break it or someone will pay out big money.

A 2007 Cadillac Escalade with high mileage experiences an occasional check engine light and erratic-shifting problems. Trouble codes that are set do not return consistently once they are cleared. The codes triggered are P0700, P0756, P0872, P2714 and P2723. These codes relate to different clutch assemblies, solenoids, valves and pressure switches.

Although various components can contribute to the complaints listed, in this case a worn checkball was to blame. The way that a worn checkball impacts the rest of the transmission is dependent upon location in the “pecking” order of the system. For instance, the No. 1 checkball can affect four different clutch packs.

When a vehicle with high mileage – in this case 126,000 miles – exhibits the problems that were present on the Escalade, it would be customary to assume major damage existed.

With the valve body disassembled, the No. 1 check-ball was found to be undersized and actually stuck in the hole of the separator plate (Figure 9). That particular condition would create one type of problem, versus another type of problem that would have surfaced had the checkball punched through the hole.

Of the seven plastic checkballs in the valve body, only one was undersized (Figure 10). The material of the checkballs has changed to improve durability (shades of AX4S/AX4N checkball issues).

Even if a checkball doesnʼt become stuck in the separator plate or hammer through it, an under-sized ball can affect oil flow within the valve-body cavity by partially blocking the worm track (Figure 11).

Finding and fixing the valve-body problem prevented unnecessary action, including TCM replacement or even R & R and disassembly of the entire transmission, not to mention the added cost.

A 2007 Nissan Maxima equipped with a 3.5L engine and RE0F09A continuously variable transmission experiences inconsistent ratios (gears) as well as dropping into lower ranges while cruising with the driver maintaining a steady pedal. The transmission worked erratically not only in automatic mode but also in manual mode. The transmission had a mind of its own.

Previously, a transmission had been installed because of other symptoms and normal component failure. However, since that time the unit had been functioning well, until now.

There are several potential reasons that could cause a transmission to malfunction, but in this case the transmission was not the culprit. The problem was attributed to the throttle-body assembly on the engine.

Whereas older vehicle applications had a cable between the gas pedal and throttle body (carburetor), newer models like the 2007 Maxima use drive-by-wire. The APP (accelerator pedal position) sensor sends an electrical signal to the throttle-body motor, which in turn moves the throttle plate.

Thatʼs all well and good as long as everything functions as intended. The bad news is when it does not. Although the drive-by-wire system has a lot more that can go wrong than earlier cable designs, in this case the problem was nothing spaceage.

The problem was merely a buildup of carbon on and around the throttle plate causing sticking problems as well as providing inconsistent electrical signals to the computer.

In conjunction with the transmission problem was a sluggish pedal, which was also inconsistent. There were no trouble codes set and the symptoms could have pointed to replacing items like the APP or even the throttle body itself. The throttle body is not cheap.

Believe it or not, all it took was a can of spray to fix all the problems. Newer throttle bodies require a specific type of cleaner, not the caustic cleaners used in the past. Electrical-component damage could result if the wrong stuff is used.

Depending on the extent of carbon buildup, the amount will dictate whether the throttle body can be cleaned externally or the body needs to be removed (Figure 12).

Once the throttle body has been cleaned sufficiently, ensure that the throttle plate moves smoothly to avoid repeated complaints. It may help to ask the customer what type of gas theyʼre using as well.

At the end of the day, it always helps to “look beyond the trans” just in case fix-it in a can will work.

Special thanks to Matt at Matlins Transmission, Aurora, Ohio, for bringing this issue to the attention of our technical team.