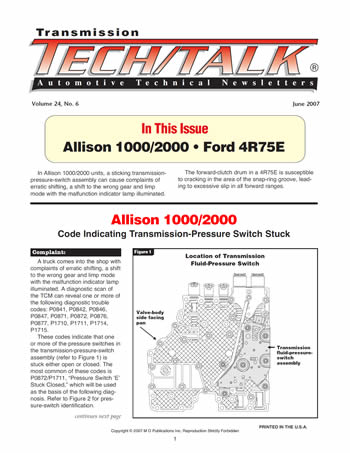 In Allison 1000/2000 units, a sticking transmission-pressure-switch assembly can cause complaints of erratic shifting, a shift to the wrong gear and limp mode with the malfunction indicator lamp illuminated.

The forward-clutch drum in a 4R75E is susceptible to cracking in the area of the snap-ring groove, lead-ing to excessive slip in all forward ranges.

These codes indicate that one or more of the pressure switches in the transmission-pressure-switch assembly (refer to Figure 1) is stuck either open or closed.

The most common of these codes is P0872/P1711, “Pressure Switch ‘E’ Stuck Closed,” which will be used as the basis of the following diagnosis. Refer to Figure 2 for pressure-switch identification.

Refer to Figure 4 for “worm-track” identification.

When diagnosing code P0872/P1711, start by checking the pressure-switch-assembly ranging by comparing the PSA range chart in Figure 7 with the ranging on the scan-tools data list. The chart indicates both switch status and scan-tool parameter status.

Since shift solenoids C, D and E are identical, one can be switched with the other to see whether the solenoid is causing the pressure-switch code. The shift valve is either stuck or not, and you can check the pressure-switch assembly for mechanical operation on the bench by connecting an ohmmeter to the switch terminals and physically pushing on the switch and releasing it while watching the meter to see whether it changes from an open to a closed state (see Figure 8).

Important Note: A faulty neutral-safety back-up (NSBU) switch can cause P0872/P1711 to be stored falsely. Refer to Figure 10 for the NSBU-switch logic chart.

Cracked forward-clutch drum, along the snap-ring groove area as shown in Figure 11. The metal debris found in the transmission sump is the result of the pressure plate of the forward-clutch drum hitting the inside area of the drive shell. Upon disassembly of a 4R75E, you may find no debris in the sump but the forward clutches may be scorched. The crack along the snap ring-groove may not be easy to see; check by placing a screwdriver or scribe in the snap-ring groove and slightly prying to reveal any failure in this area.

Once this update was completed, an extended-coverage program, #06N06, for certain 2005-2006 Crown Victoria long-wheelbase vehicles replaced the forward-clutch cylinder, also free of charge. The program extends coverage of the forward-clutch cylinder to 3 years or 150,000 miles from the start date of the vehicle warranty, whichever occurs first. It is a one-time-replacement program. This program covers certain vehicles that were built at the St. Thomas Assembly Plant from Job #1 2005 through February 26, 2006. Coverage is also transferred automatically to second owners.

If the vehicle owner already had paid to have the forward-clutch drum repaired before receiving the newsletter, a refund would be provided under program #06N06 when a paid original receipt was presented to the local dealer before May 22, 2006. Even if the forward-clutch drum was replaced, the vehicle owner still needed to have program #06B06 performed to update the PCM transmission shift-control-strategy calibration.

Note: ATSG has received several tech calls on vehicles not listed or covered under this customer-satisfaction program that are showing up in shops with the same failure of the forward-clutch drum. We also have found that on some of these vehicles with as little as 35,000 miles, the valve body would have severe wear in the bore of the pressure-regulator valve. This also can cause failure of the forward-clutch drum because of pressure spikes (see Figure 12).