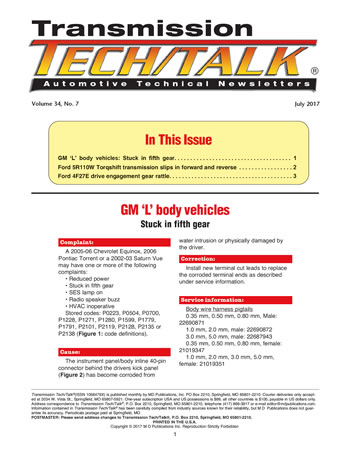 The instrument panel/body inline 40-pin connector behind the drivers kick panel (Figure 2) has become corroded from water intrusion or physically damaged by the driver.

Before or after overhaul, Ford Motor Co. vehicles that are equipped with the 5R110W Torqshift transmissions may exhibit a slipping condition in forward and reverse. Upon performing a line-pressure test, it may be observed that the line-pressure readings, as shown in Figure 5, are below specification. Note: this condition seems more prevalent on 2008 models.

The cause may be that the screened gasket in between the solenoid body and channel plate is blown out, as shown in Figure 4, causing a low-pressure condition.

The gasket blowout happens to be right under the area of the line-pressure blowoff. This indicates that the line-pressure blowoff is not working correctly and/or the calibration is incorrect. Testing has concluded that line pressure can go well over 500 psi on one of these transmissions when there is a pressure-regulator bore problem. Then with the blowoff not working correctly, this may cause the gasket to blow out.

A Ford vehicle equipped with a 4F27E may come into the shop with a complaint of a gear rattle or chatter for 1 to 2 seconds during drive engagement.

On earlier models the park and pinion gears are one piece (Figure 8).

On later models the park and pinion gears are separate pieces that are splined together (Figure 9).

The splines on the park gear become worn and will cause the rattle/chatter complaint. This cannot happen with the previous design because of the one-piece design.

Replace the pinion and park gears with either the early or late design components.