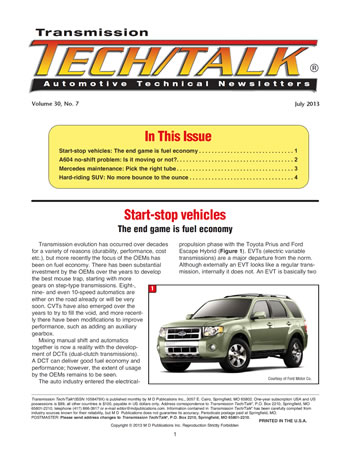 In This Issue
Start-stop vehicles: The end game is fuel economy
A604 no-shift problem: Is it moving or not?
Mercedes maintenance: Pick the right tube
Hard-riding SUV: No more bounce to the ounce

Transmission evolution has occurred over decades for a variety of reasons (durability, performance, cost etc.), but more recently the focus of the OEMs has been on fuel economy. There has been substantial investment by the OEMs over the years to develop the best mouse trap, starting with more gears on step-type transmissions. Eight-, nine- and even 10-speed automatics are either on the road already or will be very soon. CVTs have also emerged over the years to try to fill the void, and more recently there have been modifications to improve performance, such as adding an auxiliary gearbox.

Mixing manual shift and automatics together is now a reality with the development of DCTs (dual-clutch transmissions). A DCT can deliver good fuel economy and performance; however, the extent of usage by the OEMs remains to be seen.

The auto industry entered the electrical-propulsion phase with the Toyota Prius and Ford Escape Hybrid (Figure 1). EVTs (electric variable transmissions) are a major departure from the norm. Although externally an EVT looks like a regular transmission, internally it does not. An EVT is basically two big electric motors and not much else –steel related, that is. The Toyota Prius electrical controls (inverter etc.) are external whereas the Ford Escape controls are internal. Modules, capacitors, circuit boards and more make the Escape look like the space shuttle.

Another type of EVT, developed by GM, is the 2ML70. The 2ML70 (two-mode transmission) is literally a four-speed automatic with two big electric motors in between. The 2ML70 is beefy enough to handle a full-size truck and yet provide good fuel economy.

A front-wheel-drive two-mode, the 2MT70 was released in 2009 at Saturn, but with limited volume due to the demise of Saturn and the changing situation at GM. The 2MT70 (Figure 2) was actually the predecessor of the Chevy Volt transmission.

The current round of EVs (electric vehicles) such as the Chevy Volt and Nissan Leaf is an entirely new direction of the automobile, all for the sake of fuel economy.

All these substantial changes over the years have resulted in varying degrees of fuel-economy gains; however, other less-flamboyant changes have also contributed to the gas savings.

One such development to maximize fuel economy has been START-STOP technology. Although start-stop has been slow to materialize in the U.S., it has been a growing vehicle option in Europe for more than a decade.

On par, the technology involved with the start-stop feature is much more cost effective, and the fuel-economy gains as profound, than some of the more-noteworthy enhancements to date. The ability to sit at a traffic light or railroad crossing with the engine off and not burn fuel is a great solution to the gas problem.

It sounds good on paper; however, nothing is ever that simple. Once the engine shuts off, certain systems have to be addressed, such as keeping the radio playing. Obviously, more-important systems and circuits have to remain active, though. What does start-stop have to do with the transmission?

When the engine shuts off, the pump quits rotating and line pressure goes bye-bye. Without line pressure, clutch packs release, circuits drain and electrical components cease to operate. Once the engine restarts a lag time would occur before the vehicle would move and the driver would be really unhappy with the abrupt jerking.

One answer to the problem is adding an auxiliary pump (Figure 3). An auxiliary pump is designed so that once the engine shuts off, the pump – which is also an electric motor – starts up to provide the needed line pressure for component application. Then when the internal-combustion engine (ICE) restarts there is no hesitation of movement by the transmission. The auxiliary pump then shuts off.

The 2ML70 was one of the first GM EVT transmissions to be outfitted with the auxiliary pump. The 2MT70 was also designed with an auxiliary pump, as illustrated in Figure 3.

The question becomes, is it really necessary to have a rather complex transmission design benefit from the start-stop feature? Even before the two-modes were launched in 2007 and 2009 respectively, GM released a variation of the good old, plain-Jane 4L60-E with the start-stop option.

The 4L60-E PHT (partial hybrid transmission) hit the economy-driven street in 2005. An electric motor was added to the bellhousing area, but not for the same reason as the electric motors in the 2ML70 or 2MT70. The main purpose of the PHT motor was for start-stop.

With some minor modifications an internal auxiliary pump and filter (Figure 4) were added to the 4L60-E (code M33) to enable the transmission to maintain line pressure with the engine off. The pump is fairly pricey; however, at least the filter is available separately. Initially, the filter was available only with the pump.

Although the PHT ran only from 2005 to 2007, it demonstrates that start-stop capabilities can be added to just about any vehicle design.

Beginning in 2010, certain models of GM vehicles equipped with the 6T40 (code MHH) have also been produced with an auxiliary pump. Going forward, several vehicles will be equipped with the start-stop option, which will require more diagnostic ability. It is, after all, all about the fuel economy.

A 2005 Pacifica, equipped with a 41TE (A604), arrives at the shop with a no-upshift complaint, a multitude of codes, a noise problem and a speedometer that will register anywhere from 20 to 40 mph with the vehicle sitting still in the parking lot. Good trick, right!

Believe it or not, the component responsible for all these problems has nothing to do with the transmission. It all stems from a faulty alternator.

Normally a transmission shifting problem involves the transmission or related components such as a VSS, TPS or MAF sensor. Other items like connectors or harnesses will also cause problems. On the other hand, an alternator problem is normally limited to a charging issue or electrical-related noise.

In the example listed, this particular alternator failure resulted in a variety of symptoms. The trouble codes that were set ranged from ECM to transmission to body codes. Apparently the inconsistent charging produced interruptions to the normal electron flow, which can impact virtually all areas of the vehicle.

If, for instance, a diode in the rectifier fails, one of the three phases will no longer exist, resulting in not only the electrical problem but noise as well. The failure in this alternator produced a droning sound. The sound stopped once the field wire was disconnected (Figure 5).

The transmission upshift problem was a result of how the alternator affected the VSS. The shifter would be placed in drive and the speedometer would actually shoot up to 20, 30 and even 40 mph. With the speedo indicating movement, the field wire was again removed and the needle would slowly drop back to zero. The incorrect VSS signal would cause the TCM to go into failsafe and the transmission would quit shifting. Figure 6 shows what the speedometer read sitting still, although the speed did vary at different times.

So the next time a vehicle appears to be moving when it is not, donʼt blame the transmission or speedo; the problem just may be under the hood.

A later-model Mercedes arrives at a shop for a routine engine oil change or transmission-fluid change. Upon completion of the service, big problems arise, such as no engine oil pressure or the transmission will not apply.

“Know the tube.” Beginning in 2001/2002, certain models of Mercedes vehicles have the fill tubes arranged in such a manner that it is easy to mistake one for the other. The primary models that use the side-by-side tube arrangement are C class and E class; however, other models use this as well.

To make matters worse, the markings of the caps are not entirely consistent either. The cap on the engine oil tube can be red directly from the factory but may be black as well, depending on year and model. Replacement caps are black to boot.

Factory transmission caps are black but when replaced are black with a red lock tab (Figure 7). Probably the best way to determine which tube is which is by length. As illustrated in Figure 7, the engine oil tube on the left is taller than the transmission tube on the right. The point is to make sure which is which before dumping in the oil/fluid.

It is amazing to run into this type of problem, with all the other potential hassles that a shop can experience today; however, it does happen. Mercedes vehicles are also among those that generally are not equipped with dipsticks. A tool, not a dipstick, is required to check the transmission fluid, but the outcome is the same.

When servicing any Mercedes use the correct oil/fluid and the proper checking tool, and by all means pick the right tube.

After repairs to specific GM SUVs that were required to be on the lift for a period of time, the vehicle fails to return to the proper curb height and the ride is extremely hard during the road test.

The front struts of the SUV fail to collapse back to the original position and lose their ability to move up or down and conform to road conditions.

Beginning with the 2007 and up Acadia (Figure 8), Enclave, Outlook and Traverse SUVs, the front struts have shown a tendency to malfunction under certain conditions.

If the vehicle is in an area of sustained high temperatures for a period of time or is subjected to continuous up-and-down movement due to rough roads or off-highway driving, internal damage of the struts can occur.

An internal component called a rebound bumper can deteriorate and produce a fine sediment. Under normal conditions, this sediment remains suspended in the fluid of the strut and does not really cause any noticeable problems – at least for a while.

One option to avoid this problem is to somehow put straps or chains around the struts to keep them from fully extending. It would be a better option than partially reassembling the vehicle, just to lower it back to the ground temporarily. In any case, advising the customer of this potential may not be a bad practice. After all, a strut in good condition will not fail after being on a lift for a period of time.

With all the expensive major work done and the transmission functioning correctly, just be sure that the vehicle still has “bounce to the ounce.”