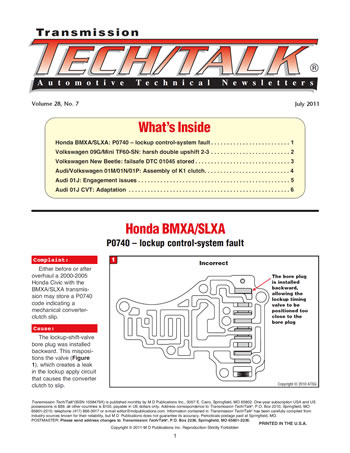 Either before or after overhaul a 2000-2005 Honda Civic with the BMXA/SLXA transmission may store a P0740 code indicating a mechanical converter-clutch slip.

The lockup-shift-valve bore plug was installed backward. This mispositions the valve (Figure 1), which creates a leak in the lockup apply circuit that causes the converter clutch to slip.

Install the lockup-shift-valve bore plug as shown in Figure 2. You can see the difference in the position of the lockup shift valve when the bore plug is installed correctly as compared with the incorrectly positioned valve in Figure 1.

Note: A P0740 code can also be caused by leaking bore plugs. Sonnax® produces bore plugs with O-rings on them as well as interference plugs for the bore plugs that cannot have an O-ring because of their design.

Before or after overhaul a Volkswagen or Mini vehicle equipped with the TF60-SN automatic transmission may exhibit a complaint of a harsh or double-bump 2-3 upshift.

One cause may be a defective SV-3/N90 solenoid causing the K3 clutch to be applied in first and second gears. With the K3 clutch already applied, the computer is unable to properly control the shift transition from 2nd to 3rd, and this results in a harsh or double-bump 2-3 upshift.

Refer to the clutch-application diagram in Figure 3. Notice that the K3 clutch is not supposed to be applied in first or second gear. Conventional wisdom might suggest that if a friction element is applied when it should not be a bind-up condition should occur.

To determine whether the SV-3/N90 solenoid is the cause of this problem you will need to install a pressure gauge onto the K3 clutch port of the transmission and drive the vehicle to see whether pressure is present in first or second gear. Refer to the diagram in Figure 5 and install the pressure gauge. When the selector lever is placed into the drive position, there should be 0 psi at the K3 pressure port. Additionally, there should be 0 psi when the transmission makes an upshift into second gear. If there is pressure in either first or second gear it will be necessary to check the solenoid-current pattern. If the solenoid-current pattern is correct, this will conclusively identify shift solenoid SV-3/N90 as the cause of the complaint.

Using the diagram in Figure 6, refer to the solenoid amp chart and locate the current pattern for solenoid SV-3/N90. You will notice that the current pattern indicates about 0.980A or very high current in first and second gears and the amperage is switched to 0.100A or very low current in third gear. It will be necessary to perform this amperage check using an appropriate tool such as a portable laptop computer with the VAG-COM software installed. If the current pattern indicated by the scan tool shows correctly, the harsh or double-bump 2-3 upshift can be isolated to a malfunctioning SV-3/N90 solenoid.

The quickest way to diagnose this problem is to first take a look at the shifter (Figure 7). There is a black flexible plastic alignment guide that serves as a locator for the Tiptronic switch. If the plastic guide is missing or damaged the shifter assembly will need replacement. If the plastic guide appears to be in good shape further electrical diagnosis of DTC 01045 Tiptronic switch F-189 requires the use of scan-tool software such as VAG-COM or other capable hand-held scan tool.

The diagram in Figure 8 depicts a typical onscreen display during use of VAG-COM software. It will be necessary to navigate to control module 2 Auto Trans, Group 8, Data Blocks 12 and 13. Move the shifter through its gear selections including Tiptronic mode using the tip-up and tip-down function while monitoring data on the scan tool. If abnormality is found in switch function, shifter assembly must be replaced.

If need for replacement of the Tiptronic switch is determined, a new shifter assembly must be bought from the dealer. Refer to Figure 9 for the parts that will need to be replaced.

Note: Parts listed in Figure 9 are sold as an assembly and must be ordered from the dealer using VIN for appropriate trim package for the vehicle.

After overhaul the transmission experiences a bind-up on the 3-4 shift and a bind-up in reverse.

Incorrect assembly of the K1 clutch is responsible for these complaints.

During the 1995 model year the Phase 2 redesign of the K1 clutch took place. The obvious difference was that the K1 drum now did not have a shaft. With the new design, the K1 and K3 drums had to be pressed apart. Other differences are mainly dimensional. The K1-clutch pack is assembled as follows:

No reverse with VAG Code 17090 stored for a Multi-Function Switch Implausible Signal. Note: The multifunction transmission-range sensor has four Hall-effect sensors that are controlled by a magnetic gate in the rooster-comb area of the selector shaft. The signals from the sensors are interpreted in the same way as the positions of mechanical switches either open or closed.

With four sensors, a total of 16 open and closed combinations can be obtained. Six combinations are used to inform the TCM of Park, Reverse, Neutral and Drive manual-valve selection as well as intermediate-movement positions from Park to Reverse and a movement from Reverse to Neutral to Drive. The other 10 possible combinations are reserved as being faulty.

A delayed engagement or shudder into drive.

The transmission control module is faulty.

Adaptation must be performed after the following operations:

Adaptation for reverse is to be performed with the same procedure as for forward.