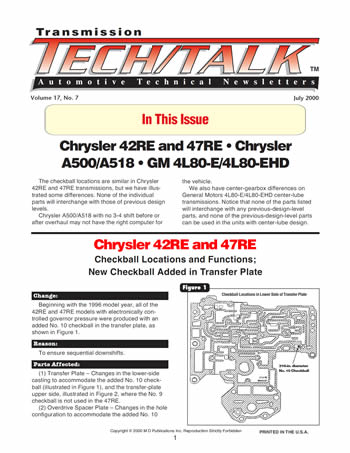 The checkball locations are similar in Chrysler 42RE and 47RE transmissions, but we have illustrated some differences. None of the individual parts will interchange with those of previous design levels.

Chrysler A500/A518 with no 3-4 shift before or after overhaul may not have the right computer for the vehicle.

Beginning with the 1996 model year, all of the 42RE and 47RE models with electronically controlled governor pressure were produced with an added No. 10 checkball in the transfer plate, as shown in Figure 1.

(2) Overdrive Spacer Plate – Changes in the hole configuration to accommodate the added No. 10 checkball, as illustrated in Figure 3.

(3) Overdrive Valve Body – Casting changes to accommodate the added No. 10 checkball, as illustrated in Figure 5.

None of the individual parts listed will inter-change with previous-design-level parts. A complete service package will back-service any 42RE or 47RE.

Figure 6 shows the checkball locations in the main valve body.

Figure 7 describes each checkball and its function.

No 3-4 shift before and after rebuild.

A bad VSS, TPS, ECT, OD-cancel switch, solenoid and/or solenoid gasket, ignition switch or park/neutral switch is the primary cause of no 3-4 shift or TCC apply. But in many instances, early-model trucks have been equipped with an incorrect SMEC (single-module engine controller) at the factory (See Figure 8). Vehicle owners may be unaware that there was no 3-4 shift. After overhaul, the technician struggles to correct this condition. At some point the computer is determined to be defective. When a new computer is installed, it also may not be the right one.

Beginning at the start of production for the 1997 model year, all 4L80-E/4L80-EHD transmissions were produced with a center lube, in addition to front and rear lube. This bulletin covers some of the changes that occurred in the center-gearbox area.

To provide a more-desirable distribution of lube flow to the center of the transmission.

(2) Sun Gear – Has larger lubrication passages on the inside splines of the sun gear, and the new design has a smaller hole between the gears, as shown in Figure 10.

(3) Rear Ring-Gear Shaft – The lube holes that were cross-drilled in the previous shaft, and the lube passage through the center, have been eliminated in the new-design shaft, as shown in Figure 11.

(4) Rear Internal Ring Gear – New design level has lube passages cut through the area where the shaft splines into the ring gear, and cut into the bearing race that goes on the internal ring gear in this location, as shown in Figure 12.

(5) Output Shaft – New design has eliminated the lube hole that was present in the previous models, as shown in Figure 13.