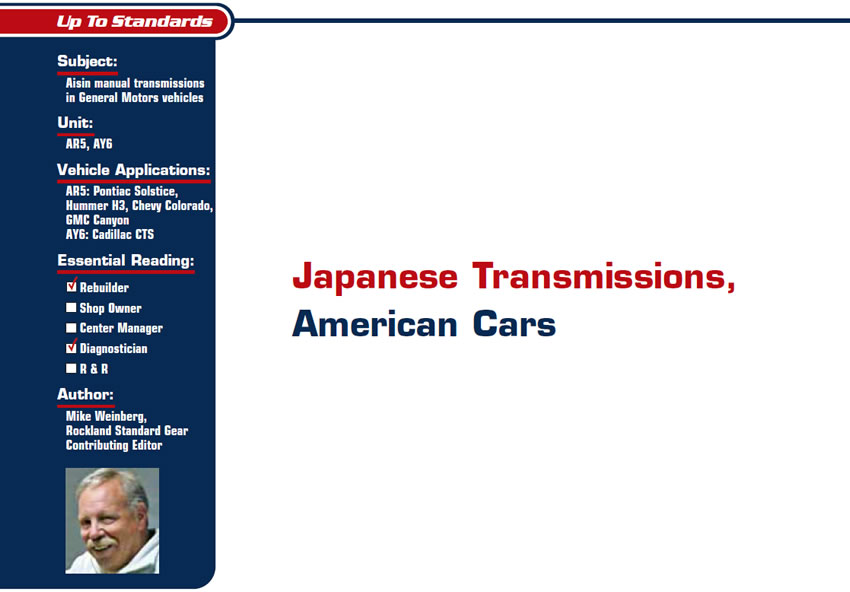 In the past, manufacturers of low-volume vehicles such as Rolls Royce and Jaguar used GM transmissions and A/C systems rather than design and develop their own. The trend has enlarged and continued so that the automakers looking to cut costs and increase efficiency are relying more on their tier-one suppliers to design and develop complete components such as transmissions and transfer cases. This has created a growth in units of a common design now showing up in many different vehicle platforms, from U.S.-built to imported brands.

As everyone in our business must have noticed by now, the automakers have changed their approach to car manufacturing. Known in the press as “globalization,” this trend has been in existence for decades but is now much more concentrated.

In the past, manufacturers of low-volume vehicles such as Rolls Royce and Jaguar used GM transmissions and A/C systems rather than design and develop their own. The trend has enlarged and continued so that the automakers looking to cut costs and increase efficiency are relying more on their tier-one suppliers to design and develop complete components such as transmissions and transfer cases. This has created a growth in units of a common design now showing up in many different vehicle platforms, from U.S.-built to imported brands.

One of the suppliers that is leading the field in manual transmissions is Aisin World Corp. A large Japanese manufacturer of automotive components, Aisin has many divisions building everything from clutches and water pumps to transmissions and transfer cases. Aisin AI Co. Ltd. is the manufacturing arm that is producing manual transmissions, and other branches build a wide variety of automatic transmissions used by many carmakers. What this means is that we will see the same basic transmission design showing up in a number of different vehicles. Although this does not make the parts interchangeable, it is easier for us to work on a familiar design with confidence.

On the rear-wheel-drive platforms, all these designs are evolutionary changes to the AX5 and AX15 units we have been working on for years. These units became common in Jeep products, with a variation used by Toyota. If you review the application chart below you will see that these units are now used by Toyota, Hino, Suzuki, Mazda, Isuzu and General Motors. Aisin also manufactures front-wheel-drive five- and six-speed units for Toyota, Mazda and Mitsubishi. This article is concerned with the five- and six-speed rear-wheel-drive units that you will see in GM vehicles and that also will be found in import brands.

The basic design was created with the AX5 and later improved with the AX15. These are “center-support” transmissions, having an aluminum extension housing and aluminum transmission main case, separated by a steel or aluminum center support that houses the shift rails and interlock system as well as the mainshaft and countershaft center-support bearings. This is an excellent design that has proved to be smooth shifting and durable over the design run.

As vehicles became more expensive and owners demanded higher levels of quality, Aisin responded with the AR5 five-speed (see Figure 2) and AY6 six-speed (see Figure 3) models. Based on the AX15 design, the AR5 shift mechanism still has a main shift rail that operates four internal shift rails to select the desired gears. On the AR5, which you will see in the Pontiac Solstice, Hummer H3, Chevy Colorado and GMC Canyon models, fifth gear is overdriven. On the six-speed AY6, which is available on the Cadillac CTS models, sixth gear is overdriven. This design departs from the center-support design and is closer to a Tremec T56.

All these units offer light weight and torque capacity that can handle more than needed for the job at hand. The main difference from the original AX15 design is improved synchronizer capacity. Aisin uses multi-piece synchronizers in these units. We are all by now familiar with having two or three synchro rings for each speed gear, which increases the holding capacity of the synchronizer without having to make a wider gear package.

One of the main parameters of transmission design is strength in as small a package as possible. When the designs are being drawn up the manufacturer must make them compatible with the architecture of the vehicle so that it works with all the surrounding components and does not create intrusion into the passenger compartment. In the application chart above you will see figures in millimeters called C.D. This is the measurement of the centerline distance between the mainshaft and the cluster gear. This distance sets the pattern for how large the gear diameter will be and how much torque load the geartrain can handle.

The AR5 unit has an 82mm CD, which translates into 3.23 inches. The AH5, which is found in the Toyota Land Cruiser, has a CD of 101 millimeters, about 4 inches. The greater the CD, the greater the torque capacity of the transmission.

The AR5 is available in two- and four-wheel-drive configurations and has several shifter locations. On the Pontiac Solstice the shifter is contained in a fifth aluminum housing that is remote from the transmission to locate the stick properly in the passenger compartment (see Figure 4). In Mazda and other GM units the shifter will be in a different position although the design and operation of the transmission are the same. Figure 5 illustrates the shift components.

The AY6 also uses a main shift rail with four internal shift rails to select the six forward speeds and reverse. Figure 6 shows a synchronizer assembly used in the AY6.

Please note that both of these units are specified to be filled with 75W-90W gear oil. It is our experience that this lube will create cold-shift problems and other undesirable complications. We specify GM synchromesh fluid in all our Aisin reman units with excellent results.

What appears to be new is really an evolution of the old. With the many vehicles using Aisin transmissions, you will find yourself working with an updated design of a familiar product. No one can afford to turn work away because it is an import or something new to us. The information is available and the units are not hard to build. With such a broad product range using these units, they will eventually be an add-on to your services.