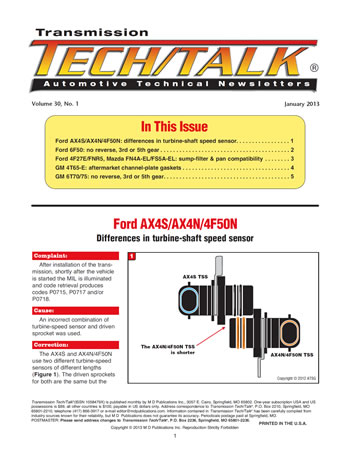 After installation of the transmission, shortly after the vehicle is started the MIL is illuminated and code retrieval produces codes P0715, P0717 and/or P0718.

An incorrect combination of turbine-speed sensor and driven sprocket was used.

The driven sprockets for both are the same but the TSS reluctor is pressed into the sprocket at two different depths (Figure 2).

Note: If a 4F50N has an incorrect driven sprocket installed, an AX4S/N TSS connector can be spliced in to avoid transmission removal.

The weld holding the sun gear to the shell has broken (Figure 4).

Replace the sun gear shell with the updated assembly (Figure 5), using the part number provided under “Service information.” The No. 3 thrust bearing will be pack-aged with the sun-gear shell.

After transmission work has been performed, the vehicle has a slipping condition during turns.

An incorrect combination of pan and filter was used.

The sump filter that is compatible with this pan, also in Figure 7, has the short pickup spout.

The FNR5/FS5A-EL pan in Figure 7 is the deep pan and has a drain plug. The sump filter that is compatible with this pan, also in Figure 6, has the long pickup spout. This pan also has brackets in the bottom. The pickup tubes on both filters are the same, making it easy to switch them.

To prevent gasket blowout due to imperfections in the transmission case and channel-plate-gasket sealing surfaces (Figure 8).

The upper and lower channel-plate gaskets.

The rubber-coated metal channel-plate gaskets will be included in most aftermarket overhaul kits once the stock of kits with paper gaskets is depleted.

A vehicle equipped with the 6T70/75 may come in with a complaint of no reverse engagement and no third or fifth gear or slipping badly in third and fifth gears. The SES lamp is illuminated and code P0776 for pressure-control solenoid B stuck off is retrieved.

In addition, any one of the following codes may also be stored:

Upon disassembly of the transmission several damaged parts are found, including but not limited to the 3-5-Reverse drum and piston return-spring assembly and the transmission end cover (figures 10, 11, and 12).

The 3-5-Reverse wave plate has broken, allowing the piston to over-stroke.