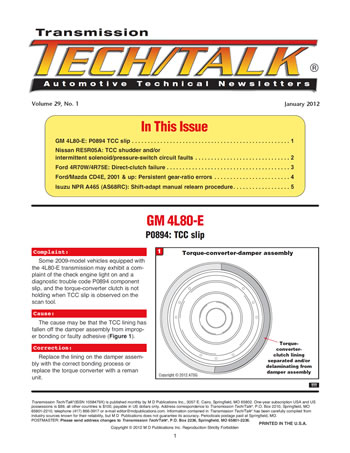 Some 2009-model vehicles equipped with the 4L80-E transmission may exhibit a complaint of the check engine light on and a diagnostic trouble code P0894 component slip, and the torque-converter clutch is not holding when TCC slip is observed on the scan tool.

The cause may be that the TCC lining has fallen off the damper assembly from improper bonding or faulty adhesive (Figure 1).

Replace the lining on the damper assembly with the correct bonding process or replace the torque converter with a reman unit.

Late-2004-and-up Nissan vehicles equipped with the RE5R05A transmission may exhibit a complaint of torque-converter-clutch shudder along with intermittent solenoid-circuit and/or pressure-switch faults, which may result in limp mode. Figure 2 provides a list of possible codes.

The cause may be that the transmission cooler in the radiator has ruptured, causing water to be mixed into the transmission fluid. This can cause the TCC linings to delaminate, resulting in TCC shudder. This same cause also may create the intermittent solenoid-circuit or pressure-switch faults by means of the water intrusion into the transmission control module, which is mounted on top of the valve body (figures 3 and 4).

To correct this condition, both the transmission and torque converter will need to be overhauled. Refer to Figure 4 for solenoid location and resistance values. If there is a solenoid-circuit fault for a specific solenoid, locate it in Figure 4 and verify that resistance is correct. If resistance is correct, the TCM may be faulty and will have to be replaced. Refer to Figure 3 and note that the pressure switches are part of the TCM and cannot be tested without the use of a scan tool.

Note: There may be instances where the vehicle will come into the shop and there will be NO solenoid-circuit faults and the transmission will have water intrusion. The vehicle could leave the shop for a month and everything be fine but suddenly start setting solenoid-circuit faults. Refer to Figure 4 and verify that the solenoid in question has the correct resistance. If it is good the TCM will have to be replaced. Make sure the customer is aware that the TCM may go bad if there was water intrusion and there may be an additional cost down the road.

Contact your local Nissan dealer, as the TCM is not available separately from the valve body.

The vehicle may come into the shop slipping in third gear. Upon disassembly of the transmission the direct clutch is found to be badly burnt. The transmission is rebuilt and the vehicle is released.

The vehicle returns within the warranty period with the same complaint. Upon disassembly of the transmission, the direct clutches are again badly burnt.

For the 2001 model year Ford eliminated the 2-3 capacity modulator and orifice-control-valve lineup, and the bore was cast shut. At the same time the small stiffener plate was also eliminated because it was assumed that with that valve lineup, the additional support was not necessary.

In the area of the valve body where the small stiffener plate has been eliminated, oil cross-leaking into those unused cavities will flex the spacer plate upward as much as 0.010 inch and force it against the 2-3 accumulator cover. This is what causes the crater and the cracks.

You can verify this by observing a pressure gauge on the direct-clutch pressure port when the transmission is not in third gear. If a significant amount of oil is present, it is the spacer plate flexing.

Replace the spacer plate. Several aftermarket sources make this plate with their own method of fixing the flexing problem.

After overhaul, 2001-up vehicles equipped with the CD4E transaxle may exhibit a complaint of gear-ratio-error code P0731, P0732, P0733 or P0734 and the transmission tries to shift to third but then downshifts back to second or first gear. After these codes are cleared, they immediately return during the road test. The speedometer also will read in Park if the engine is revved up, and/or it is noticed that the speedometer is about 15-20 mph slow.

The cause may be that during installation of the transmission, the turbine-speed-sensor harness connector was connected to the output/vehicle-speed sensor, and the output/vehicle-speed-sensor harness connector was connected to the turbine-speed sensor, as the connectors are identical and the harnesses are long enough to cross-connect. The previous-design VSS was on the opposite side of the trans, which made it impossible to cross-connect. The new-design OSS/VSS was used in 2001-up models.

Refer to Figure 7 for a sample wiring schematic showing the wire colors for these two sensors.

Figure 8 shows the location of the previous-design and new-design VSS.

Refer to Figure 9 for a close-up of the TSS and VSS and their connectors. Verify that each harness is connected to the correct sensor.