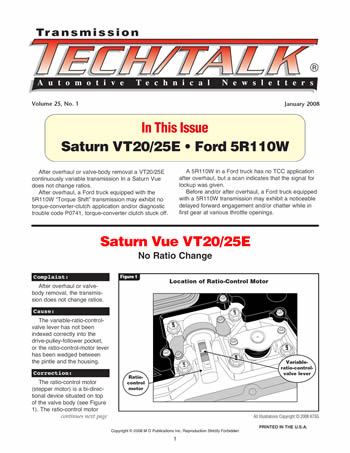 After overhaul or valve-body removal, the transmission does not change ratios.

The variable-ratio-control-valve lever has not been indexed correctly into the drive-pulley-follower pocket, or the ratio-control-motor lever has been wedged between the pintle and the housing.

The ratio-control motor (stepper motor) is a bi-directional device situated on top of the valve body (see Figure 1).

The ratio-control motor indexes with a lever that is attached to the variable-ratio-control valve in the valve body (see Figure 2).

The opposite end of this lever then sits inside a pocket of the drive-pulley follower, as shown in Figure 3 from the valve-body side of the case with the valve body removed.

This spring-loaded follower rides on the movable drive-pulley half as shown in Figure 4 and reacts to the movement of the drive pulley as it changes ratios.

With one end of the lever being in the ratio-control motor and the other end being in the drive-pulley follower (refer to Figure 5), the follower acts as a movable pivot point for the lever. As a result of this action, it becomes a mechanical sensor influencing the variable-ratio-control valve, tailoring the feed fluid into the drive-pulley piston.

When the valve body is installed so that the lever of the variable-ratio-control valve misses the drive-pulley-follower pocket, the valve is unable to respond to the movement of the ratio-control motor, preventing ratio changes by the pulleys and keeping the transmission in low range.

After overhaul, Ford trucks equipped with the 5R110W “Torque Shift” transmission may exhibit no torque-converter-clutch application along with diagnostic trouble code P0741, torque-converter clutch stuck off.

Refer to Figure 6, which shows incorrect and correct installation of the retainer, and ensure that the feed holes in the sleeve are visible.

Refer to Figure 7 for a break-down of the complete pump assembly and location of the torque-converter control-valve lineup.

After overhaul, there is no TCC application. The scan tool indicates that the signal for lockup was given but no speed drop took place, which is confirmed by the storage of code P0741 for TCC stuck off.

A small piece of metal debris from the original transmission damage has finally come loose from the cooler and lodged in the TCC feed hole of the solenoid-body gasket (refer to figures 8 & 9).

Make certain the cooler has been flushed thoroughly and the inline filter, in the cooler-line manifold, has been replaced. Be aware of auxiliary oil-to-air coolers; if the transmission sustained severe damage, they may not flush satisfactorily and will require replacement.

Note: Reusing the solenoid gasket after washing it in solvent is not recommended, as we have had complaints of the rubber beading becoming deformed.

Before and/or after overhaul, a Ford truck equipped with a 5R110W transmission may exhibit a noticeable delayed forward engagement and/or chatter while in first gear at various throttle openings.

The cause may be a poor seal at the forward-clutch sealing rings (see Figure 10).

Check and verify that there are no line-pressure and rise problems that may indicate a faulty pressure-control solenoid, sticking pressure-regulator valve or boost valve, or faulty oil pump.

Carefully inspect the forward-clutch housing, the piston and the seal-ring area in the center support for any wear or damage, and repair or replace as necessary.

Place the completely assembled forward-clutch housing into the center support and air-check the forward clutch through the support to see whether excessive leakage is occurring.

If you detect excessive leakage, you may be able to resolve the problem by replacing the original step-cut-style sealing rings with a pair of solid endless-style rings for use between the stator support and reverse-input-clutch drum in a GM 4L60-E transmission. The sizing tool for the 4L60-E rings also can be used to ensure proper fit. After installing and sizing the new rings, check for a slight drag when installing the forward-clutch housing into the center support, and perform the air check again to see a noticeable difference.