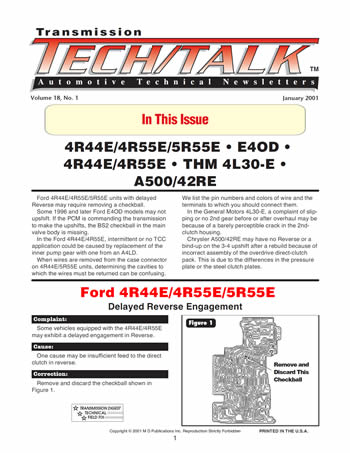 Some 1996 and later Ford E4OD models may not upshift. If the PCM is commanding the transmission to make the upshifts, the BS2 checkball in the main valve body is missing.

In the Ford 4R44E/4R55E, intermittent or no TCC application could be caused by replacement of the inner pump gear with one from an A4LD.

When wires are removed from the case connector on 4R44E/5R55E units, determining the cavities to which the wires must be returned can be confusing. We list the pin numbers and colors of wire and the terminals to which you should connect them.

In the General Motors 4L30-E, a complaint of slipping or no 2nd gear before or after overhaul may be because of a barely perceptible crack in the 2nd-clutch housing.

Chrysler A500/42RE may have no Reverse or a bind-up on the 3-4 upshift after a rebuild because of incorrect assembly of the overdrive direct-clutch pack. This is due to the differences in the pressure plate or the steel clutch plates.

Some vehicles equipped with the 4R44E/4R55E may exhibit a delayed engagement in Reverse.

One cause may be insufficient feed to the direct clutch in reverse.

Remove and discard the checkball shown in Figure 1.

Before or after overhaul, some 1996 and later Ford Motor Co. vehicles that are equipped with the E4OD transmission may have no upshift with the shift selector in Drive.

If you have determined that the PCM is commanding the transmission to make the upshifts, the cause may be that the BS2 checkball in the main valve body is missing (See Figure 2).

Install the 1⁄4-in. green rubber checkball in the location shown in Figure 2.

Vehicles equipped with 4R44E/4R55E may exhibit a slipping and/or no converter-clutch apply along with code 628 or P0741 stored in the PCM.

Somehow, the internal wires that go through the transmission-case connector were removed or disconnected from the internal side of the connector, and no one has a hint as to which cavities they must be put back into.

What caused the wires to be disconnected at this point really doesn’t matter; we just have to get them reconnected. Figure 4 is a connector-pin identification chart.

Figure 6 identifies the locations of all the solenoids and the fluid-temperature sensor on the valve body.

Before and/or after overhaul, the vehicle exhibits a slipping condition when going into second gear or possibly has no second gear.

The cause may be a barely perceptible crack in the 2nd-clutch housing (See Figure 7).

Replace the 2nd-clutch housing as necessary.

After rebuild, the transmission has no reverse or binds up on the 3-4 shift.

If all second-design steels and pressure plates are being used, refer to the chart in Figure 10 to identify the OD direct-clutch housing that you have, and the number of steel plates and lined plates for that housing.

There are four different overdrive/direct-clutch housings, with the specific one used depending on the engine size and the transmission model. If it becomes necessary to replace the drum, measure the distance between the top of the snap-ring groove and the top of the housing (Refer to Figure 9), and use the chart in Figure 10 to determine the number of friction plates and steel plates for the model you are working on. Choosing the wrong number may create either a tie-up on the 3-4 shift or no reverse. The number of lined and steel plates is based upon second-design parts.

Always use special tools and proper procedures to measure and determine the thickness of the over-drive-piston shim that your setup requires. An incorrect shim selection also may cause the complaint listed.