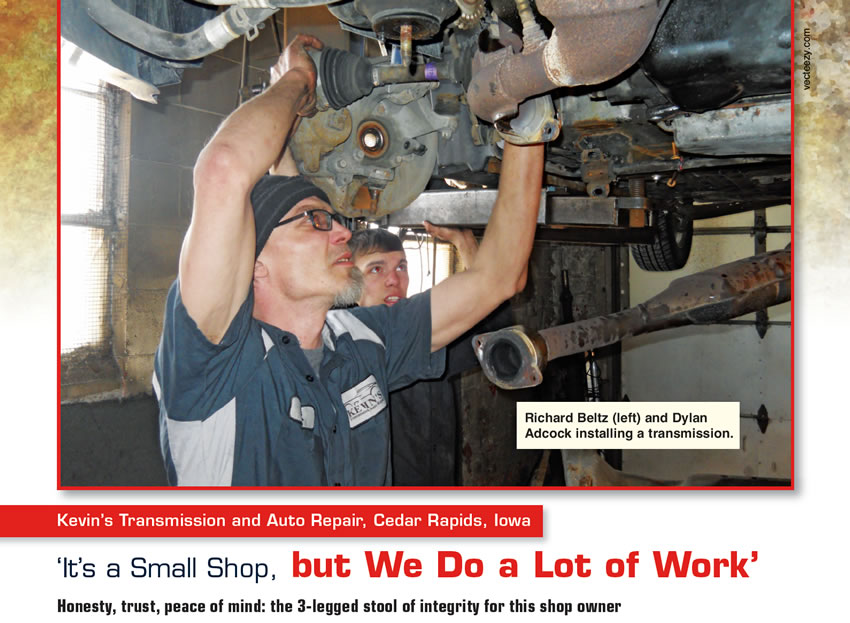 The fact that Kevin Sanborn Sr.’s shop received a Better Business Bureau Iowa 2015 Integrity Award is really all you need to know about him — although there is more.

Honesty, trust, peace of mind: the 3-legged stool of integrity for this shop owner

The fact that Kevin Sanborn Sr.’s shop received a Better Business Bureau Iowa 2015 Integrity Award is really all you need to know about him — although there is more.

He worked for a transmission repair chain for 22 years.

Then he started his own business in 1992, and ever since, he’s been in the same spot at the repurposed gas station in Cedar Rapids, Iowa. He has improved the equipment and expanded the space. “It’s a small shop, but we do a lot of work,” he said.

He once was a racer. “I used to play around with about every motor sport there was, it seems like, anything from demolition derbies to racing stock cars.” Now his idea of fun is to relax in his cabin up north.

Mostly, he has been building a reputation for professionalism in his business. His website trumpets a three-point progression: Honesty, trust, peace of mind.

Word of mouth has been his marketing program.

“I have people call up and say they talked to three different people, and they all said go to Kevin’s Transmission,” he said, “mainly because we’ve been here so long and done a good job over the years as far as building that relationship with customers.

“Not every transmission is an overhaul. You don’t have to do that, I feel. We check a lot of stuff and we don’t charge anything for an external check. We even check things that many times aren’t transmission oriented and refer them to another business if we don’t do that kind of repair.

The office and waiting room comprises the original gas station. The addition in the back is where all the work is done. The shop has three lifts and six other bays. Almost all of Kevin’s work is in transmission, half of it is in building, the other half is in service.

Good employees: “That is so very important to a good business,” he said. “Getting good, qualified people who’ll stick with you, and we’ve been fortunate enough to have that. I could not have success without them.” Kevin stresses the importance of training for new technology, electronics and software.

In addition to daily-driver customers, they also have motorists with RVs, off-road and stock cars.

“We do a lot of older car work, older street-rod work,” he said. “I’ve got street rods and I’m a member of a club. A lot of people will take their cars to somebody who has those vehicles to work on, instead of someone who doesn’t. So we get muscle cars, which is always fun.”

Kevin has decided not to work on CVT’s and German and Swedish vehicles due to lack of equipment, but one-third of the vehicles they service are imports.

The shop handles a few fleet accounts for transmissions, but companies usually prefer to take vehicles to one place to get everything done. Kevin’s does not do major engine work.

In any case, Kevin sees customers from places 60 miles away. Within that radius are towns such as Olin to the east and Belle Plaine and Marengo to the west. He has plenty of customers from metro Cedar Rapids, with a population of more than 250,000.

“When I opened this place, I used savings and borrowed more and opened it on a shoestring,” he said. “I told my two boys to find other jobs because if I went down, I wouldn’t drag them with me. We hit the ground running and never looked back. We built one heck of a good business over the years.”

The family has just recently begun to look into retirement and the related decisions about the business.

“I’d like to retire in the next few years. But I’ve worked all my life. I don’t know what else I’d do,” he said. “My wife seems to think there’s something we could do” (laughs).

One thing he knows is that he won’t be handing down the business to a family member. Both of his sons are established in their work, one an electrician, the other a plumber.

Considering long-term goals, Kevin said, “I bought the building, I’ve got all my equipment. The long-term goals are pretty much met. I don’t have any plans for anything in the next five years.

As for short-term goals, he’s dedicating himself to servicing transmissions in a way that is professional, prompt and honest. That’s how he became a BBB Iowa 2015 Integrity Award winner. A customer who had a transmission rebuilt at Kevin’s Transmission nominated Kevin for the award.

“Honesty builds trust, and with that, you should have peace of mind. People go away from here feeling that they got a good, honest service. That, to me, is a lot.”