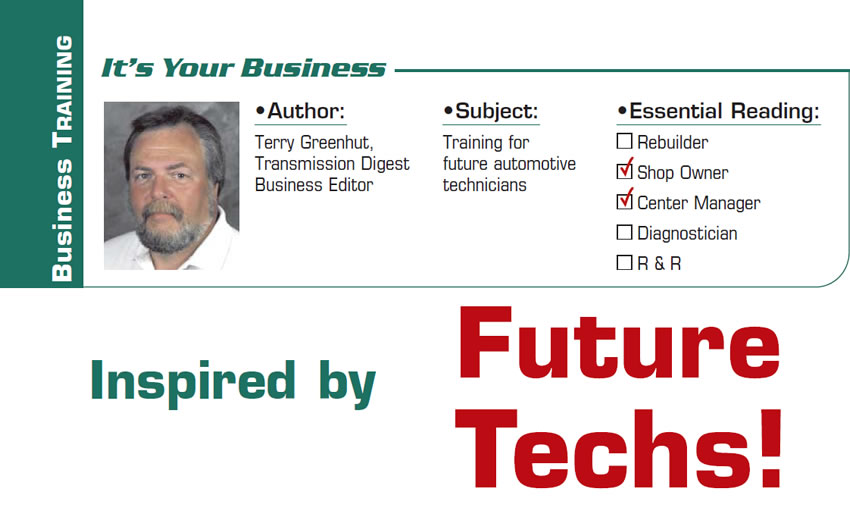 In Queens, a borough of New York City, there is a $28-million state-of-the-art facility known as the Center for Automotive Education and Training that was erected to train present and future technicians, service advisers and basically all other personnel who man an automotive dealership. It is owned by the Greater New York Automobile Dealers Association (GNYADA), a group of more than 600 member dealers who, among other things, produce the New York Auto Show each year, arguably the largest new-car auto show in the country and perhaps the world, where the public gets its first look at the new models and the dream cars the designers have come up with and show off as prototypes.

In Queens, a borough of New York City, there is a $28-million state-of-the-art facility known as the Center for Automotive Education and Training that was erected to train present and future technicians, service advisers and basically all other personnel who man an automotive dealership. It is owned by the Greater New York Automobile Dealers Association (GNYADA), a group of more than 600 member dealers who, among other things, produce the New York Auto Show each year, arguably the largest new-car auto show in the country and perhaps the world, where the public gets its first look at the new models and the dream cars the designers have come up with and show off as prototypes.

Last week I was invited to and attended the fifth anniversary of the completion and dedication of the building. It was a pretty big deal. Several local politicians who helped clear the way for it to be built were in attendance along with GNYADA’s board of directors and dignitaries from the school that rents a good portion of the building from the organization, Lincoln Technical Institute. Lincoln Tech is an academy that trains entry-level technicians for the entire auto-repair industry, making the facility a great venue for training all levels of the automotive aftermarket.

There was a terrific buffet breakfast followed by speeches and dedications. The CEO of Lincoln Tech informed us that the school had grown to 42 campuses across the country, partially funded by auto manufacturers but primarily paid for by student tuition. That was the point at which I started to become impressed and inspired. Students actually sign up and pay for a 13-month course that leads to a certificate making them entry-level qualified to work in dealerships and repair or transmission facilities just like yours. Classes are pretty much full, which may be an indicator that jobs in other fields are not plentiful at the moment, but it doesn’t matter. More consumers are having their cars serviced and repaired so they can keep them longer, creating more jobs in our sector, and that’s what’s important to our industry.

At the end of the speechifying we were asked to line up and walk over to the Lincoln Tech side of the building for a tour of the facility. Lining the walkway on both sides were the honor students from the present class, about 100 out of the 700 enrolled. They were all in their work uniforms showing off the patches they receive every time they successfully complete a class. The patches look very similar to the bars that ASE-certified technicians add below the ASE logo on their sleeve. Some of the students who had been there the longest had patches going up and down both arms and stood with their elbows pointed outward so we could see all their achievements as we went by.

Although I understood the achievement patches, one thing I had to stop and ask a student about was the gold stars some of them had on their collars. They resembled those of an army general and ranged from one star up to five on one student I saw. The young man proudly told me that they were issued for good attendance and that he personally had taken no days off since he started school and that he was about to graduate. He said he loved what he was learning and wanted a lifetime career as an auto technician so he wasn’t about to miss any classes.

The school’s director had some fairly recent graduates address us about their current employment and what they believe they took with them as a result of attending such an intensive course designed specifically to get them ready to be technicians in the real world. Although they were all well spoken and impressive, most were youngsters just out of high school, beginning their first stint as employees, so many of them had nothing else with which they could compare their job experience, but all had one thing in common: They loved the opportunity to fix cars for a living. In fact, the only issue the school had with many of its students was the noise from the project cars some try to play with in the parking lot while classes are in session.

I was most impressed by two older graduates; these weren’t kids. One was a retired police sergeant in his late 40s who wanted the right start on his second career. This was a no-nonsense kind of guy who had always loved cars and tinkered with his own since he was old enough to drive. Any of us would be proud to have him as an employee. The other was an ex-marine who had completed three tours in Afghanistan. His wife, who is also in the corps, accompanied him. When he received his discharge he decided to work in a profession he had always enjoyed as a hobby, so he used his GI Bill money to help pay for his tuition. Now he is already up to a “B” technician status at a large dealership. It probably won’t be long before he goes all the way to the top.

I think what I enjoyed most was finding out that these students paid for their own education. It isn’t like a college or university where if you are a state resident you get to go for almost nothing. Most of these kids don’t have parents who can afford to foot the bill, either. They take out their own loans to pay for their education. What that translates to is that these kids are flat serious about their studies. They are there to learn their trade and know that their future living depends on how well they do now.

One thing that sets these trade schools apart from colleges is the practical application of the training. They don’t have four or five years to teach theory. They have 13 months to get these kids ready to go to work, so that’s what they do. They teach just enough theory so the kids understand how something works but then spend the bulk of their time teaching how to fix it and having the kids do it themselves so the teachers can evaluate whether the students can translate what they’ve learned to the movement of their hands and whether they can think their way through the varied technical problems.

Lincoln Tech is, of course, not the only school that can get a young person ready for a career as an auto technician; there are several throughout the U.S. and Canada. I featured that school because of its proximity to GNYADA and because I knew it in the past from training for CARQUEST at some of Lincoln Tech’s facilities and for recruiting its graduates for Lee Myles Transmissions.

The auto-repair industry is kind of like the prize fighter who keeps getting knocked down and pops back up for more. Every time technology makes a change that would indicate less of a need for what we do, the economy makes one that forces people to keep and fix what they have as opposed to replacing with new. Add to that the rate of obsolescence in the technology of the manufacturers and you have something new and quite different coming out every year or so. Although this technology is changing, thousands of new-car buyers each year have bought vehicles that have to be serviced properly if they are to live a normal lifespan; so even if the car they bought last year goes obsolete this year they still need it repaired and serviced for the next 10 years.

There’s our niche: We keep the obsolete technology alive for customers so that even though they are no longer driving the most-up-to-date vehicle they are also not forgotten. We know how to repair and service the cars they have, to ensure that they reach their projected useful life. That’s what these schools and training facilities are all about, getting the youth of North America ready to handle the different technologies of the past, present and future. If there is anything that’s lacking it’s that there just aren’t enough of them.

Advertisement
In this article:Its Your Business, Training