How Easy, or Hard, Is it to Service the Gen III Vehicle? - Transmission Digest 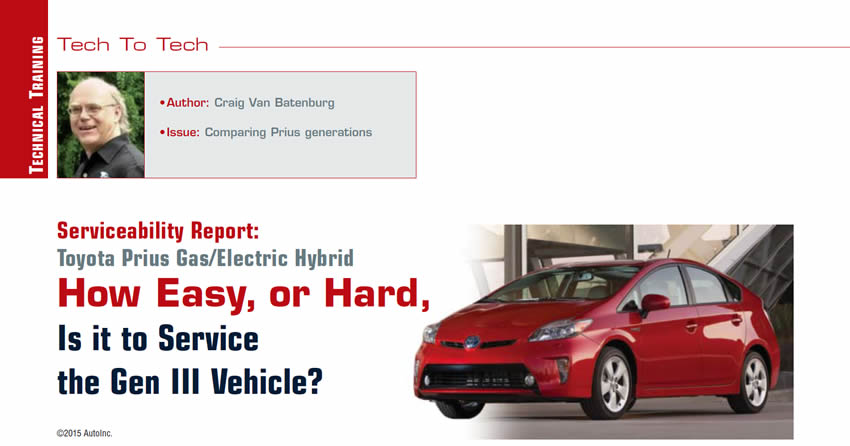 For more than 15 years, Prius has been known as the quintessential hybrid. Sales have been so strong that at one time there was a waiting list, and almost 50% of hybrids on the road were Prii (plural for Prius).

Comedians have joked about them, movie stars have wanted to be seen in them, and people who drove them thought themselves superior. And I’ve been at the center of it all from the very beginning.

The Prius family – Prius Hatchback, Prius C, Prius V and the Plug-in – is still wildly popular, and a new Prius is coming soon. So this issue, we’ll compare the second-generation Prius (2004-09) to the current, third-generation Prius (2010-15). The redesign changed a lot, technically, but did the car get easier or harder to service and repair?

If you’re new to this column, we look at car designs through a technician’s eyes. So far we’ve reviewed cars, trucks and SUVs from Japanese, American, Korean, English and German car companies. Now, we return to a Japanese automaker for a comparison of an older Prius to the newer model.

One glance under the hood of the Generation II Prius (2004-09), and it looks normal – if you have some hybrid training. Without that, it might seem a bit strange. It has precious little space, and you won’t see the 12-volt battery. Instead, look inside the hatch on the right corner, and you’ll find an absorbed glass mat (AGM) 12-volt unit.

The internal-combustion engine is a carryover from the previous model. Toyota has used a 1.5-liter engine with late intake valve closing (LIVC) since the beginning. Oil-change intervals are extended beyond what I would agree with, so continue to suggest more frequent oil changes to your hybrid customers. And be careful with the air filter; any issues with sealing or debris falling from it during service can cause a no-start if the mass air flow (MAF) sensor gets any foreign matter on the sense wire.

In general, you service hybrids much like conventional cars – unless you’re getting near an orange cable, a service plug or the high-voltage system. Otherwise, the rest of the car runs on 12 volts, with a few exceptions, and the techniques you’ve developed for service remain the same. If in doubt about hybrid safety, get trained before you get hurt. The Gen II Prius comes well documented and is easy to service in most cases.

The redesigned 2010-15 Prius is bigger, faster and lighter, and the fuel economy went up a few mpg in the process. But service is much the same as before, with a few notable exceptions.

All Toyota Prius vehicles now use smart-key technology. Cutting a new metal key is pricey, as is the replacement metal key. Also, the hot-water-tank system for keeping the cylinder head warm has been replaced with an exhaust pre-heater that directs the internal combustion engine’s coolant into a chamber wrapped around the exhaust to heat the engine quickly. A larger engine (1.8 liters) and a boost converter that raises the high-voltage system from 200 volts to 650 volts under hard acceleration helps the performance, while the EV and PWR mode buttons keep the engine off at low speed/low load. And PWR means power.

The Automotive Career Development Center’s (ACDC) Gen III Prius averages 50 mpg, city and highway, which is just what the Environmental Protection Agency (EPA) said it would. Designers replaced the single belt driving the water pump with a 12-volt brushless motor that does the job. With a chain driving the twin cams, this is truly a non-rubber-band system.

In almost every way, the Gen III Prius is a better car, but did Toyota make it easier to service than the Gen II? I would have to say yes – and no. The oil filter is a cartridge, so no problem there. The 2001-09 Prii have a rubber bladder in the gas tank and a sub-tank in the steel tank as well. If something goes wrong, you have to put in a new tank assembly. However, the Gen III has a replaceable pump and no bladder.

Toyota has moved in the right direction, using iridium spark plugs that retail for under 15 bucks each. And the positive crankcase ventilation (PCV) is, by design, behind a panel under the intake manifold. The EPA does not require a monitor, if the PCV is hard to get to, and Toyota did a great job of hiding it.

The brake-by-wire system has fewer parts that look easier to access and disc brakes on the rear instead of drums. I spoke with Prius experts Jamie and Roberta Wooldridge, owners of Hilltown Hybrids in Plainville, Mass. Jamie says that the Prii are “great cars, and my customers love them.” But Roberta notes, “The newer Prius will need more brake work than the older one. In some ways, the Gen II Prius was cheaper to own.” (Full disclosure: Jamie helped conduct classes for ACDC at “Up Your Voltage,” ACDC’s six-day hybrid class.)

Indeed, some parts cost more in the Gen III when compared with the Gen II, though some cost less. The hybrid system is very good and has few problems. Access is OK, but other cars rate better. Most techs I spoke with, if they’ve had a steady diet of Prii (all years), have a few, small complaints but none that make Toyota’s changes seem dumb.

Are hybrids more difficult to service than conventional cars? Most certainly yes, especially if you’re new to them. But the cars’ high-voltage parts can ruin your day if you don’t follow safety procedures. Has anyone stateside been electrocuted working on a hybrid? No, because these cars are safe in the hands of well-trained hybrid techsnicians. The National Institute for Automotive Service Excellence (ASE) offers a test, called the Light Duty Hybrid/Electric Vehicle Test (L3), for those who are ready to prove they’re trained on hybrid systems. And safety is part of ASE’s L3 testing.

For the most part, the new Prius equals the earlier models. ACDC owns all three generations of Prii: I, II and III, so we know the cars have improved in serviceability. But technicians still need to get more input into their designs to make them even better. Remember: It’s harder to fix them than it is to design them.

Craig Van Batenburg, AAM, is a master hybrid technician. He is owner of the Automotive Career Development Center (ACDC), which he founded in 1998. He develops technical classes for those who require updating their knowledge in hybrid and electric cars.