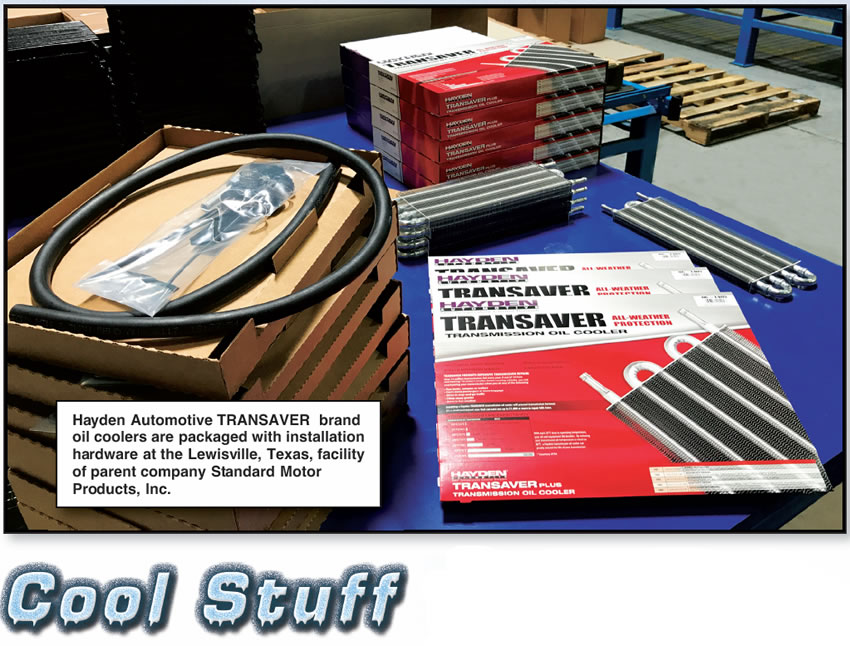 As for the transmission builder, Miller points out that the transmission being rebuilt has already failed under the conditions the vehicle owner puts the car through. It would only make sense that a heat failure should be addressed by decreasing the possibility of such future failures.

Ron Miller serves as marketing and product line manager for the Hayden brand, one of several brands comprising the business portfolio of Standard Motor Products Inc. (SMP). Miller says that they see millions of transmissions failing each year, and in nine out of 10 cases failure can be traced to overheating. Miller goes on to say that the need for auxiliary coolers is increasing due to a number of vehicle-design and driver-preference issues.

Hayden believes that in addition to towing, coolers will benefit vehicles driven in steep road conditions, in hot weather and in the type of stop-and-go traffic that characterizes so many morning and afternoon commutes.

As for the transmission builder, Miller points out that the transmission being rebuilt has already failed under the conditions the vehicle owner puts the car through. It would only make sense that a heat failure should be addressed by decreasing the possibility of such future failures.

“This cooler,” he says gesturing to a sample Hayden transmission cooler, “is a cost effective form of insurance that any shop can get. There are a lot of rebuilders who feel the same and put a cooler on with every rebuild job because for $30 or $50 the customer’s going to be happy and have a long-lasting transmission. It’s going to give the rebuilder confidence as well knowing that the unit, when installed, will be operating at the correct temperature.”

Transmission Digest met recently with the Hayden management team at their headquarters facility located just north of Dallas in Lewisville, Texas, where Miller gives a brief history of both the Hayden brand and the transmission cooler that he points out are one and the same.

“The transmission cooler was invented in 1961 by Perry Hayden. Perry had a Cadillac and he grew tired of his transmission burning up when pulling his camper through the mountains of California. He took an old-style condenser from a refrigerator.”

Engineering manager Archibald Pinto continues the story saying, “He took that coil to a company called Dunham-Bush and had them make a smaller version of it for use on his automobile. He tested it going up Cajon Pass. As his buddies and fellow campers learned about what he had done, they wanted one too and so the initial order was made for 50 units. This was the birth of the transmission cooler, not only for Hayden but for the entire automotive marketplace.”

Hayden’s company was acquired by Equion Financial and subsequently added to the SMP portfolio in 1996. In 2011 the company relocated from its original home in Corona, Calif., to the Dallas Metroplex. In addition to the Lewisville facility, the Hayden brand utilizes manufacturing facilities in nearby Grapevine, Texas, as well as an SMP plant in Mexico. Together those plants provide something in the neighborhood of 300,000 coolers the company sells annually.

‘Mechanical components are by their nature always inefficient,” says Pinto. “The inefficiency translates to heat. If you can’t dissipate the heat, then it will keep building and building to the point where failure occurs.”

Miller says the need for an auxiliary cooler has grown due to vehicle design changes brought on by the need to achieve every higher mileage targets. “Since 1961 there have been several waves of changes in the industry bringing us to the point where you have a compact engine base. The engine is crammed in a smaller space with electronics and more and more emission controls until it becomes so compact that the heat can build up. And you now have smaller radiators. Today there are these tiny plastic boxes that somehow are supposed to cool both the engine and the transmission. Even under so-called normal conditions it’s possible for the cooling to be insufficient. Today’s automobiles that don’t do a good job of cooling the engine are obviously burdened when attempting to cool transmission fluid coming from a torque converter that acts like an oven, producing heat.”

Pinto continues, “Smaller cars have smaller grills so there is less air coming through the heat exchangers. Typically there is no more than the bare minimum amount of air coming in to help cool the engine and transmission. It is a challenge trying to get enough real estate up in front of the radiator. So the radiator and cooler need to be in the place where the ram air is greatest.”

“We’ve had installers tell us there isn’t any real estate available for the addition of a cooler in, for instance, a Ram diesel pickup truck,” Miller says. “But the vehicle needs one. The technicians told us of a procedure that takes a notch out of the bottom of the front bumper in order to fit a cooler of sufficient size to those trucks. To properly cool one of those that’s towing or plowing or whatever requires airflow greater than what is provided by the OEM design of the grill.”

According to the product team, Hayden also addresses the need to get maximum cooling packed into a minimum of space by using several patented technologies developed to move heat from the fluid to the air. More efficient ‘plate/fin’ coolers offered in the product line improve upon the original, ‘tube/fin’ cooler design.

Miller says the current flagship design is a line of by-pass coolers that, based on fluid pressure, allow the cooler to be bypassed at lower temperatures and yet be there to increase cooling once needed. “Our patented design,” he says, “eliminates the need for external valves that require additional plumbing that can clog or stick in the case of fluid contamination from debris. Our design increases fuel economy and reduces friction of internal components by reducing the time required to reach proper operating temperature.”

Product Manager Donald Harrison adds, “We always recommend putting the Hayden cooler in series after the OEM cooler. This is the most efficient way to get maximum cooling from the combination of both coolers.”

Pinto says that one of the most important keys to generating efficient cooling in the heat exchangers is that turbulence is introduced to the fluid flow by incorporating patented dimpled fluid channels throughout the cooler assembly. Turbulence in the fluid flow allows more heat to be transferred from the fluid and resulting in more heat capacity and cooler operating temperatures inside the entire transmission and torque-converter system.

Miller says the brand mission at Hayden includes a variety of other cooling products, notably engine oil coolers, electric fans and fan controls and a number of accessory items. He adds that Hayden is the largest aftermarket manufacturer of fan clutches in the U.S.

“Our featured fan controller is a pulse width modulated, soft-start digital fan controller that allows the installer to program the temperature at which the fan will activate to help cool the transmission. Soft start means that there is minimal wear put on the brushes of the fan motor. At that point the fan will come on and continue to operate until the temperature of the fluid falls below the programmed threshold. The fan then will slowly ramp down and eventually shut off. There was an attempt by another company some years ago to do this but its cost was nearly $300 and there wasn’t a market there. We’ve been able to achieve the same functionality for around $80, which seems to be a price the aftermarket is willing to embrace,” Miller explains.

And, with the expanding market for diesel pickups and other customized vehicles, the company is seeing a growth in demand for power-steering coolers too. “We manufacture power-steering coolers to cool down steering systems that are challenged by the larger tires and wheels being used. In 2007 you could have five different factory wheel-size options (17-22”) on a Chevy pickup truck. The larger sizes generate more heat without any compensation for the additional heat generated using virtually the same power steering system from the factory.”

“The Hayden Power Steering Coolers are available for everything from a compact car up to a class A motorhome. Just as with the transmission, if the temperature goes too high, then the fluid loses its properties and the system will eventually fail, causing damage to the power-steering pump.”

The team believes that the most important of competitive advantages for the Hayden brand is its aftermarket pedigree. While they recognize that the company has a long history of supplying OEMs, they point out that the birth of the product line was in the aftermarket and they remain committed to serving that segment well.

They say with pride that when a customer calls Hayden for answers, there’s somebody there to pick up the phone. “We support installers in a variety of ways,” continues Miller. “We have point-of-purchase materials that installers can request that will help a retail shop sell the job to his customer. We have posters and we even have point-of-purchase racks for coolers that visually display the different options available when that customer adds a cooler.

“Our website includes a library of general installation tips, and we also train thousands of technicians each year at our Irving training center or on location in support for a distributor of our products.”

As our conversation comes to an end, Miller says, “I just don’t think we can emphasize enough the importance these products play in creating the confidence installers need to stand behind their work with a meaningful warranty. And, I can’t say it any better than I said it before, ‘Adding a cooler to a transmission job is the most cost effective insurance that any shop can get!’”