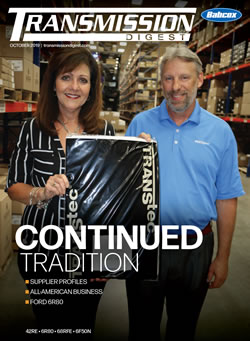 On the Cover
CONTINUED TRADITION
Transmission Digest visits Freudenburg-NOK’s Trans Tec plant in Milan, Ohio, and discusses the future of transmissions and the company.

Before Transmission Digest arrived for a visit with the people at Freudenberg-NOK’s plant in Milan, Ohio, the commercial and marketing teams took time to go back through the history of articles appearing in the magazine. Marketing Manager Andrew Ciszczon had a copy with a few passages circled. “I thought it was really interesting to read through this 1982 story about our company in Transmission Digest,” he said. “We used words like ‘quality’ and ‘service’ and all the kinds of things that are still descriptive. None of that has changed here. Maybe how we deliver those objectives has changed as the quality that we oversee has become more sophisticated.

“We work to make sure that the industry can easily and quickly understand which is the right TransTec® kit for every job and then we assure the builder that every one of those kits has the right parts inside the bag, so they can rebuild it right. “

The Milan facility located just west of Cleveland is the company’s global lead center producing TransTec brand kits for the transmission and the power steering aftermarket segments. This plant and a handful of other North American sites were originally owned by International Packaging Corporation until the German-Japanese joint venture of Freudenberg-NOK acquired all IPC assets in 1989.

To clear some of the confusion with all those names, Sales and Brand Manager Patty Richards told us, “The North American aftermarket brand TransTec is targeted on rebuilders who want the quality and engineered solutions that come from improved or updated components found in the TransTec line. Don Cottrell, the company’s Technical Services Manager added, “understanding the evolving OEM technology and design, while capturing the perspective of the rebuilder, allows us to create solutions to expected challenges in the aftermarket. Knowing the rebuilder’s needs, we can help them identify failures and serviceability roadblocks. We address those concerns through redesigned parts and rebuilder support in the form of tools, literature and videos.”

Richards added, “Those advances require us to employ completely different development methods today as opposed to what we did 15-20 years ago. It used to be a process where we looked through the OEM microfilm and maybe purchased an OE service kit to figure out what went into a transmission. Today, we have a full product development lab where we break down cores in order to identify, catalog and assemble the most complete bill-of-materials in the industry well before the OE service kit is available.”

Director of Product Development Chris Petronella said, “looking at the entire portfolio, including kits developed years ago, I’d say that about 70% of the components in the overhaul kits are acquired from OE sources. However, if we consider what we’re working on now, the late-model applications, there is a greater need for us to do the development of an aftermarket component than was the case historically.

“As OEMs continue to restrict access to their parts, the advantage that we have with the TransTec line is that being part of Freudenberg-NOK, we’re often the manufacturer of the OEM component making it less of a problem for us. In the instances where we are not the OEM, our development process is a ground-up effort. We use Freudenberg-NOK’s proven design and material standards to ensure our products perform at OE quality levels. That’s true whether it’s an axle seal or a manual shift lever seal.”

“When we need to develop products to be manufactured outside the Freudenberg family, plastic parts for instance, we have established third-party manufacturers that we use. These business partners have experience and expertise in working with those materials. In such cases we design the product and specify the materials used.”

“With respect to kit content, I view quality in three different ways,” added Commercial Director Corinne Ross. “First, we have outstanding processes that we’ve enhanced over the past 40 years. For instance, the process of product development that entails disassembling a transmission to fully learn about that application. This enables us to know exactly what parts are inside and, ultimately, know what a technician would need to rebuild that unit. That’s the cornerstone. We measure and analyze each step. It’s a quality approach.

“Secondly, for our production kitting operations we have processes that we’ve developed and enhanced in a similar fashion. We treat our kitting operations as if this were manufacturing, with quality touchpoints that assure everything is correct as it flows in and back out to our customer. Some examples are vision measurement systems at receiving, visual part verification when we pick product and sensing technology to ensure all components are in the kit.

“Finally, the quality of the part itself originates from being part of an outstanding manufacturing organization, Freudenberg-NOK. The entire organization, including our facility, has had a long history of continuous improvement programs. From NOK, we’ve adopted many Japanese-based lean manufacturing approaches that have been applied throughout much of the 41-year history of the TransTec brand.

“Another factor we should consider is the tremendous amount that our parent company invests in Research & Development. By our participation with those efforts, we often see new technologies and materials long before they are adopted for use in a transmission.”

Cottrell said that the introduction of new transmissions has increased sharply in recent years as has the number of kits needed to address more OEM variants than ever before.

Richards added, “We historically tear down one unit, sometimes two units if there are a couple of versions. But we needed to take apart six separate units in order to account for all the variations in the Aisin eight-speed. Through research we determined there are two different variations requiring multiple overhaul kits.”

“Yes,” Petronella agreed. “According to IHS Markit data there are an average of 14 new transmission programs released annually by the OEMs. Those are truly new transmissions as opposed to a variant of an existing one. That’s substantially higher than just 10 years ago. In order for us to keep pace with these technology changes, we have to produce a similar level of output in kits.

Ross explained, “That’s data that we use in our process-driven approach. We monitor what transmissions are going into vehicles through data provided by the vehicle manufacturers. Also included are forecasts, currently out to 2026, that allow us to know the planned production of every make and model combination world-wide including the specific engine and transmission that will be used. It doesn’t tell us everything about the multiple version units, but it does give us a good idea of what’s coming.

Petronella said that the current strategy for product development is one of being first to market. “Over the past five or six years we’ve attempted to release our kits to the market sooner than we had historically. There are cases in which we’re releasing a kit a year after the transmission first went into production. In such cases we’re aware that in the independent aftermarket these units aren’t going to be repaired yet, but we would rather have that product available to the aftermarket before there’s an absolute need.”

Concluding, Ciszczon observed, “Our goal is the same today as when you wrote about us in 1982: to provide the highest quality to be found in the entire aftermarket.” TD

“Many people in the aftermarket have seen a recent series of videos produced with stunt driver and semi-truck racer Mike Ryan,” said Freudenberg-NOK’s Chris Petronella. “I started with the company as a product technician for the TransTec power steering product line. Part of that job is fielding technical inquiry calls that come in either directly or through customer service. I answered one of those calls one day and this guy says he’s Mike Ryan and he’s having steering issues. I wasn’t aware of who Mike Ryan was, but he told me he raced a semi-truck up Pike’s Peak. That day we sent him a couple of steering kits to help him out.

“Being curious, after we got off the phone, I Googled Mike Ryan and found out he wasn’t just a guy who races up Pike’s Peak, he’s the holder of multiple records in that particular class of semi racers. Racing is his hobby. His job is being a stunt driver and stunt coordinator in Hollywood. His work is seen in Terminator 2 and all of the Fast and Furious Movies.

“After our initial phone conversation, he stayed periodically in contact with us. Eventually, we made a video with him that led to an entire campaign of promotional videos created to raise brand awareness, not only for TransTec, but another brand we’ve introduced to the North American aftermarket, Corteco. The TransTec brand is known for delivering quality, service and engineered solutions to rebuilders through its application knowledge and sealing expertise. The Corteco brand provides the same quality and service with Freudenberg and NOK sealing, vibration control and cabin air filtration spare parts to the independent aftermarket, primarily servicing European and Asian vehicles.”