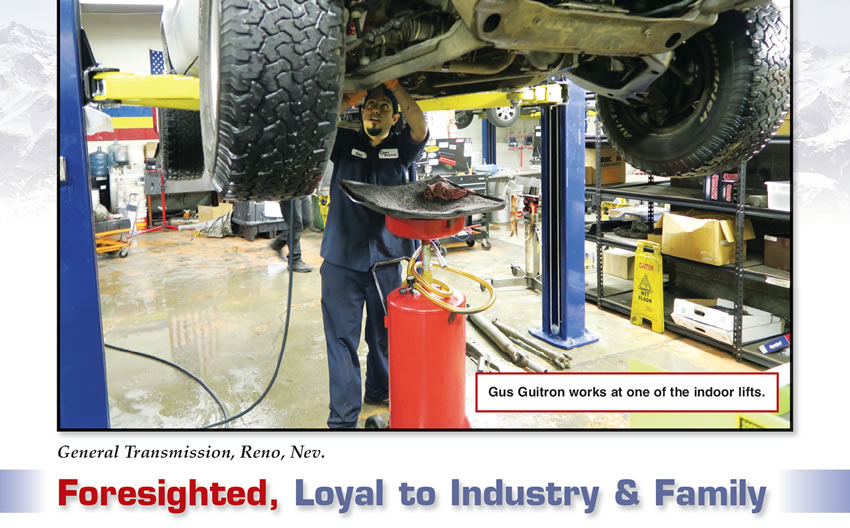 Pete Attashian strives to elevate his transmission shop to “new-generation” status, expanding his reach, cultivating the best employees, making the most of current marketing and research techniques.

Pete Attashian strives to elevate his transmission shop to “new-generation” status, expanding his reach, cultivating the best employees, making the most of current marketing and research techniques.

His father, Vasken Attashian, founded the business in 1994, setting a tone of honesty and service. Pete began working in the shop in 2012, at age 25, and Vasken has retired.

“My business plan isn’t built for Reno; it’s for northern Nevada and parts of California. I’m more focusing on the rural parts of Nevada,” Pete said, mentioning mining areas and tourism places like Lake Tahoe. “In rural areas, they don’t have many choices.”

A One more way to grow the business involves not competing with other transmission shops.

“We want to stay loyal to our industry, which is transmission and powertrain repair.”

He subscribes to the tried-and-true motto of the industry: Going to an auto-repair shop for a transmission rebuild is like going to your general doctor for heart surgery.

Pete said General Transmission stands out in several important ways.
People: “We have certified technicians. All we do is train and development them. They’re constantly learning, providing them with the best tools – and growing. I feel we have the best team in the business or close to it.”

Service: A manager and a service adviser are well skilled to communicate with customers. “You want to listen to the customer to understand their needs. We try to understand if they’re coming from a price or quality basis.”

Marketing: He engages a consulting firm to stay competitive. “Every month we go over opportunities and growth, and it’s actually pretty exciting.” In addition to advertising, the website is a portal for a great deal of business. He updates the site annually.

Vasken Attashian, an Armenian from Syria, immigrated to the United States and worked his way from east to west, settling in Reno. For roughly 10 years, he had an autobody shop in a complex with other businesses. Then he had an opportunity to buy the transmission shop in the complex.

“My dad came into it knowing nothing about transmissions. He just jumped into it,” Pete said. “He was promised a couple of employees but received nothing. No employees to start. No knowledge of transmissions, no experience, no nothing – and he made it work. And he did really well with it.”

Vasken put his son and daughter through college by way of his reputation for integrity and quality.

“Throughout the years, always the biggest thing for him was being honest and being a man of his word. That’s what my dad was known for,” Pete said. “That’s the culture that we have. He stands behind his work – whatever it takes, giving 110%.” If anything went wrong, it was fixed immediately.

Alongside his devotion to customer service, Vasken had a candid demeanor.
“My dad was pretty simple in his approach. He was a straight shooter. He wouldn’t beat around the bush,” Pete said. “He told you exactly how it is, and what it’s gonna be. … The biggest thing he wanted to protect was his name and his reputation. That was the most important thing. No dollar amount can replace that.”

Pete rebuilt his first transmission at age 12 and helped out in the shop as a youngster. After he earned a bachelor’s degree in business at the University of Nevada, Reno, he took a job at a well known car-rental company, working in management in Los Angeles-area offices. At he immersed himself in “development shops” that the company provides for those who want to excel.

“I probably learned the most from a lot of people, a lot of cultures, a lot of everything. Being a manager on top of that, I learned how to motivate my people, talk to them, and get them on the right track for success,” he said.

As the father’s treatment took longer than expected, the son decided not to go back to the car-rental business, and to stay at the shop. Since then, he took the helm and presided over the continued progress of the business.

In March, Pete and his wife Marina had their first child, a girl Alice. “My thought process has changed … It’s not about me. It’s about looking out for her, making sure her future is protected. It makes your life more complete and more motivated.”

Pete aims to acquire the entire space in the complex, which Vasken owns. One of the three tenants is expected to leave this year, another one next year, he said. The additional space will enable Pete to install a couple of lifts and create more area for work: “not necessarily more people but using my space more productively,” Pete said.

He wants to continue to grow, keep training and developing the staff, and always be prepared to address new trends in the market.
“My goal is to expand at a healthy rate, nothing crazy where you’re sacrificing service.”