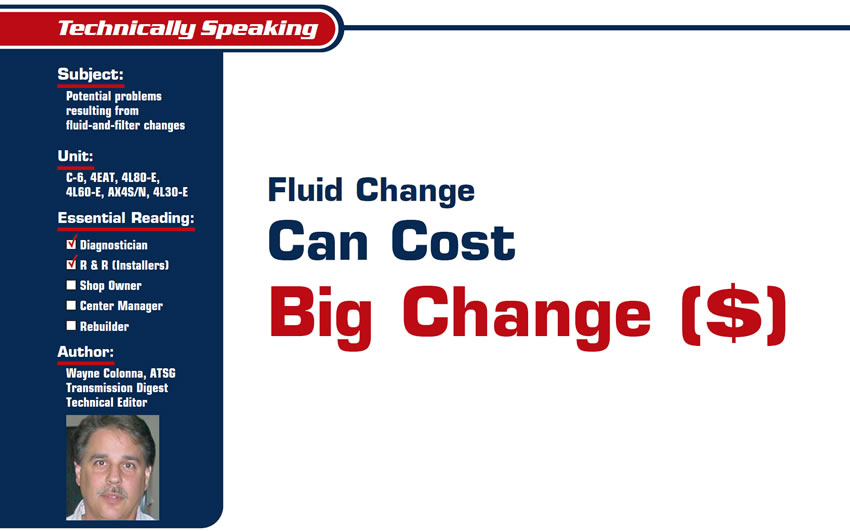 Some of us may remember how in the days of old a C-6 transmission would leave a beautiful filter footprint in the bottom pan. This resulted from the filter opening being too close to the pan. When the pump started sucking, it would pull the pan right up to the filter, and as it vibrated away the filter etched itself into the pan. Of course, that starved the pump and caused premature failure of the transmission.

Some of us may remember how in the days of old a C-6 transmission would leave a beautiful filter footprint in the bottom pan. This resulted from the filter opening being too close to the pan. When the pump started sucking, it would pull the pan right up to the filter, and as it vibrated away the filter etched itself into the pan. Of course, that starved the pump and caused premature failure of the transmission.

Sometimes this already-bad scenario would be aggravated by an R&R technician’s use of a block of wood between the transmission jack and the pan to lift the transmission high enough to install the cross member. This would push the pan right into the filter.

We have seen a similar method used with the 4EAT one- and two-pan units used in Ford and Mazda vehicles. If they didn’t use a block of wood they used the jack itself by closing in the four holding fingers and pushing up on the pan in this manner. Sometimes you can even see dents left in the pan by the four fingers.

Obviously, a procedure like this causes unnecessary and premature failure of the transmission. And it could be a mystery problem for some shops, leaving them wondering why the pump is destroyed or the clutches burnt. This can be a bit more elusive if the shop has one R&R man who doesn’t use this method of installation but another does. So only some units come back.

One other area that can cost you, if you are not careful, is a simple fluid-and-filter change. How easy it is to use an incorrect filter in a 4L80-E. In the 1997 model year, the pan was made deeper and the filter inlet was extended deeper into the pan. This filter has three dimples built into the outside casing and a stand-off by the suction hole. These dimples hold the filter up into the pump, preventing the filter from falling out of the pump, and the stand-off keeps the filter from sucking the pan up.

You must take care when replacing the fluid and filter in 4L60-E transmissions in four-wheel-drive S10 Blazers. As you sneak the pan off to do a fluid-and-filter change, or when you put the pan back after replacing the filter, it is very easy to unknowingly damage the shift solenoids. You fill the unit and start the vehicle, and it immediately goes into failsafe with solenoid codes. Now the shop has to drop the pan again and replace the solenoids.

Another filter mismatch that frequently occurs involves both the AX4S and AX4N transmissions, in which the filter seal needs to match the type of pan and pan gasket being used. This can cause pump cavitation or falling out of gear during turns. Eventually, it leads to unnecessary and premature failure of the transmission.

The most-costly scenario we have run into involves the 4L30-E, which has been on the road since 1990. The internal solenoid wiring harness has a conduit made of plastic that hardens over time from heat (see Figure 1).

When you replace the filter, you can push it up into the harness, causing the conduit to break up into sections (see Figure 2).

This can expose a wiring splice in the harness, shorting it to ground on a valve-body bolt (see figures 3, 4 and 5).

In 1990-93 models, this causes the computer to initiate failsafe and report solenoid circuit codes that it didn’t have before the fluid-and-filter work was performed. This may cause you to spend unnecessary time and money replacing the solenoids, which does not ultimately repair the problem.

And as costly as this simple job has become, it is not as costly as what can happen with 1994 and later vehicles. For 1990-93 vehicles, this splice is the common ground for the solenoids, and the TCM energizes the solenoids on the power side.

In the 1994 model year GM changed the TCM so that this splice is the common power for the solenoids and the TCM energizes the solenoids on the ground side. So if this splice gets shorted to ground during a fluid-and-filter change, as soon as you turn on the ignition, this power wire’s direct short to ground immediately destroys the TCM. This is a very expensive fluid-and-filter change for the shop.

Now it’s time to fill the transmission with fluid. With regard to rear-wheel-drive vehicles, it may be a good idea to locate the full mark on the dipstick. We have seen use of incorrect or mismarked dipsticks on which the full mark is too low. It must be near or slightly above the level of the pan gasket. Sumps that run slightly low during highway cruises will cause mysterious clutch failure. Have you ever dropped the pan on a 4L60-E transmission that was not leaking, yet the pan was halfway down before any fluid came out? Have you seen 3-4 clutches burnt for no apparent reason?

Every aspect of transmission work requires skill, observation and common sense, even with something as simple as a fluid-and-filter change.

Otherwise, it could turn into a costly experience – and we haven’t even approached the subject of which fluid to use. Did I just open a can of worms?

Many thanks to Gary Carne from Freeway Transmissions, who gave me this tip on dipsticks with fluid-level discrepancies, and to Ed Lee, whose suggestions enhanced the article content.