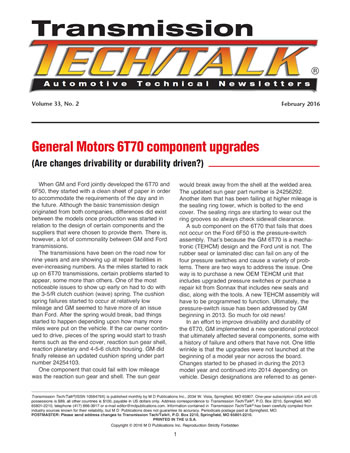 When GM and Ford jointly developed the 6T70 and 6F50, they started with a clean sheet of paper in order to accommodate the requirements of the day and in the future. Although the basic transmission design originated from both companies, differences did exist between the models once production was started in relation to the design of certain components and the suppliers that were chosen to provide them. There is, however, a lot of commonality between GM and Ford transmissions.

The transmissions have been on the road now for nine years and are showing up at repair facilities in ever-increasing numbers. As the miles started to rack up on 6T70 transmissions, certain problems started to appear, some more than others. One of the most noticeable issues to show up early on had to do with the 3-5/R clutch cushion (wave) spring. The cushion spring failures started to occur at relatively low mileage and GM seemed to have more of an issue than Ford. After the spring would break, bad things started to happen depending upon how many more miles were put on the vehicle. If the car owner continued to drive, pieces of the spring would start to trash items such as the end cover, reaction sun gear shell, reaction planetary and 4-5-6 clutch housing. GM did finally release an updated cushion spring under part number 24254103.

One component that could fail with low mileage was the reaction sun gear and shell. The sun gear would break away from the shell at the welded area. The updated sun gear part number is 24256292. Another item that has been failing at higher mileage is the sealing ring tower, which is bolted to the end cover. The sealing rings are starting to wear out the ring grooves so always check sidewall clearance.

A sub component on the 6T70 that fails that does not occur on the Ford 6F50 is the pressure-switch assembly. Thatʼs because the GM 6T70 is a mechatronic (TEHCM) design and the Ford unit is not. The rubber seal or laminated disc can fail on any of the four pressure switches and cause a variety of problems. There are two ways to address the issue. One way is to purchase a new OEM TEHCM unit that includes upgraded pressure switches or purchase a repair kit from Sonnax that includes new seals and disc, along with the tools. A new TEHCM assembly will have to be programmed to function. Ultimately, the pressure-switch issue has been addressed by GM beginning in 2013. So much for old news!

In an effort to improve drivability and durability of the 6T70, GM implemented a new operational protocol that ultimately affected several components, some with a history of failure and others that have not. One little wrinkle is that the upgrades were not launched at the beginning of a model year nor across the board. Changes started to be phased in during the 2013 model year and continued into 2014 depending on vehicle. Design designations are referred to as generation 1 (GEN 1) and generation 2 (GEN 2) which can be identified by the transmission RPO code. The codes are as follows:

The new operation strategy is referred to by GM as clutch pulse learn (CPL), which enables the TCM to modify shift characteristics based upon conditions. At times, the computer will start to apply a friction element looking for a change in rpm in order to gauge the fill rate and adjust accordingly. This process occurs occasionally and is done in third, fifth and sixth gear. For the most part generation 1 and generation 2 components will not interchange.

An adjacent component to the TEHCM is the seal that goes between the unit and the valve-body cover. Even before the GEN 2 launch, this large bathtub type seal was changed (Figure 2). The early design was a larger diameter with orange rubber and the later designed has a smaller diameter with black rubber. GM now shows the later design as being 2007-up. Make sure to install either design with the mold holes facing the TEHCM.

Valve bodies are changed for a variety of reasons, some big and some small; however, the 6T70 valve body was primarily changed to accommodate the CPL strategy and the changes were substantial.

Three of the items changed are actually kit components that include the valve-body cover, upper and lower separator plates (Figure3A).

As with other newer transmission separator plates, the gaskets are bonded to the metal plates and can be a chore to remove. Whether building a GEN 1 or GEN 2 unit, the correct components must be installed. The plates in Figure 3A are GEN 1 and the areas for identification are circled. The cover plate contains a heatsink for the TCM and the plate is now redesigned to accommodate a seal around the heatsink for GEN 2 (Figure 3B).

The oil holes in all three valve-body plates are completely different. The upper and lower separator plates will have an identification mark in the corner. GEN 1 separate plates may be unmarked or have the letter “U” stamped in; whereas, GEN 2 plates may be stamped with a “V” or double “VV”.

In addition to the plates, many of the valves in the valve body have been modified and are not interchangeable. Beyond the valves are other changes such as check balls, increasing from 9 to 10 and the small solenoid accumulator valves and Springs. GEN 1 contains three and GEN 2 now contains six.

Another big part of the GEN 2 equation has to do with the friction packs, but not just friction plates. For instance, the piston for the 1-2-3-4 clutch assembly was changed in height to accommodate other changes within the pack (Figure 4). The difference in height is very slight and the new piston can be identified by cutouts in the return-spring notches. The piston part number for GEN 1 is 24245161 and for the GEN 2 piston is 24258508.

A weak area of the 6T70 has involved the cushion (wave) springs, whether due to breakage or fatigue. Generation 2 transmissions were launched with all new springs. The best way to differentiate between GEN 1 and GEN 2 is by the teeth. The GEN 2 teeth contain notches (Figure 5).

The remaining item that changed within the clutch pack is the friction plate. Normally, a change to a clutch plate would involve the material, but thatʼs not the case with the GEN 2 6T70. The friction plate has a slight wave in it to aid with apply and release. The GEN 2 plate has just a bit more wave than previous models and can be identified by notches in the teeth (Figure 6). In addition, there is a black ink stripe in the friction material and the plate has a smaller outside diameter. The GEN 1 part number is 24238272 and the GEN 2 part number is 24258506, although GM only offers it in a kit.

Similar steps were taken with the 2-6 stationary brake relating to the cushion spring and friction plates. The 2-6 cushion spring is the same thickness between GEN 1 and GEN 2 and the new spring can be identified by notches in the teeth as well (Figure 7). The difference is with the amount of waves, the first design having 7 and the second design having 9. The GEN 1 part number is 24259816 and the GEN 2 number is 24258501.

The changes in the 2-6 friction plates are similar to the 1-2-3-4 friction plates. The GEN 2 frictions can be identified by notches in the teeth and a black ink stripe in the material (Figure 8). The amount of wave was also increased in the new design. The first design part number is 24238273 and the second design number is 24258500. Second design plates are also available in GM kits, but not bulk.

The friction material on the L/R clutch plate is the only tan one in the bunch regardless of the year or model. Design changes were implemented in the same manner as the other clutch plates and can be identified the same way, by the teeth (Figure 10).

There is also a black ink stripe in the material and the design differences have to do with the number and height of the waves. The GEN 1 friction part number is 24223700 and the GEN 2 number is 24258499.

Lastly is the L/R clutch snap ring. The thickness of the snap ring was increased from 0.080 to 0.100 inches and it can be identified by the cut at the gap of the ring (Figure 11). In addition, the snap-ring groove in the case was also modified.

The 6T70 rotating clutch assembly has a dual purpose and has also been the source of many of the transmission failures. The drum contains components for the 3-5/R and 4-5-6 clutch packs as well as the input shaft, which is pressed in. To accommodate GEN 2 strategy, the drum was modified in several ways. At first glance, the drums look the same (Figure 12A).

To start with, the center hub of the drum has additional oil holes for increased balance oil flow (Figure 12B). To increase flow to the 3-5/R piston for release, additional holes extend to the outside diameter of the drum.

Beyond that change, the drum groove for the 3-5/R backing plate snap ring was modified (Figure 12C).

To increase flow to the 3-5/R piston for release, additional holes extend to the outside diameter of the drum. Beyond that change, the drum groove for the 3-5/R backing plate snap ring was modified (Figure 12C).

The bore of the input shaft was modified as well, in order to provide both clutch pistons with the required amount of balance oil flow needed for GEN 2 operation (Figure 12D). Not only does a single source of balance oil affect both the 3-5/R and 4-5-6 pistons during release mode, the same balance oil keeps the 3-5/R piston apply side charged to eliminate air in the system. Part numbers are now etched into the housing to help with identification. The GEN 1 part number is 24223798 and the GEN 2 number is 24260036.

The GEN 2 friction plate underwent the same type of facelift as the other frictions in regard to the waviness of the plate, which is almost double that of previous designs. The teeth also have notches for identification (Figure 14). The GEN 1 friction part number is 24238954 and the GEN 2 part number is 24264338.

To accommodate the redesigned groove in the 4-5-6 clutch drum, the 3-5/R backing plate snap ring was upgraded by increasing the wall thickness by 0.005-inch. Snap-ring design can be identified by the notch at the ring gap (Figure 15). The first-design snap ring number is 24263706 and the new ring number is 24264164.

The 4-5-6 friction plate is the only clutch that did not change for generation 2 models. There also is no cushion spring to deal with, which is a plus. What did change was the apply piston. More holes were added to the piston to channel the increased balance oil (Figure 16). The GEN 1 piston part number is 24223814 and the new design piston number is 24259953.

The 4-5-6 piston return spring was also redesigned by getting larger diameter springs (Figure 17). Unlike the previous design spring, the new design cannot be flipped upside down.

Over the years, the transmission end cover has been a victim of the 3-5/R cushion spring failure as well as needing to be replaced due to sealing-ring groove wear. A new cover was also released for GEN 2 applications, but with very little change. The main reason for the new cover is a redesigned compensator limit spring (Figure 18). The compensator spring in GEN 1 end covers is plain, whereas the new compensator spring is red in color and can be seen through the opening in the cover.

When rebuilding a 2013 or 2014 6T70 transmission, verify which design level it is before ordering parts or performing diagnostics in order to avoid issues.