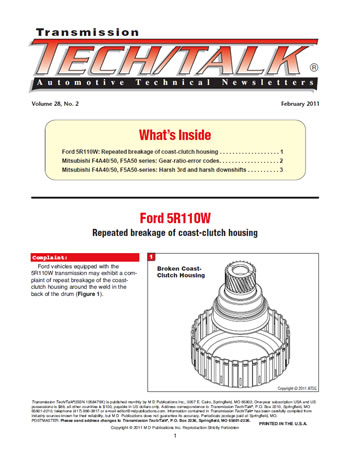 Ford vehicles equipped with the 5R110W transmission may exhibit a complaint of repeat breakage of the coast-clutch housing around the weld in the back of the drum (Figure 1).

The cause may be that the weld in the drum is not strong enough for the type of use the vehicle is experiencing, or the pressure-regulator valve is hung up, causing low pressure; when pressure finally builds high enough for engagement it could be explained like a “neutral drop,” which could snap the sun-gear section of the drum away from the stamped-steel section.

To correct this condition, refer to Figure 2 for an exploded view of the coast clutch housing.

Refer to Figure 3 and re-enforce the weld in the area shown.

Note: A new drum may come back with the same issue, as this weld area has not changed.

Also, while the transmission is out re-check the pressure-regulator valve (Figure 4) to make sure that it is not hanging.

The final-drive components and/or the planetary gear sets have an incorrect tooth count. When the PCM/TCM checks the gearbox rotating speed and does not see the target values, one of the codes mentioned will be stored.

If any final-drive component or planetary gear set requires replacement, count the teeth on the original part and replace it exactly. If this is an original complaint, then the transmission may have been worked on before and a planetary set with an incorrect tooth count installed at that time.

The transaxle codes are on the side of the case (Figure 5).

Use the charts in figures 6, 7 and 8 to determine which transaxle and drive components are correct.

After overhaul, some 2004-and-up Mitsubishi vehicles equipped with the F4A40/50-series or F5A50-series transaxles may exhibit a harsh upshift into third gear and/or harsh downshifts as if the transmission re-learn process has not been performed, even after extensive road tests.

The cause may be that A/T learned value was not reset with a scan tool. Note: Previous vehicles, 2003 and earlier, were capable of resetting themselves with a road test consisting of 25 to 30 upshift cycles, with a small number of full-throttle downshifts at the end of the road test. Some 2004-and-up Mitsubishi transmission control modules have revised internal memory that will not allow a reset by disconnecting the battery. This prevents an A/T learned-value reset without the use of a capable scan tool.

Using a capable scan tool or Mitsubishi MUT lll/STV software, place the selector in Park and connect the scan tool to the OBD-II connector, and refer to steps 1-4 in Figure 9 to reset the A/T learned value. This will reset all the clutch-pack adaptives so the TCM can modulate the solenoids for smoother applications.