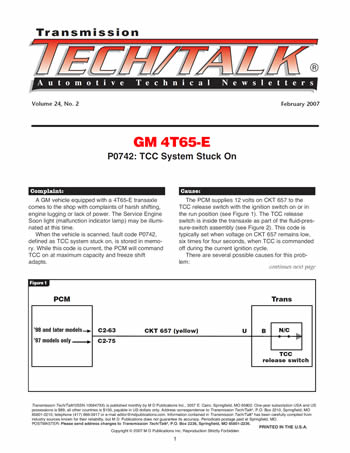 A GM vehicle equipped with a 4T65-E transaxle comes to the shop with complaints of harsh shifting, engine lugging or lack of power. The Service Engine Soon light (malfunction indicator lamp) may be illuminated at this time.

When the vehicle is scanned, fault code P0742, defined as TCC system stuck on, is stored in memory. While this code is current, the PCM will command TCC on at maximum capacity and freeze shift adapts.

The PCM supplies 12 volts on CKT 657 to the TCC release switch with the ignition switch on or in the run position (see Figure 1).

The TCC release switch is inside the transaxle as part of the fluid-pressure-switch assembly (see Figure 2).

This code is typically set when voltage on CKT 657 remains low, six times for four seconds, when TCC is commanded off during the current ignition cycle.

There are several possible causes for this problem:

At the time of this printing, the current OEM part numbers are:

Identify the correct TCC/PWM solenoid for your application (see figures 4 and 5).

It is easy to use the wrong solenoid, as both solenoids have gray plastic connectors with the same configuration and appear to be identical. They are not. Both solenoids will have two groups of four numbers etched on the can surrounding the solenoid winding. The first group indicates the Julian build date and the second group is the last four digits of the part number. Refer to GM TSB 02-07-30-039A dated Dec/2002.

At the time of this printing, the correct OEM part numbers are:

If you see battery voltage at this time, proceed with Scenario 1.

If you do not see battery voltage at this time, proceed with Scenario 2.

(Scenario 1) If you see battery voltage:

Turn the key off. Plug in transmission-harness connector and then turn the key on again. Recheck voltage on wire at terminal U from wire-entry side of connector. You should not see any voltage.

This switch is normally closed to ground without oil pressure present. With the engine running in Park or Neutral, TCC release oil acting on the switch should open the contact.

(Scenario 2) If you do not see battery voltage:

Recheck voltage on the piece of cut wire that is protruding from the PCM connector (See figure 6).

If battery voltage is now present, then trace and repair short to ground in wire between PCM connector and trans connector terminal U. Or, run a new wire to the transmission-harness connector in place of the existing wire. Cut the old wire out of the harness at both ends and tape it back. Be sure to solder and shrink-wrap the new wire and tape it into the existing harness for neatness. This is usually a yellow wire from the PCM to the trans harness connector.

If no voltage is present on the cut wire at the PCM connector, then the PCM will require replacement, as the circuit would be shorted to ground inside the PCM.

Electrically, this code can be set only by a short to ground on CKT 657. An intermittent or constant break or open in this circuit will not set code P0742.

If all external electrical checks test good at this time, then unplug the harness connector at the transmission. Start the engine, step firmly on the brake pedal and place the shift lever in overdrive. If the engine stalls out or if it feels as if the converter clutch is dragging, then replace the TCC/PWM solenoid. It is stuck right now (see figures 4 and 5 for correct solenoid usage and identification information).

It does not necessarily mean that the solenoid is good if the engine does not stall out or drag at this time.

Valve-body concerns such as a sticking TCC control valve may cause the vehicle to stall in Drive-range 1st gear or in Reverse. The TCC regulator apply valve can cause a surge or harsh TCC engagement. Problems with the torque-signal regulator or pressure-regulator valve can result in harsh engagements and shifting (see Figure 8).

Disassemble and clean valve body. Free up sticking valves or replace control-valve assembly as necessary if valves or bores are badly scored or damaged beyond repair.

Check to see whether the TCC-feed limit/blow-off ball valve in the case cover/channel plate is stuck and repair as necessary (see Figure 9).