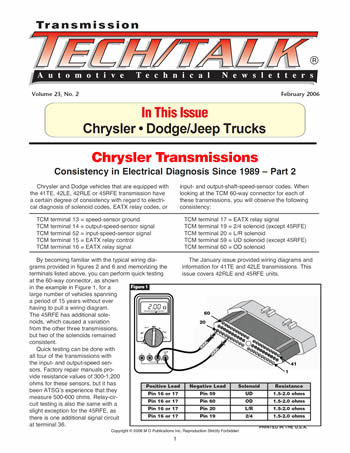 Chrysler and Dodge vehicles that are equipped with the 41TE, 42LE, 42RLE or 45RFE transmission have a certain degree of consistency with regard to electrical diagnosis of solenoid codes, EATX relay codes, or input- and output-shaft-speed-sensor codes. When looking at the TCM 60-way connector for each of these transmissions, you will observe the following consistency:

By becoming familiar with the typical wiring diagrams provided in figures 2 and 6 and memorizing the terminals listed above, you can perform quick testing at the 60-way connector, as shown in the example in Figure 1, for a large number of vehicles spanning a period of 15 years without ever having to pull a wiring diagram. The 45RFE has additional solenoids, which caused a variation from the other three transmissions, but two of the solenoids remained consistent.

Quick testing can be done with all four of the transmissions with the input- and output-speed sensors. Factory repair manuals provide resistance values of 300-1,200 ohms for these sensors, but it has been ATSG’s experience that they measure 500-600 ohms. Relay-circuit testing is also the same with a slight exception for the 45RFE, as there is one additional signal circuit at terminal 36.

This will require a scan tool (DRB III) that is capable of interfacing with the Mopar Diagnostic System 2 (MDS2) to download the necessary revisions.

When the reprogramming is complete, an Authorized Software Update Label (refer to Figure 9) must be placed near the emissions label.

The reprogramming process may cause diagnostic trouble codes to be stored in one or more modules. Be sure to complete the repair by clearing all DTCs.