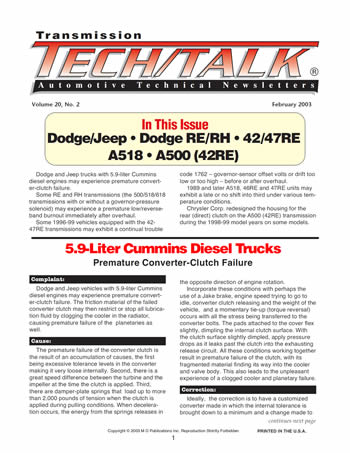 Some RE and RH transmissions (the 500/518/618 transmissions with or without a governor-pressure solenoid) may experience a premature low/reverse-band burnout immediately after overhaul.

Some 1996-99 vehicles equipped with the 42-47RE transmissions may exhibit a continual trouble code 1762 – governor-sensor offset volts or drift too low or too high – before or after overhaul.

1989 and later A518, 46RE and 47RE units may exhibit a late or no shift into third under various temperature conditions.

Chrysler Corp. redesigned the housing for the rear (direct) clutch on the A500 (42RE) transmission during the 1998-99 model years on some models.

Dodge and Jeep vehicles with 5.9-liter Cummins diesel engines may experience premature converter-clutch failure. The friction material of the failed converter clutch may then restrict or stop all lubrication fluid by clogging the cooler in the radiator, causing premature failure of the planetaries as well.

The premature failure of the converter clutch is the result of an accumulation of causes, the first being excessive tolerance levels in the converter making it very loose internally. Second, there is a great speed difference between the turbine and the impeller at the time the clutch is applied. Third, there are damper-plate springs that load up to more than 2,000 pounds of tension when the clutch is applied during pulling conditions. When deceleration occurs, the energy from the springs releases in the opposite direction of engine rotation.

Incorporate these conditions with perhaps the use of a Jake brake, engine speed trying to go to idle, converter clutch releasing and the weight of the vehicle, and a momentary tie-up (torque reversal) occurs with all the stress being transferred to the converter bolts. The pads attached to the cover flex slightly, dimpling the internal clutch surface. With the clutch surface slightly dimpled, apply pressure drops as it leaks past the clutch into the exhausting release circuit. All these conditions working together result in premature failure of the clutch, with its fragmented material finding its way into the cooler and valve body. This also leads to the unpleasant experience of a clogged cooler and planetary failure.

Ideally, the correction is to have a customized converter made in which the internal tolerance is brought down to a minimum and a change made to the fluid-coupling characteristics to lessen the speed differential and torque-reversal stress on the pads. Then, making modifications to the valve body to provide increased converter-clutch apply pressure during peak load conditions becomes profitable. Care must be taken here as well, because if line pressure is elevated enough to increase converter-clutch apply pressure, a code P1763 – “Governor Pressure Sensor Volts too High” – may be set.

Some RE and RH transmissions (the 500/518/618 transmissions with or without a governor-pressure solenoid) may experience a premature low/reverse-band burnout immediately after overhaul.

One such cause may be a cross leak between the spacer plate and channel plate near the area of the No. 3 checkball seat (see Figures 1 & 2). The cross leak may be the result of the spacer plate and channel plate being aligned incorrectly. This misalignment may allow minimal 3rd-gear oil pressure to cross over and intrude into the low/reverse-band circuit after a 2-3 shift has occurred. This minimal pressure is enough to make the band drag on the low drum in third and fourth gears, causing the premature failure of the band.

Remove the two bolts used to align the plate, re-use the same bolts to align the valve body, and torque all the attaching bolts to 35 lb.-in. After the unit has been repaired and re-installed, attach a pressure gauge to the low/reverse pressure port (see Figure 5) and ensure that 0 psi is present in third and fourth gears.

Some 1996-99 vehicles equipped with the 42-47RE transmissions may exhibit a continual trouble code 1762 – governor-sensor offset volts or drift too low or too high – before or after overhaul. This means that governor pressure, which is determined from the governor sensor, is higher or lower than the amount the computer has commanded.

Refer to the corrections below to repair this condition.

Example: If the Desired is 0 at 0 mph and the Actual is 20 psi, refer to Figure 7 and connect a 0- to 100-psi gauge to the governor-pressure port. If the pressure gauge reads 20 psi, this will indicate that the pressure solenoid is not doing its job and must be replaced.

Refer to Figure 8 for identification of the governor-pressure sensor and Figure 9 to verify the operation of the sensor.

1989 and later A518, 46RE and 47RE units may exhibit a late or no shift into third under various temperature conditions. This complaint also may be accompanied by a delayed engagement into reverse when the transmission is hot.

In some direct-clutch drums, the inner-seal groove was cut too deeply. This allows for the inner seal to be swallowed up into the groove, causing poor retention of fluid (see Figure 10). Another possibility is the outer lip seal being worn because of a poor finish on the drum in the contact area.

There also have been reports of the same complaint with the inner lip seals on A500 and 42RE-style units. In these cases, a lip seal from a 200-4R servo has worked very well in this location.

Chrysler Corp. redesigned the housing for the rear (direct) clutch on the A500 (42RE) transmission during the 1998-99 model years on some models. This clutch is applied in 3rd gear and reverse. Refer to Figure 11 for cutaway illustrations of both previous- and current-design housings.

None of the parts mentioned will interchange with any of the previous-design parts, but when used as a package they will retrofit all models of the Chrysler A500 (42RE) transmissions.