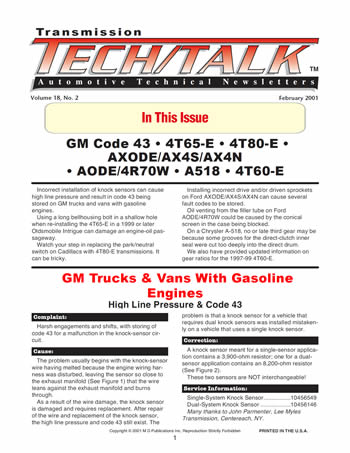 Incorrect installation of knock sensors can cause high line pressure and result in code 43 being stored on GM trucks and vans with gasoline engines.

Using a long bellhousing bolt in a shallow hole when re-installing the 4T65-E in a 1999 or later Oldsmobile Intrigue can damage an engine-oil passageway.

Watch your step in replacing the park/neutral switch on Cadillacs with 4T80-E transmissions. It can be tricky.

Installing incorrect drive and/or driven sprockets on Ford AXODE/AX4S/AX4N can cause several fault codes to be stored.

Oil venting from the filler tube on Ford
AODE/4R70W could be caused by the conical screen in the case being blocked.

On a Chrysler A-518, no or late third gear may be because some grooves for the direct-clutch inner seal were cut too deeply into the direct drum.

We also have provided updated information on gear ratios for the 1997-99 4T60-E.

Harsh engagements and shifts, with storing of code 43 for a malfunction in the knock-sensor circuit.

These two sensors are NOT interchangeable!

Many thanks to John Parmenter, Lee Myles Transmission, Centereach, NY.

An engine-oil leak has developed between the engine and transmission after re-installation of a 4T65-E in a 1999 or later Oldsmobile Intrigue with a 3.5-liter DOHC V-6 (VIN H) engine.

If one of the longer bellhousing bolts is installed in the No. 1 location, it will penetrate an oil passage-way in the back of the engine block, creating the complaint.

Make certain ALL installation personnel are made aware of this bulletin in order to avoid this catastrophe.

To avoid taking the time to rewire the connector for the park/neutral switch, unless necessary, remove the added guide rail in the new switch with a utility knife to allow the original connector to plug in (See Figure 5).

See Figures 6, 7 and 8 for identification and function of the terminals in the park/neutral switch.

A connector-repair kit also is available for the seven-terminal connector (See Figure 5).

During the road test after an overhaul, the Malfunction Indicator Lamp (MIL) begins to flash and the system defaults to Failure Mode Effects Management (FMEM). When code retrieval is completed, code 628 for TCC slippage, code P0741 for TCC stuck off or code P1744 for a TCC performance fault may be stored. Diagnosis of the TCC system reveals no faults. When these codes are cleared, they return on the next road test.

To help diagnose this problem, raise the front wheels off the ground and see whether these codes reset with no load on the vehicle. If they do reset, the chances are that it is a gear-ratio error and NOT converter-clutch slip.

The transmission-case vent contains a conical filter screen (See Figure 12). While the case was in the cleaning machine, detergent residue or other contaminants became lodged in the screen and restricted it, resulting in the complaints.

When air-blowing the case after it comes out of the “cooker,” be sure to blow air into the vent to ensure that the vent is clear. If it is not clear, either remove the screen or replace the vent assembly. It is recommended that the screen in the vent always be removed.

Many thanks to Ed Lee from Deltrans Inc., Newark, DE.

1989 and later A-518, 46RE and 47RE units may exhibit a late or no shift into third under various temperature conditions. This complaint also may be accompanied by a delayed engagement into reverse when the transmission is hot.

Some direct-clutch drums had the inner-seal groove cut too deeply. This allows the inner seal to be swallowed up into the groove, causing poor retention of fluid (See Figure 13). Another possibility is that the outer lip seal is worn because of a poor finish of the drum in the area where it contacts the outer lip seal.

There also have been reports of the same complaint with the inner lip seals on A-500 and 42RE units. In these instances, a lip seal from a 200-4R servo has worked well in this location.