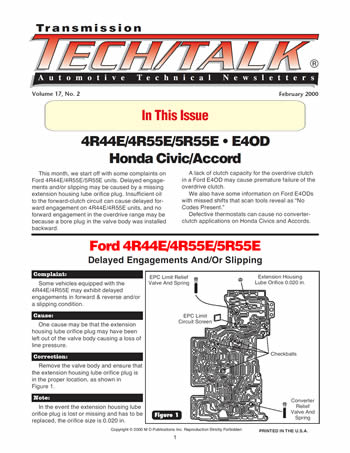 Some vehicles equipped with the 4R44E/4R55E may exhibit delayed engagements in forward & reverse and/or a slipping condition.

One cause may be that the extension housing lube orifice plug may have been left out of the valve body causing a loss of line pressure.

Remove the valve body and ensure that the extension housing lube orifice plug is in the proper location, as shown in Figure 1.

In the event the extension housing lube orifice plug is lost or missing and has to be replaced, the orifice size is 0.020 in.

Some vehicles equipped with the 4R44E/4R55E may exhibit delayed forward engagement.

One cause may be an insufficient volume of oil fed to the forward clutch circuit.

Some vehicles equipped with the 4R44E/4R55E may exhibit a no forward engagement condition in the Overdrive range but will move in manual 2nd, Low, and Reverse.

One cause may be that the bore plug that retains the forward modulator valve in the valve body was installed backward.

Some vehicles equipped with the E4OD transmission may exhibit premature failure of the overdrive clutches, especially heavier loaded vehicles.

The cause may be not enough clutch capacity for the overdrive clutch.

After rebuild, any vehicle equipped with the E4OD transmission may exhibit a condition of “missed shifts” on 2nd, 3rd and/or 4th gears. The scanner reveals No Codes Present, and when manually shifting with an aftermarket shift box the same condition exists.

A complaint of no converter-clutch application on 1996-97 Honda Civics (except HX Models) and 1996-97 Honda Accords (except V-6 Models) when the weather is cold.

The vehicles received marginally defective thermostats from the factory that will keep the engine from reaching normal operating temperature in cold weather, which in turn will inhibit converter-clutch application.

Perform the following test procedure according to Honda factory bulletin 97-025:

Note: The values in step 3 are calculated when outside temperature is below 30° F (-1° C).