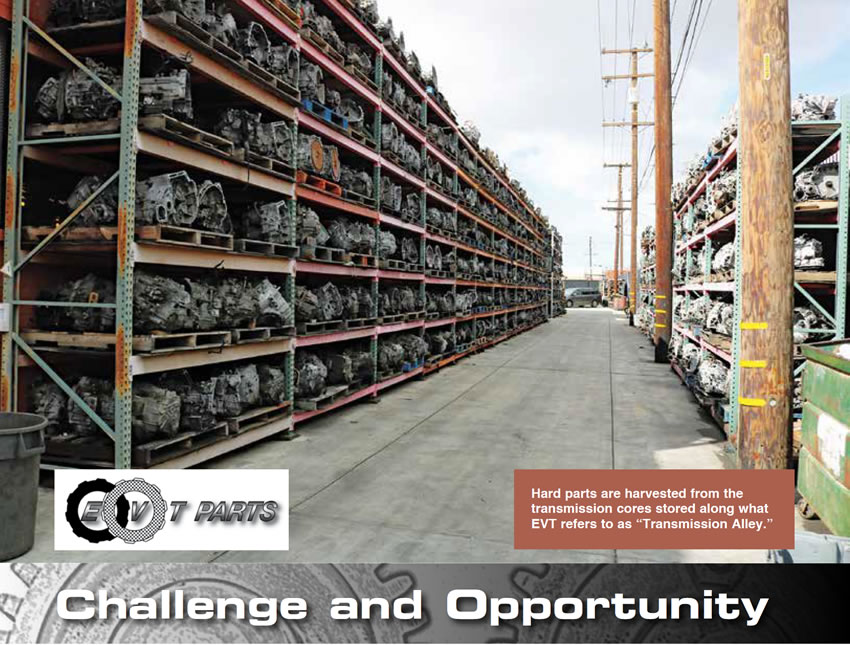 Every city in America offers a unique blend of opportunity and challenge for business people like Walter Quintanilla CEO of EVT Transmission Parts in Los Angeles. The L.A. area has more than 6.5 million vehicles providing opportunity for repair shops and parts suppliers alike.

Every city in America offers a unique blend of opportunity and challenge for business people like Walter Quintanilla CEO of EVT Transmission Parts in Los Angeles. The L.A. area has more than 6.5 million vehicles providing opportunity for repair shops and parts suppliers alike. Most of the challenge of being successful in such an environment, Quintanilla noted, has to do with the 34,000 square-mile sprawl of that Census Bureau-defined metropolitan area.

“This is a huge, spread-out market,” said Quintanilla. “I mean if you think about it there was a time when every home had one car and one telephone. Now there are still the same number of cars as there are phones, but today every adult has their own private cellular phone and their own vehicle. Depending on the size of the family there will be five or six of each,” Quintanilla explained.

“I would say that today local area sales are about 60% of our total business. That number includes orders picked up at the parts counter as well as our delivery routes. We have a lot of business at the parts counter. Some people just like to get a little break away from their shop. Customers will tell us, ‘every time I come here I relax and have a laugh … I should do this more often.’

“We run daily local deliveries using three trucks and three drivers that cover a 20-25-mile radius from our warehouse. We run those routes in the morning and then again in the afternoon. For all the orders outside our delivery area we ship, almost always the same day as the order is received.

“I would say that we serve different roles with different shop customers. There are shops that use EVT almost exclusively as a hard parts source.

These are shops that only call when they need a part, particularly those that are hard to find. While those are certainly customers, they aren’t ordering from us daily or several times a week. We count well over 1,000 shops in our computer customer list, not all of them order as frequently as those that are close to us.

“I keep having thoughts about expanding into other markets or adding locations, but I think the first rule of business is stick to what you know. I think about expansion because the soft parts side of the business is very localized, particularly for the guys who like to come here to pick up their parts. In the Los Angeles market, if you’re five miles away they can get it from another parts house.

“I think a lot of the larger shops in our area are disappearing. I blame that on the real estate market. The land has become more valuable than the business and so they’re walking away.

“When a customer shop gives us a complete order for one of today’s units, with all the electronics and such, it’s not unusual for that order to come to $600. Some guys still give us multiple orders for the same job. They’ll order the soft parts and then wait until the tear the unit down to see what else they need.

“We’re becoming more and more involved with the remanufacturing of hard parts. It’s become one of our specialties. A couple of hard parts sources in this area have closed down recently and this is an opportunity for us. We’re finding more gaps to fill in with parts. So, even though the overall market is shrinking some, we haven’t felt it here. I think we haven’t felt it because we’ve been able to add to our business many customers who used to buy from those companies.”

The company’s remanufacturing efforts employ five of the 13 people who work for EVT that also includes office staff, parts counter people and those who pull and assemble orders for customers.

“More and more we’re using the area and equipment that have in the past been used for converters as a machining department to support our hard parts business for cases, bellhousings, pumps, planets, et cetera,” Quintanilla continued.

“We’re doing less work with torque converters because they are becoming way more complicated than what used to be. Here, in the inner city, it’s not very productive or profitable. Less than a mile from here there are two converter companies. If one of those guys opens his front door he can see the other one right across the street.

Quintanilla became CEO of EVT operation about three to four years ago when company founder Vince Hall fully retired. He continued, saying: “Our company hasn’t changed much in that time, but the industry is changing quickly. We’re seeing fewer common [step] transmissions and more CVTs. More electronics and more manufacturers are selling direct, often via the Internet, to the end-user shops.

“Before I became CEO of the business, I’d managed the operation for 15 years. Vince would advise and trusted my decision-making process. Sometimes I had ideas and he’d tell me what he thought but then let me run with it. Not all of those were good ideas; some hit the fence. So, when the time was ready to make the transition to his retirement I had already enough mistakes that I knew pretty well what to do and what not to do. Now, I think about the only thing that has changed is that I get to sign the checks,” Quintanilla said with a grin.

“I worked one year at [Hall’s] EVT Transmission shop before they opened the parts house. My original job was cutting open converters. When they moved to the parts house, I was the one they gave a broom and a shovel, and they told me ‘we need to clean that building because we’re going to start moving everything over there.’ I was here even before day one cleaning up the Crocker Street location before we relocated here. Ten years later, when we moved to this building, I was the one saying to guys, ‘I need you to go over there and clean up that building because we’re going to be moving everything.”

“The common units for which EVT is filling customer orders aren’t much different from the units being serviced throughout the nation. Locally our customers are ordering a lot for 6L80 units although the 4L60 is still the king followed by the 4R75W units. As for Chrysler units, I would say more 518s than anything. We are stocking kits as well for the eight- and nine-speed Chrysler/ZF units.

“We depend a lot on Precision International kits because we know that when a customer wants a kit, he wants it now. Precision often tends to be first to market with their kits.

“We’ve been investing quite a bit into researching the CVT units as they are becoming a bigger part of the rebuilding market. We want to know everything about how they are rebuilt and we want to have all the components available for the customer. We’re stocking up on those parts like the pulleys because we know that the next wave of high volume rebuilds is going to be the CVTs. We’ve been able to purchase at pretty good prices because we’ve been a little ahead of the demand that’s just now coming,” Quintanilla said.

He said that there he finds there are always new opportunities to be explored. “Some of the area’s largest suppliers of general automotive parts will call on us when they need transmission parts. Typically, in those cases their delivery truck will stop by here, pick up the parts they need to fill an order and then deliver them to their customer. Again, those are typically the rare or hard-to-find hard parts rather than the popular numbers. And, there are times they call us for an older kit, say an ATX, that isn’t stocked in a lot of places anymore.

“We’ve been working too with some of the large volume transmission rebuilders as a source for the parts they need. It’s very hard to meet their demand because they’re looking for bulk items. They want to purchase Gaylord boxes of the same part. EVT has always been more geared to the retail shop customer that wants to purchase those parts one at a time.”

While many specialty transmission distributors have added a line of remanufactured units to their product mix, Quintanilla says EVT continues to be purely a parts house. “We don’t remanufacture transmissions and we don’t sell any reman units. We’re still in a marketplace where a lot of the shops see reman units as being competition. We’ve stayed away from adding those to our line because down here in the city there are many shops who would not do business with us if we sold those whole units.”

Quintanilla says his plans for future growth entail doing just what he’s always done. He says that he looks for opportunities and then evaluates whether or not his people and his facility can profitably take advantage. And, in a city where everybody drives a lot of miles and where a parts delivery route is constrained to no more than 25 miles, there are plenty of unique opportunities to assure that EVT continues to thrive.

Advertisement
In this article:EVT Transmission Parts