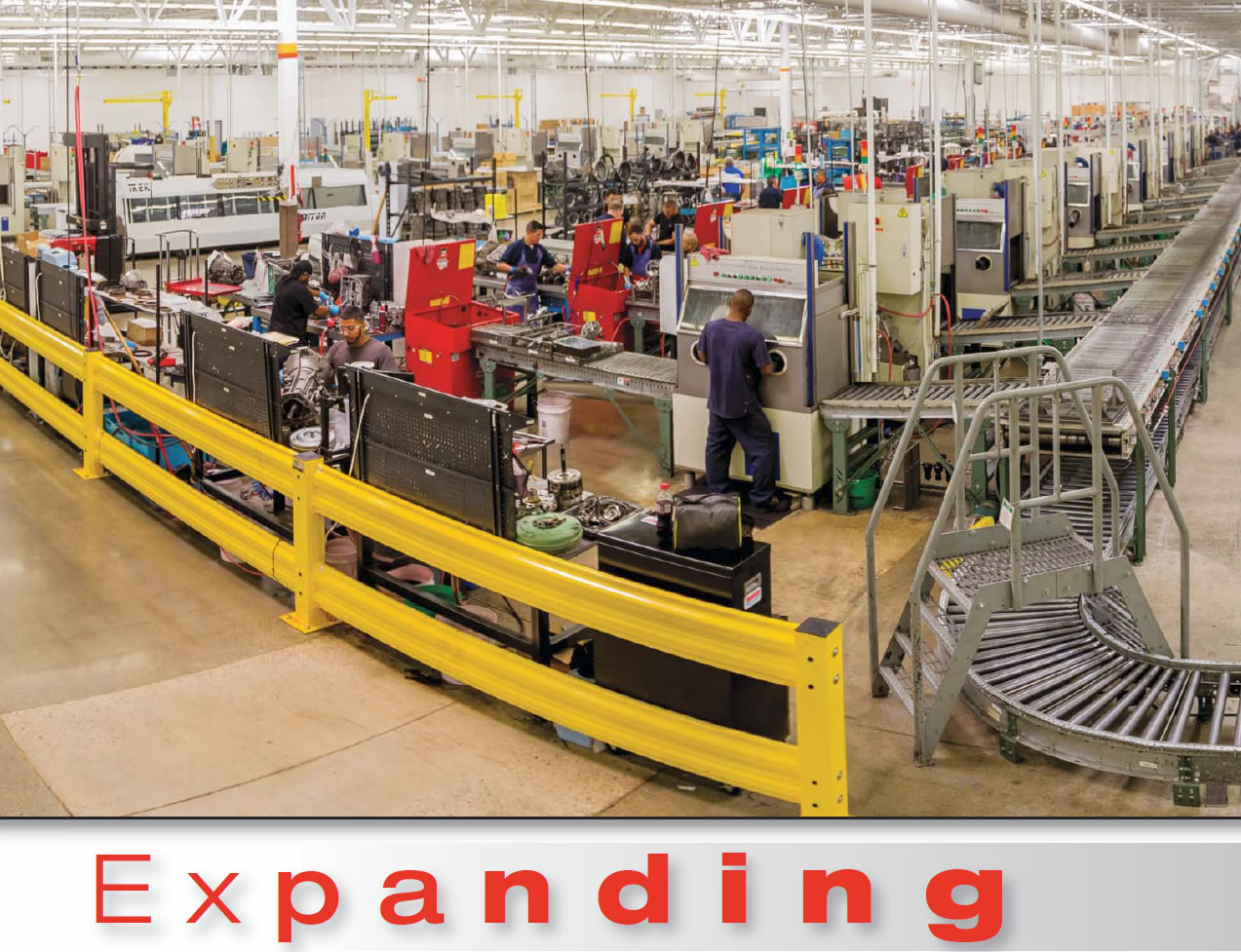 Three years ago, ETE REMAN purchased a former Walmart in Milwaukee, Wis., to address the growing demand for remanufactured transmissions. Adding 160,000 square feet has allowed ETE to grow its employee base to 450 people.
“As our production grew over the years, new departments were created to efficiently support demand. Using Lean, Six Sigma, and 5S philosophies, we did our best to create an efficient process. But moving parts from each department through the entire build procedure became difficult with the existing floor plan and lack of space,” says Lawrence Loshak, Vice President of Manufacturing.

Three years ago, ETE REMAN purchased a former Walmart in Milwaukee, Wis., to address the growing demand for remanufactured transmissions. Adding 160,000 square feet has allowed ETE to grow its employee base to 450 people.

“As our production grew over the years, new departments were created to efficiently support demand. Using Lean, Six Sigma, and 5S philosophies, we did our best to create an efficient process. But moving parts from each department through the entire build procedure became difficult with the existing floor plan and lack of space,” says Lawrence Loshak, Vice President of Manufacturing.

“The new facility has given way for new efficiencies. The superhighway conveyor system, with scanner and sensor technology, allows units to move through various remanufacturing stations and then strategically delivers them to the appropriate build cell. This has also given ETE the opportunity to train employees for more specialized jobs building components rather than delivering assemblies. We didn’t eliminate jobs or people. We trained and promoted them to positions to build and increase production,” Lawrence says. “Most importantly, it makes our people happy to be a part of the system, rather than just supporting it and pushing carts around.

“The production floor is divided into two mirror-image systems supporting six build cells. Each side has its own teardown department that feeds the conveyor system. After pre-cleaning, disassembled transmissions travel down the conveyor on special component trays. Valve body trays are identified by scanners and automatically pushed off the conveyor into the Valve Body Department.”

“Disassembly and valve body processes take place separately, but are still integrated,” adds Sam Loshak, ETE Founder and CEO. Cases and internal components travel through a large conveyor washer before the case is routed to the Painting Department. The internal parts ride on the conveyor and are delivered to the appropriate build cell, eventually reuniting with the remanufactured valve body and painted case.

“Each build cell, or ‘pod,’ is designed and balanced to have four builders, a dedicated dyno, and packaging station. An inspector oversees each of the two builders and prepares trays containing all necessary parts for them to build. Previous to the inspector, sub-assemblers prepare drums and other components.”

Lawrence explains, “The computer system is always maintaining a balance of work so that bottlenecks are minimized. It knows which people are logged in for the day, so it helps to keep an efficient, constant flow. Work is directed in such a way that there is very little time lost and each department is pulling and pushing one another.” The result is a drastic reduction in man-hours and a Henry Ford-style process.

According to Sam, ETE is unique in its ability to develop remanufacturing processes, components, and state-of-the-art testing equipment internally. “Executive Vice President Mikhail Shakhnovich, who is a mechanical engineer, and his team are responsible for the design, fabrication, and installation of 12 of their own custom dynos and valve body testing equipment. We built our own sophisticated quality control system so we can deliver a better solution to our customers,” he explains.

Lawrence continues, “We’ve also dramatically expanded our machining department, investing in multiple new pieces of Haas machinery and a climate-controlled environment for consistent precision. These machines give us the ability to remanufacture many components such as valve bodies and pumps via CNC, and produce the quality our customers expect from us.”

Testing and programming is a big challenge in the industry for many late-model transmissions. More and more units require reprogramming on-site after installation. “We’re trying to make it as easy as possible,” comments Noah Rickun, Vice President of Sales and Distribution. “We’re working with a partner that will allow customers in these situations to get the unit installed and call us directly for remote programming.”

Sam adds, “Vehicles don’t change much from year to year externally, but the opportunity to adapt and improve internal design is there.”
An increase in production and the room for additional dedicated research and development space are only a few of the areas that ETE has grown. “At 450 employees strong, ETE is actively hiring. Our people are the best in the industry. We just need more like them,” says Noah. “We’ve developed the infrastructure to double our production and we’re looking to fill those areas with industry- experienced builders, sub assemblers, supervisors, managers, and customer service specialists.”

Lawrence continues, saying, “beyond the walls and skylights on the production floor, more improvements are happening behind the scenes that mean a better experience for ETE’s customers. Advances like launching a cloud-based customer-support platform mean that installers can have complete visibility to technical questions, troubleshooting and warranty claims, cutting down on status delays. ETE also recently brought on a new freight and transportation management software company. This system provides real-time updates and tracking via email or text message about the location and arrival of orders.

“It’s a continuous process of identifying and keeping up with various demands. With a clear focus on the future, it’s hard not to sense the potential that exists everywhere for us to increase our service to our customers and to the aftermarket as a whole.”

ETE says its workforce carries a variety of industry experience, especially those in higher-level production positions. Many have been recruited from outside of Wisconsin. “I relocated from Panama City where I owned a transmission repair shop,” explains Mark Kidder, Build Process Manager. Mark started in the industry rebuilding for Mazda America and later working for Ameriparts and Drive Power USA. “I was ready for a change and looked at several options. I was very impressed with the leadership and processes running throughout the business.” Everything seemed to fit in place with what he wanted, so Mark and his family made the move to the Dairy State.