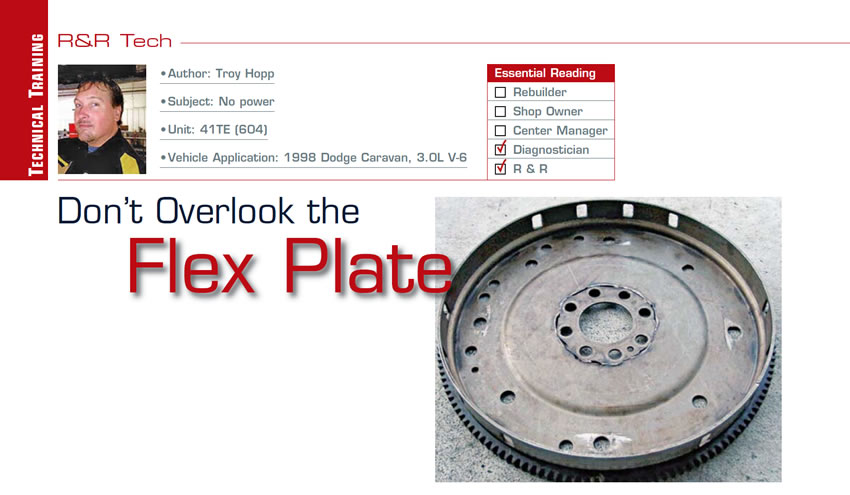 In the early 2000s, I was working as a transmission technician for a Dodge dealership in Omaha. I had been working there around five years. A customer brought in a 1998 Dodge Caravan equipped with a 3.0-liter V-6 and a 41TE (604) transmission. The customer complained that the vehicle had no power. He thought it was a transmission issue, so the Caravan was routed to me for diagnosis.

In the early 2000s, I was working as a transmission technician for a Dodge dealership in Omaha. I had been working there around five years. A customer brought in a 1998 Dodge Caravan equipped with a 3.0-liter V-6 and a 41TE (604) transmission. The customer complained that the vehicle had no power. He thought it was a transmission issue, so the Caravan was routed to me for diagnosis.

The first test was to scan the system for codes, but there were none to be found. A quick fluid-level and condition check verified normal transmission-fluid and engine-oil conditions. I road-tested the vehicle to verify the customer’s complaint, and the transmission shifted well despite the lack of power that was verified during the test drive. It seemed to have symptoms typical to those caused by a plugged catalytic converter. I then performed the plugged-exhaust vacuum test, which proved to be inconclusive and vague. To be certain, I unhooked the exhaust from the manifold and test-drove the vehicle again. There was still no power. This ruled out the exhaust system as a possible cause.

Next, I started looking at all the engine-sensor parameters (throttle position, engine-coolant temp, manifold absolute pressure, intake air temp, crankshaft- and camshaft-position sensors etc.) and all readings and oscilloscope wave forms read normal with no irregularities or glitches. The next step I took was to evaluate fuel pressure. Fuel pressure was about 50 psi, which is within specifications, along with normal long-term fuel-trim values. I also checked for solid secondary ignition and had good blue spark at the spark-plug wires.

The van was making no abnormal noises and sounded normal both during startup and while it was running. As I was going through more possible scenarios in my head, I started to consider spark and camshaft timing. The camshaft- and crankshaft-position sensors were obviously working since the engine started and ran, so I could rule those out. I knew that the crankshaft-position sensor was mounted in the transmission bellhousing and read off the flex plate/flywheel on this application, but since there were no abnormal noises during cranking and with the engine running, I really did not think that the flex plate was something that I should be suspecting at this point.

A quick check of the distributor spark timing indicated no problems there. My next step was to evaluate the condition of the timing belt, and the possibility of its jumping a few cogs and throwing the camshaft timing off. Following my suspicion, I removed the timing-belt covers for careful inspection. All timing marks lined up perfectly and the belt was in good shape. Yet another theory spoiled again, and I was starting to think that this was going to be quite a challenge and a great opportunity to learn something new.

I then proceeded to do a compression test, which would allow me to inspect the spark plugs at the same time. The spark plugs appeared normal, and the compression test was within specifications and consistent across all six cylinders. As I was still searching for ideas, I next considered whether a worn or broken camshaft could be the cause. Since the cam sensor reads from the front of the engine (via distributor), I thought I should not rule out a broken camshaft as a possible cause. Since the compression test doesn’t necessarily guarantee a healthy camshaft, I also wanted to make sure there were no flat lobes. I then removed both valve covers and verified that there were no broken or worn camshafts.

Naturally, I was starting to second-guess myself at this point; what was I possibly forgetting to check? Keep in mind that there were no abnormal noises and all PID data readings were normal. It seemed that I would need to do a visual inspection of the flex plate to verify its condition. Was it possible that the flex plate had cracked and turned on itself? Could it do this in a manner that could cause it to throw off the timing and still not make any abnormal noises while the engine was starting and/or running? At this point in my diagnosis I could not rule this out as a possible cause, and it was a long shot but I was desperate and running out of things to check.

So I turned the engine to top dead center and removed the crankshaft-position sensor to find that none of the notches in the flex plate were lined up with the crank-sensor provision – aha! Of course, I had to ask myself, “Why didn’t I check that first?” I needed to remove the transmission to inspect the flex plate, so I discussed this with the service manager. When we received the customer’s approval, I removed the transmission.

The bottom line is that you should always consider the flex plate as a possible cause for lack of power on these Chrysler V-6 engines with bellhousing-mounted crank sensors, even with no abnormal noises. This does not occur very often, but having this knowledge may prevent a few headaches as you diagnose similar issues. Learn from my mistake and don’t rule out the flex plate too soon during your diagnosis, as it just might save you some time.

Troy Hopp has been with Certified Transmission since early 2010. He has been in the industry for more than 25 years and is an ASE Master Technician. He is a diagnostician at one of Certified’s retail locations.