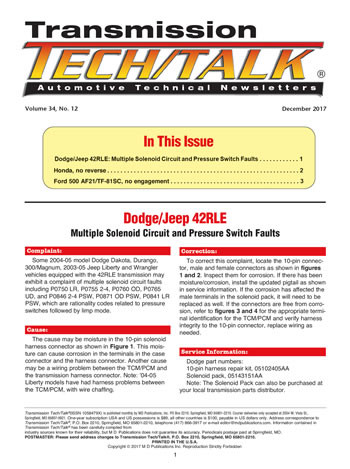 Note: ’04-05 Liberty models have had harness problems between the TCM/PCM, with wire chaffing.

To correct this complaint, locate the 10-pin connector, male and female connectors as shown in figures 1 and 2. Inspect them for corrosion. If there has been moisture/corrosion, install the updated pigtail as shown in service information. If the corrosion has affected the male terminals in the solenoid pack, it will need to be replaced as well.

If the connectors are free from corrosion, refer to figures 3 and 4 for the appropriate terminal identification for the TCM/PCM and verify harness integrity to the 10-pin connector, replace wiring as needed.

Note: The Solenoid Pack can also be purchased at your local transmission parts distributor.

A 2003 Honda CRV with an MCVA trans-mission exhibited a no-reverse condition after overhaul when a garage shift from park to reverse was performed.

After making certain the fluid level was correct, a number of park-to-reverse garage shifts were performed with the same no-reverse condition after which DTCs P0780 (Problem In Shift Control System), P0715 (Problem In Main Shaft Speed Sensor Circuit) and P0720 (Problem In Counter Shaft Speed Sensor Circuit). At this time a garage shift from park to drive was performed and then a shift into reverse, and reverse was present. When the vehicle was driven in its forward gears it shifted badly.

With a scan tool connected and a data list displayed and the vehicle in park, it was noticed that the main-shaft speed sensor read zero rpm but the counter shaft speed sensor was equal to engine rpm. This led the technician to inspect the speed sensor connections.

After connector inspection it was found that the main shaft and counter-shaft speed-sensor connectors were switched during the transmission installation process. This would cause the PCM to initiate the reverse lock-out feature resulting in a no-reverse condition when a garage shift from park to reverse was made because the PCM thought the vehicle was moving forward when in reverse.

The reason the vehicle had reverse when a garage shift from drive to reverse was made is because when shifted to drive with the foot brake applied, the main shaft was stopped, which the counter-shaft speed sensor was looking at, therefore the PCM did not see vehicle speed when it wasn’t supposed to because both sensors read zero and the reverse lockout would not be initiated.

Note: The CRV is not the only Honda application that this error can occur.

Ford 500 models, 2005 and up, may exhibit a condition of no engagement into drive or reverse.

The cause may be that the flexplate has flexed towards the crankshaft enough to pull the torque converter out of the pump creating no line pressure.

To correct this condition, refer to Figure 7 to view how to measure the flexplate to verify that it is bad.

Note the readings on the calipers and compare to the dimensions in Figure 8, which are known good. Replace the flexplate with the one listed in service information.