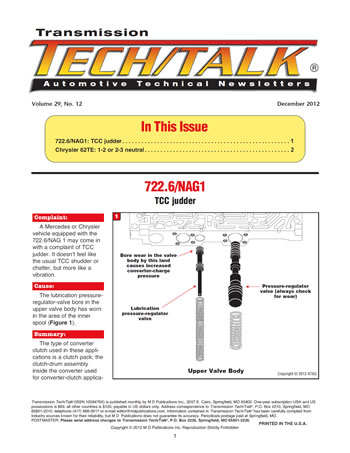 A Mercedes or Chrysler vehicle equipped with the 722.6/NAG 1 may come in with a complaint of TCC judder. It doesn’t feel like the usual TCC shudder or chatter, but more like a vibration.

The lubrication pressure-regulator-valve bore in the upper valve body has worn in the area of the inner spool (Figure 1).

The type of converter clutch used in these applications is a clutch pack; the clutch-drum assembly inside the converter used for converter-clutch application has a typical clutch pack, pressure plate and retaining snap ring (Figure 2).

The lubrication pressure-regulator valve regulates the converter “in” pressure, which becomes converter “out” pressure to the cooler.

When the inboard land of the valve wears, unregulated line pressure is able to get into the converter-charge “in” circuit, increasing the pressure inside the converter (Figures 4, 5 and 6).

This cross-leaking of pressure causes the clutch apply-and-release operation to be compromised, producing the vibration complaint (Figure 7). When the converter clutch is commanded on, the vibration stops, and depending on the integrity of the main line-pressure circuit, this application can be very abrupt. This is also why there is no lubrication problem when this bore wears, as it is not starving the lube circuit but rather increasing the pressure in that circuit.

2007-and-up Chrysler/Dodge vehicles equipped with the 62TE transaxle may exhibit a complaint of a 1-2 or 2-3 neutral upshift, which commonly occurs after overhaul and results in immediate limp mode. Note: Limp mode is 3rd gear, and if there is a neutral on the 2-3 upshift, limp mode in drive will result in a no-move condition until the ignition is cycled.

For a neutral on a 1-2 upshift, worn sealing-ring lands on the low-clutch housing causing a severe pressure loss to the direct clutch. Refer to figures 8 and 9 for a component- and solenoid-application chart and note that during the 1-2 upshift, the direct clutch comes on and causes the pinion shaft to turn 1-1.

See Figure 10 for location of the direct-clutch sealing rings and piston.

To correct the 1-2 condition: