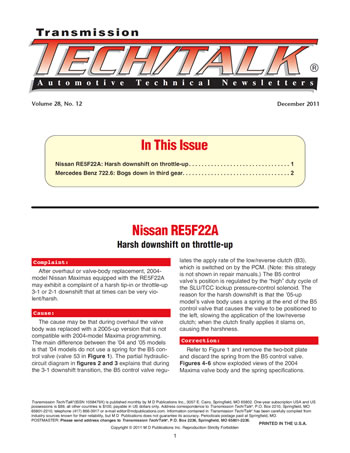 In This Issue
Nissan RE5F22A: Harsh downshift on throttle-up
Mercedes Benz 722.6: Bogs down in third gear

After overhaul or valve-body replacement, 2004-model Nissan Maximas equipped with the RE5F22A may exhibit a complaint of a harsh tip-in or throttle-up 3-1 or 2-1 downshift that at times can be very violent/harsh.

The cause may be that during overhaul the valve body was replaced with a 2005-up version that is not compatible with 2004-model Maxima programming. The main difference between the ’04 and ’05 models is that ’04 models do not use a spring for the B5 control valve (valve 53 in Figure 1).

The partial hydraulic-circuit diagram in figures 2 and 3 explains that during the 3-1 downshift transition, the B5 control valve regulates the apply rate of the low/reverse clutch (B3), which is switched on by the PCM.

(Note: this strategy is not shown in repair manuals.)

The B5 control valve’s position is regulated by the “high” duty cycle of the SLU/TCC lockup pressure-control solenoid. The reason for the harsh downshift is that the ’05-up model’s valve body uses a spring at the end of the B5 control valve that causes the valve to be positioned to the left, slowing the application of the low/reverse clutch; when the clutch finally applies it slams on, causing the harshness.

Refer to Figure 1 and remove the two-bolt plate and discard the spring from the B5 control valve. Figures 4-6 show exploded views of the 2004 Maxima valve body and the spring specifications.

After the transmission is rebuilt, the 2-3 shift feels like a slight bind-up yet also feels as if it is slipping. After a few attempts to shift into third gear, the transmission will go to failsafe.

When the transmission is removed and disassembled, the technician finds that the K2 friction plates’ teeth have cut into the aluminum rear-carrier lugs to which they index.

There are two different inside diameters for the K2 friction plates (Figure 7). The outside diameter and tooth configuration are the same for both, and each has 36 internal teeth.

The two different inner diameters accommodate the difference in size between the three- and four-pinion rear carriers (Figure 8). These differences are dependent on engine size.

When the frictions with larger inside diameters are installed on the smaller-diameter three-pinion carrier, the teeth of the K2 friction plate barely index the splines on the carrier (Figure 9).

With the teeth not fully indexed into the carrier, when a shift into 3rd takes place the quality of the shift is compromised, and the shift is described as a slight bind with a slipping sensation. The teeth then begin to spin around the carrier, cutting grooves into the carrier while damaging the friction teeth and spreading metal throughout the transmission.

Be sure to fit friction plates of the proper inside diameter to the three-pinion carrier design.