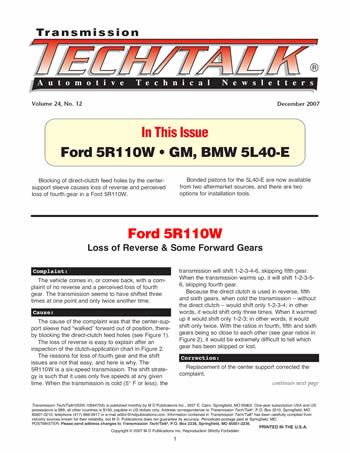 Blocking of direct-clutch feed holes by the center-support sleeve causes loss of reverse and perceived loss of fourth gear in a Ford 5R110W.

Bonded pistons for the 5L40-E are now available from two aftermarket sources, and there are two options for installation tools.

The vehicle comes in, or comes back, with a complaint of no reverse and a perceived loss of fourth gear. The transmission seems to have shifted three times at one point and only twice another time.

The cause of the complaint was that the center-support sleeve had “walked” forward out of position, there-by blocking the direct-clutch feed holes (see Figure 1).

The loss of reverse is easy to explain after an inspection of the clutch-application chart in Figure 2.

Replacement of the center support corrected the complaint.

Option 1. Use the sizing cones and Seal-E-Zee spray available from Lubegard (see Figure 3). Size the inner and outer seals of the piston with the cones, then spray the rubber as directed on the label. This will freeze the rubber so the piston can be installed.

Option 2. Buy the installers from your local distributor or SPX’s Kent-Moore.

Note: The Kent-Moore numbers listed are for 2002-up models only. Refer to the following updated part numbers.