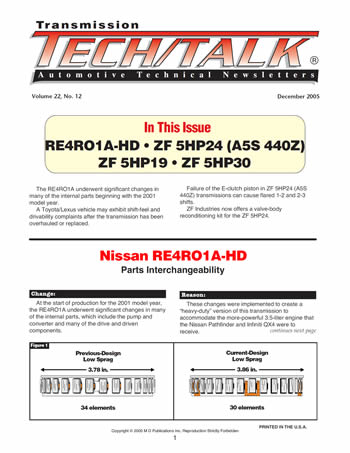 At the start of production for the 2001 model year, the RE4RO1A underwent significant changes in many of the internal parts, which include the pump and converter and many of the drive and driven components.

These changes were implemented to create a “heavy-duty” version of this transmission to accommodate the more-powerful 3.5-liter engine that the Nissan Pathfinder and Infiniti QX4 were to receive.

Part 12. A number of the internal bearings have changed from the closed one-piece design to the open two-piece design.

Interchange of all the parts mentioned is possible; however, a great deal of attention must be paid to clearances between all involved components. Take care when exchanging pump assemblies, since some pump covers have provisions for a turbine-speed sensor and some do not. The use of this speed sensor also requires a case that can accommodate the sensor (it has a hole). The input shaft must also have a splined reluctor to excite the turbine-speed sensor, as some do not have these splines.

NOTE: If you put in a pump that has the hole for the turbine-speed sensor without the speed sensor in the hole, a no-move condition will result, because all converter-charge oil will be dumped out of the speed-sensor hole.

The vehicle exhibits shift-feel and drivability complaints after the transmission has been overhauled or replaced.

The ECM reset procedure for the following vehicles is performed with a capable scan tool only:

The ECM reset procedure for the following vehicles can be performed with a capable scan tool or by a manual method:

Note: The following operations may need to be performed:

Procedure for initialization of moon roof:

Procedure for initialization of power windows:

Use the illustration in Figure 9 for the correct map reference number for compass calibration.

The transmission exhibits flared 1-2 and 2-3 shifts. P0732 and P0733 “Gear Control Malfunction 2nd and 3rd” codes are stored. Disassembly and inspection of the transmission reveal that the E-clutch piston is badly cracked (refer to Figure 12).

This condition is seen primarily in the Audi A8 and Jaguar XK8/XJ8 models. At this time the cause is unclear; however, it may be non-commanded line-pressure spikes.

ZF Industries has made available to the aftermarket original-equipment valve-body reconditioning kits. These kits include new valve springs; orifice plugs; small parts, including checkballs; and any other valve updates that have been made. Previously, only two kits were available, for ZF 5HP19 and ZF 5HP30. Now a kit is available for the ZF 5HP24 valve body (see Figure 13).