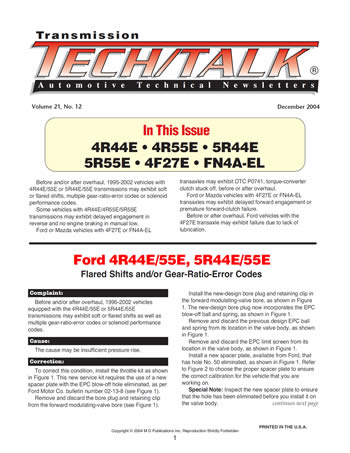 Before and/or after overhaul, 1995-2002 vehicles with 4R44E/55E or 5R44E/55E transmissions may exhibit soft or flared shifts, multiple gear-ratio-error codes or solenoid performance codes.

Some vehicles with 4R44E/4R55E/5R55E transmissions may exhibit delayed engagement in reverse and no engine braking in manual low.

Ford or Mazda vehicles with 4F27E or FN4A-EL transaxles may exhibit DTC P0741, torque-converter clutch stuck off, before or after overhaul.

Before or after overhaul, Ford vehicles with the 4F27E transaxle may exhibit failure due to lack of lubrication.

Before and/or after overhaul, 1995-2002 vehicles equipped with the 4R44E/55E or 5R44E/55E transmissions may exhibit soft or flared shifts as well as multiple gear-ratio-error codes or solenoid performance codes.

The cause may be insufficient pressure rise.

To correct this condition, install the throttle kit as shown in Figure 1. This new service kit requires the use of a new spacer plate with the EPC blow-off hole eliminated, as per Ford Motor Co. bulletin number 02-13-8 (see Figure 1).

Remove and discard the bore plug and retaining clip from the forward modulating-valve bore (see Figure 1).

Remove and discard the previous design EPC ball and spring from its location in the valve body, as shown in Figure 1.

Remove and discard the EPC limit screen from its location in the valve body, as shown in Figure 1.

Install a new spacer plate, available from Ford, that has hole No. 50 eliminated, as shown in Figure 1. Refer to Figure 2 to choose the proper spacer plate to ensure the correct calibration for the vehicle that you are working on.

Special Note: Inspect the new spacer plate to ensure that the hole has been eliminated before you install it on the valve body.

Some vehicles equipped with the 4R44E/4R55E/5R55E transmissions may exhibit a delayed engagement in reverse and no engine braking in manual low.

One cause may be a weak reverse-modulation-valve spring.

Install a 7⁄32-inch (C-4) checkball in the end of the reverse modulation valve (see Figure 3) as a shim to increase spring tension.

If bore plug No. 4 is difficult to remove, remove the 3-2 valve line-up on the opposite side of the valve body (Figure 4) and gently tap out the reverse modulation valve with a long 5⁄32-inch pin punch until the bore plug pops out.

Ford or Mazda vehicles equipped with the 4F27E or FN4A-EL transaxles may exhibit a trouble code P0741, torque-converter clutch stuck off, before or after overhaul.

The cause may be that the bushings in the rear of the pump stator are worn, causing a loss of converter apply oil (see cutaway in Figure 5) when the TCC is applied.

Note: When the stator bushings wear, TCC apply pressure will be exhausted through the already exhausting TCC release pressure.

Refer to Figure 6 for the identification of the turbine shaft and stator passages.

Refer to Figure 7 to air-check the turbine shaft to ensure that the bushings are worn.

Ford or Mazda vehicles equipped with the 4F27E or FN4A-EL transaxles may exhibit a delayed forward engagement or premature forward-clutch failure.

Before or after overhaul, Ford vehicles equipped with the 4F27E transaxle may exhibit failure due to lack of lubrication.

The cause may be a restricted transmission-oil cooler limiting the amount of lubrication oil, which is fed to the rear-case fitting as shown in Figure 11.

The direct/reverse-clutch drum bushing and the sealing-ring journal on the rear cover are the most-common failures with lack of lubrication. See Figure 12 for a cross-sectional view of the lube circuit.

Replace the external transmission-oil cooler (see Figure 13). Note: This cooler is extremely hard to flush and should be replaced, according to Ford.