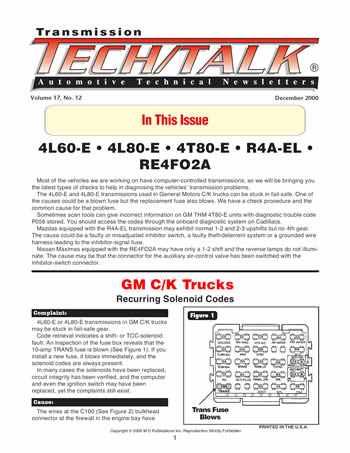 Most of the vehicles we are working on have computer-controlled transmissions, so we will be bringing you the latest types of checks to help in diagnosing the vehicles’ transmission problems.

The 4L60-E and 4L80-E transmissions used in General Motors C/K trucks can be stuck in fail-safe. One of the causes could be a blown fuse but the replacement fuse also blows. We have a check procedure and the common cause for that problem.

Sometimes scan tools can give incorrect information on GM THM 4T80-E units with diagnostic trouble code P056 stored. You should access the codes through the onboard diagnostic system on Cadillacs.

Mazdas equipped with the R4A-EL transmission may exhibit normal 1-2 and 2-3 upshifts but no 4th gear. The cause could be a faulty or misadjusted inhibitor switch, a faulty theft-deterrent system or a grounded wire harness leading to the inhibitor-signal fuse.

Nissan Maximas equipped with the RE4FO2A may have only a 1-2 shift and the reverse lamps do not illuminate. The cause may be that the connector for the auxiliary air-control valve has been switched with the inhibitor-switch connector.

Code retrieval indicates a shift- or TCC-solenoid fault. An inspection of the fuse box reveals that the 10-amp TRANS fuse is blown (See Figure 1). If you install a new fuse, it blows immediately, and the solenoid codes are always present.

The wires at the C100 (See Figure 2) bulkhead connector at the firewall in the engine bay have been corroded by the elements and are shorting out. In many instances, on close inspection of these wires you will find green corrosion and notice that the wire insulation has been eroded, causing the short circuits and the complaints.

Remove the C100 bulkhead connector and repair the wiring, fill the connector cavities with a high-quality dielectric grease, replace the 10-amp TRANS fuse, clear all codes and verify proper operation.

Some 1993-96 Cadillac vehicles equipped with the THM 4T80-E transaxle may have a second-gear start with trouble code P056 stored in the PCM. You should use the onboard diagnostic system to access trouble codes, which will be displayed on the climate-control center. We have seen scan tools give us incorrect information on these models.

The cause may be a defective turbine-shaft-speed sensor, which is under the channel plate and is triggered by the drive sprocket, as shown in Figure 3.

Replace the turbine-shaft-speed sensor with a new OEM part, available under OEM Part Number 8685532. We also have provided you with wire-connector pin identification for both case-connector configurations so that you can check the resistance values on the TSS and shift solenoids. See Figure 4 for the 1993 case connector and Figure 5 for the 1994 and later case connector.

Since this has been the No. 2 problem that we have been faced with on the telephone, we highly recommend making the TSS a mandatory-replacement part on every rebuild because of its location.

Mazda MPV vehicles equipped with R4A-EL transmissions may exhibit normal 1-2 and 2-3 upshifts but no 4th-gear upshift before or after overhaul.

The cause may be a faulty or misadjusted inhibitor switch, a faulty theft-deterrent system or a grounded wire harness leading to the inhibitor-signal fuse. Mazda shift strategy requires a signal from the inhibitor switch, which provides the control unit Load/No Load input or Park/Neutral position signal. This 12-volt signal is from the ECU and is shared with the TCM, cruise-control unit and instrument cluster. This voltage is grounded or 0 volts when the vehicle is in the Park or Neutral position and 12 volts in Reverse, Drive, manual 2nd and manual 1st. If the TCM does not see 12 volts when the selector is in the Drive position, the TCM will think it is still in Park/Neutral and may not attempt an upshift into 4th gear even though there is a 12-volt input from the inhibitor switch telling the TCM that Drive has been selected.

Follow the steps listed, and repair or replace as needed:

Step 1: Connect the positive lead of the voltmeter to either terminal in the back of the inhibitor-signal fuse and the negative lead to a known good ground, as shown in Figure 6, and turn the ignition switch on.

Step 2: Remove the inhibitor-signal fuse (See Figure 7) and use the positive lead to probe terminal B with the ignition switch on. The voltmeter should indicate 12 volts in all shifter positions. If the voltmeter indicates 12 volts in all ranges, go to Step 3.

Note: The ECU, TCM, instrument-cluster and cruise-control wires are spliced together before they reach the interior fuse panel.

Step 3: With the positive lead of the volt-meter, now set to ohms, probe terminal A in the interior fuse panel with the ignition switch off, as shown in Figure 8. The ohmmeter should indicate continuity in only the Park and Neutral positions and should indicate open or O.L. in all other ranges.

The transmission makes only a 1-2 shift, and the reverse lamps do not illuminate. The power lamp does come on for 2 seconds when the ignition is turned on and then goes out.

When the correct code-retrieval procedure is initiated, the power lamp does not respond and engine idle is erratic.

The connector for the auxiliary air-control (AAC) valve was switched with the inhibitor-switch connector.

Reconnect the inhibitor-switch connector and AAC-valve connector to the correct vehicle harness connectors.

The confusion on the part of the technician doing the engine swap results from the fact that these connectors have the same configuration (See Figure 10) and both are in the same general location of the engine bay (See Figure 11).

A Mazda MPV equipped with the R4A-EL transmission that requires replacement of the inhibitor switch may experience no 4th gear after installation of the new inhibitor switch.

Note: Not all switches will have the following wire colors. If the switch does not have the wire colors shown in Figure 12, this bulletin does not apply.