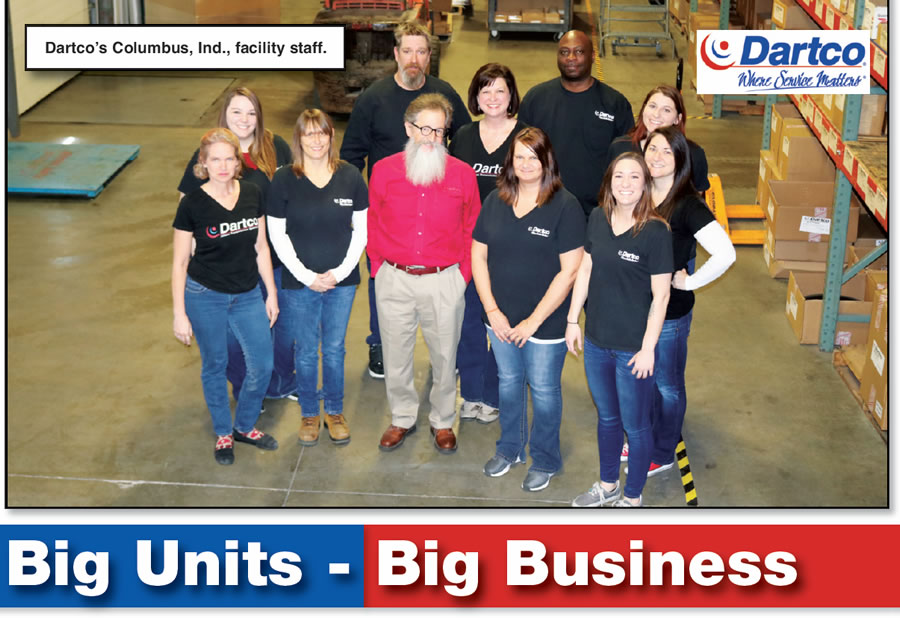 “Dartco serves about 2,500 different customers over the course of a year. Of that we have 300-400 who are consistent customers; those who are ordering on a daily or weekly basis from us,” explains the company’s CEO, J.R. Sellars.

“Dartco serves about 2,500 different customers over the course of a year. Of that we have 300-400 who are consistent customers; those who are ordering on a daily or weekly basis from us,” explains the company’s CEO, J.R. Sellars.

Sellars says he is optimistic that the economy is about to take on new life this year. While he doesn’t give complete credit to the president for the so-called “Trump Bump,” he says there are a number of positive signs that the economy is taking off.

“I’ve been tracking the number of new customers opening accounts with us for the past few years,” he continued. “Not only is our customer base growing but we’ve seen it growing at an increasing rate over the past three or four years. That means our name is getting out there and that we’re penetrating the marketplace.

“Allison Transmissions is all we’ve done since opening in 1978 (see Transmission Digest, December 2013). We have not been engaged in the automotive (passenger car) side of the business, we don’t do manuals but strictly Allison for on-highway, off-highway and military applications.

“Typically we’re dealing with vehicles like school busses, trash trucks, delivery trucks and motor homes in addition to the military applications. A significant share of that business is likely to come from fleets of one sort or another. We’re working hard to find that contact business throughout the country. That work would include municipal and local government contracts as well as private fleets. All of those contracts are the responsibility of Barry Jeshurin, who is our national sales manager whose efforts are paying off as we’ve recently signed some very good contract accounts.

“As specialists, we try to encompass the whole product line, including Allison O.E.M. new, used and rebuilt parts, cores and overhauled units.

“We wear two hats as a parts distributor and a remanufacturer. When we started business, we were focused on being a reman center. As we grew, parts sales eclipsed the reman business. We have two reman facilities located in Anaheim, Calif., and Charlotte, N.C. Both of those locations are Allison dealers that perform new-product warranty work and remanufacture Allison transmissions. Combined together we’re probably rebuilding 150-plus units a month.

“For the past five years we’ve been concentrating on having a uniform product coming out of our four facilities. Right now we’re making sure that as we concentrate on increasing the Dartco branded reman business that we pay attention to things like standardizing paint color, the pricing and all the other things that allow the brand to be recognized and consistent no matter which facility did the rebuild.

“We’ve added salespeople to go personally knocking on doors to bring us contract and fleet business. We are taking a harder look at government work that specifies Allison. We’re building both our contract and our internet business.

“That brings us to this year in which we are expanding both the Columbus, Ind., and Royse City (suburban Dallas) Texas location. Both of these locations sell both Allison remanufactured units and parts .

“Nearly everything that we sell conforms to O.E. specifications. There are companies out there that cater to racing or high-torque applications but that’s not something we choose to focus on here. We can’t warranty something used in racing and the liability of having a unit come apart and injure the driver is something I’m not wanting to be involved with. That said, we sell components to the guys who specialize in that kind of work but we don’t want to compete for their business of modifying units beyond their original intended limits.

Based on recent business gains and the expectation of a strong economy, Sellars says the company is expanding its capacities. “We own an acre and a half adjacent to this (Columbus) building where we plan to be expanding within the year. We trademarked our Dartco Reman brand about a year ago.

This branding applies to all of the non-warranty rebuilt units we sell. We’re stepping up efforts and growing that business and we see that brand name picking up an expanded following.”

According to Sellars the Dartco Reman line follows a lot of the philosophy of the OEM. He says that rather than worry about some key components, we replace with new converters and solenoids on our reman units.

“Most truck dealerships no longer work on the units and have come to rely on the Allison rebuilt transmissions for both warranty and non-warranty units.

What sets us apart is that we’re totally entrenched in that segment of the industry. Our advantage is the depth of knowledge our people have from an exclusive focus on Allisons. That’s the reason we compete so well for this segment business.

From the standpoint of distributing parts for Allison, Sellars tells us that the advantage goes to the guys with the most volume and the most experience:

“Our approach to serving rebuilders includes a certain amount of filtering. One approach we see often used is like fishing with a net and swooping up everybody that’s in the business. That approach gives you the good, the bad and the ugly, so to speak.

“There’s a difference between the Allison units and the typical automotive units. So the need for support is great when shops aren’t used to working on these products and it takes a lot of our time in sending them pages of manuals and that sort of thing. That makes that sale transaction very expensive.

And, if the order isn’t right then we have returns and once again, that’s an expensive transaction for us to support.

“There isn’t a one-part-fits-all where Allison is concerned. While there may only be 30 or 40 models of Allison units, there are literally hundreds of variations that each have parts differences. It takes a good bit of knowledge to be able to know which version of a unit is on the bench and what parts are needed for a rebuild. There are converter differences, clutch pack differences and valve body RPM differences and a host of small variables that play a part in the successful rebuild.

“Dartco offers a toll-free number at each of the facilities and we offer support as well. I’ll field a call where a guy is ready to install a unit but he doesn’t know what the pressures should be or how many quarts of oil should be put in; something like that. I have a guy here who’s been around 50 years working on these units and I’ll funnel those calls to him. And, we’ll send information to that customer including bulletins that update the information for a particular unit.

“That line’s being utilized more and more. We want to have those customers feeling secure and calling us back. The knowledge our people have leads to increased sales.

“We never have been a company that tries to hire good people away from others in the marketplace. We train our people internally, somewhat of an apprentice type of approach. They start at the bottom and work their way up the ladder as they become more knowledgeable and more capable. It takes a little longer to bring somebody up through that process, but it allows that person to develop our mindset, vision and focus as well as the mechanical skill set.”

Sellars concludes with a forward looking and optimistic explanation for what he sees as having made Dartco successful: a philosophy that he sees as the key to a growing future for his company.

“There’s a lot of work left to do. Our best years are still ahead of us. I have a son out in California who wants to take the ball and run with it, and I have another son who works here with me in Columbus.

“Our reman business is taking off and our parts sales are growing. I attribute much of the parts sales success to the revamped website that makes ordering parts much easier. In the early days of that site we might be getting one or two inquiries a day. Today we’re getting two or three-dozen.