The TR3650 is manufactured by Tremec Corp., a state-of-the-art transmission manufacturer with facilities in the United States and Mexico. Tremec bought the standard-transmission line from BorgWarner Corp. and continues to manufacture the T5, T45, TR3550, TKO and T56 transmissions.

It may seem obvious initially, but when you’re talking about transmission orifices, size does matter. What may be surprising, though, is how significant a difference in vehicle performance small changes in orifice diameters can make. This becomes important when you’re considering modifications to separator-plate holes (see Figure 1) or cup-plug orifices (see Figure 2) during a rebuild.

A 1997 Ford E 250 van equipped with a 4.2-liter engine and a 4R70W transmission comes into the shop with a complaint of falling out of fourth gear into third at highway speeds. In local traffic, however, the transmission acts like a C6 with a stuck governor; it remains in second gear as you come to a stop and “dunks” down into first gear.

Before or after overhaul, Volkswagen/Audi vehicles equipped with the 01M transaxle may exhibit no forward engagement or a slipping condition on take-off in first gear.

Beginning at the start of production for 1999 models, all THM 4L80-E transmissions were built with a revised manual-2nd band that is wider than the previous design.

Beginning at the start of production for all 1999-model THM 4L80-E transmissions, the planetary pinions on both carriers were produced 10% thicker than in the previous models.

Some 1995-96 Buick Century and Oldsmobile Ciera vehicles equipped with the 3.1-liter engine and the THM 4T40-E transaxle may exhibit a condition of third-gear starts and the air conditioner not working.

Some 1993-95 Cadillacs equipped with the THM 4T80-E transaxle may illuminate the Service Engine Soon lamp and store P080 as a current code. After you try to clear the code, it remains as a hard code.

Before and/or after rebuild of a THM 4T40-E, the vehicle illuminates the Check Engine lamp and stores code P1887 or P0742 in memory. 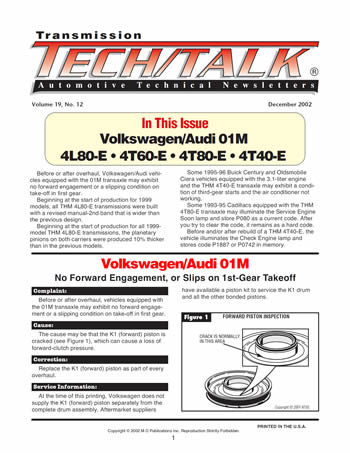 Is Your 4WD Explorer Neutralizing?