One of the best-selling and most-popular vehicles is the Ford Explorer and its cross-brand clones, the Mercury Mountaineer and the new Lincoln Aviator. These SUVs have been the volume leaders in their class and as such have provided us with lots of repair work as they have aged. Most of these vehicles were equipped with a BorgWarner 44-05 transfer case, and a lesser number were equipped with the BW 44-04 all-wheel-drive transfer case. 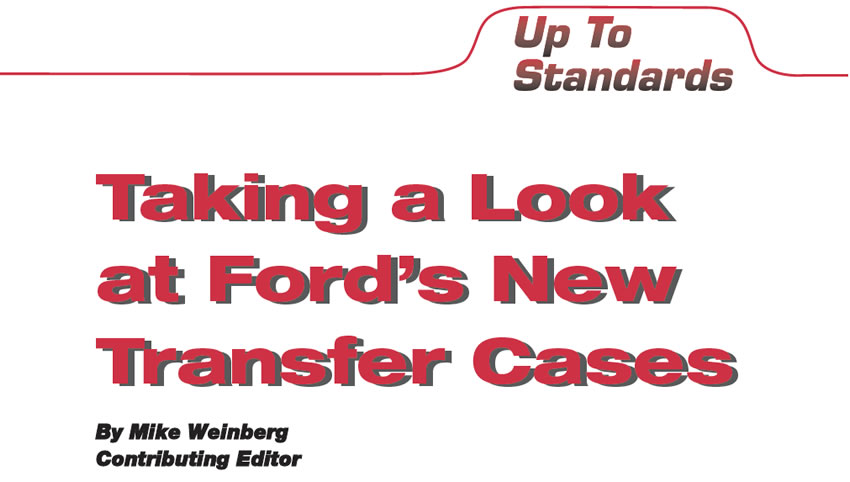 4R44E/4R55E or 5R55E units in 4WD Ford Explorers fall out of gear while either on throttle or coasting, and at times there is a ratcheting noise.

Chrysler LH vehicles with 3.5-liter engines may experience a code 1391 after transmission replacement.

Before or after overhaul, Chrysler or Jeep vehicles with 42RE-46RE transmissions may exhibit stalling in Reverse or repeated planetary failure. 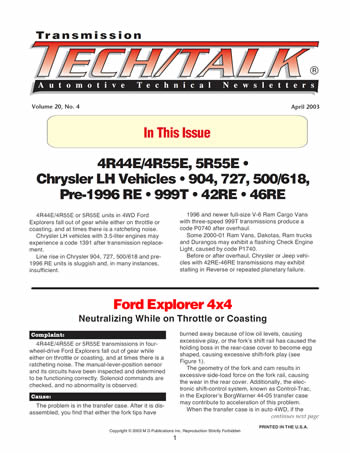 Fix in a Flash

Occasionally, we find the problem to lie outside the transmission/transaxle, in such parts as the MLPS (manual-lever position sensor), TPS (throttle-position sensor) or MAP (manifold-air-pressure) sensor, to name a few. Though it’s rare, even the computers/modules (such as the vehicle control module (VCM), transmission control module (TCM), powertrain control module (PCM) or engine control module (ECM)) fail from time to time. We have become accustomed to troubleshooting these systems, and although they are becoming somewhat routine, we all know that we run into some problems that “push” you. They either push you into being a better technician or push you closer to finding a different occupation.

To Flash or Not to Flash

At this point, everyone is familiar with the fact that most 1996 and later GM vehicles are equipped with computers that must be programmed (flashed) in order for the vehicle to operate properly.

What some technicians may not be familiar with is the fact that earlier GM vehicles were equipped with PCMs that are also flashable. As a matter of fact, you could have a GM vehicle as early as the 1993 model year that is equipped with a flashable PCM. This is mostly because GM was the pioneer in developing the EEPROM and the programmable process.

The Toyota Prius P111 hybrid transaxle shown in Figure 1 is a continuously variable transaxle. If you are already familiar with a Subaru Legacy or a Honda Civic HX, you might think this is another CVT with a belt and pulleys. Not this unit…