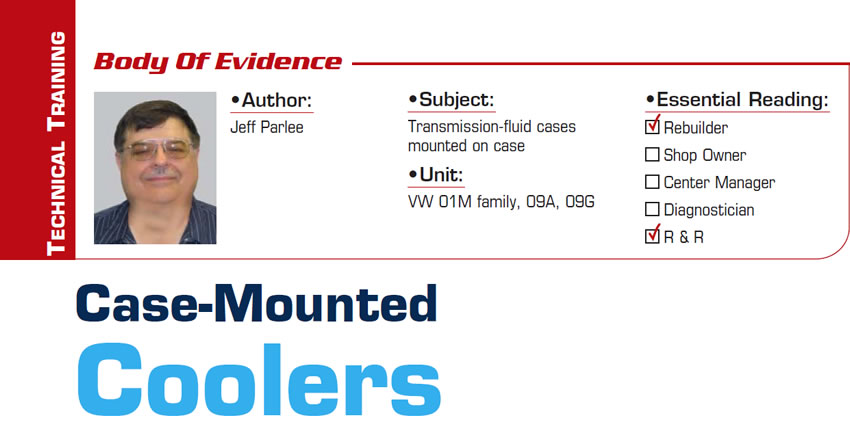 Case-mounted transmission-fluid coolers that are used by Volkswagen and other manufacturers are effective at warming and cooling the transmission fluid. The 01M family, 09A and some 09G transmissions use a case-mounted cooler.

Case-mounted transmission-fluid coolers that are used by Volkswagen and other manufacturers are effective at warming and cooling the transmission fluid. The 01M family, 09A and some 09G transmissions use a case-mounted cooler.

Volkswagen coolers use a honeycomb design in the cooler chambers (Figure 1), making it virtually impossible to flush fine metal or friction material out during a rebuild (Figure 2). When you reuse a contaminated cooler, the new hot fluid slowly forces the friction material and metal out of the cooler, and these contaminants find their way to the valve body, sticking valves and causing pressure, shift and lockup problems.

Removing and repairing the valve body will be only a temporary fix, because the contaminants will continue to flow from the old cooler. Figure 3 shows how the oil comes and goes through the two hollow bolts that retain the cooler to the case.

On the 01M valve body, the cooler return oil flows through the TCC apply valve, causing it to stick usually in the applied position, keeping lockup turned on and killing the engine at a stop. Both the 09A and 09G cooler return oil goes through the valve body before going on to lube circuits. Even if you are lucky enough to avoid sticking valves, unfiltered oil from the cooler is going to the bushings and bearings in the lube circuit. If there is fine metal in the oil, the bushings and bearings are going to wear prematurely.

Unfortunately, at this time there is no alternative for the 09A and 09G. Replacing this cooler is an important step in avoiding a comeback or a never-leave.

Jeff Parlee is director of product support at ValveBody Xpress.