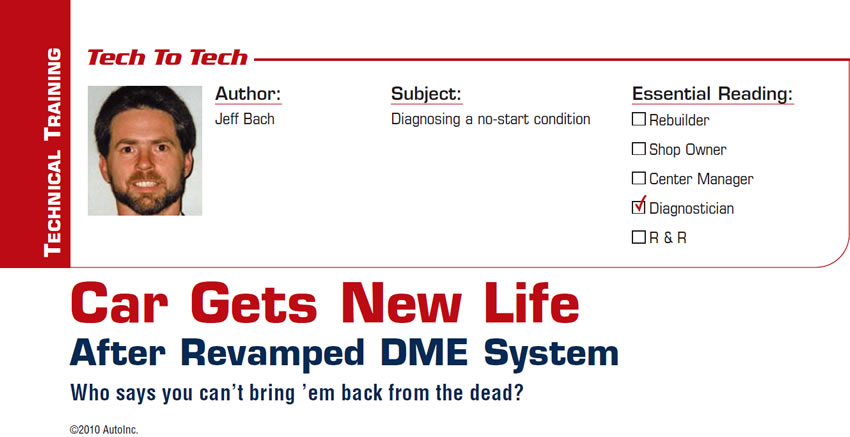 Who says you can’t bring ’em back from the dead?

The car sitting in front of my bay was towed in last night for a no-start problem. Looking at it gives me that “Here-I-go-again” feeling. The chalky paint is oxidized from infrared overexposure. A greenish hue of lichens blankets the exposed upper surfaces. The tags have been expired for two years. Disturbed ants crawl along the inner fender seam, originating from a bra that covers the front of the vehicle. There are no leaves or maple seeds in the cowl vents, so I assume it might have been residing in an apartment complex (covered parking) or perhaps a subdivision.

No doubt it has exceeded the given time to be tagged or removed by the local zoning board. A few parts lie strewn in various places on the floor. They are old parts but they have been put back in their replacement boxes, which usually indicates their “known-good” status, since they didn’t fix the car. A “Haynes” manual garnishes the passenger seat. I reach inside and pull the hood lever. As I reach under the front to find the safety release, I feel something brush the top of my hand. “Maybe a mouse,” I think to myself, but then I see it’s a wasp – and he has friends. I decide to return later armed with a can of carb cleaner. With the hood finally opened, I begin the “decritterization” process. Surprisingly, there were neither mouse nests nor the familiar accompanying aroma.

Once the vehicle had been made safe to lean on, I began basic testing and came to the quick conclusion – with the help of my “wasp/ant remover spray” – that there was no spark from the coil. I was not at all familiar with this fuel-injection system, so I headed inside to do some research. When consulting the data resource we use at our shop – under the heading of “Description of on-board diagnostics” – there reads the following: “The digital motor electronics (DME) system used on this vehicle does not produce or store diagnostic trouble codes (DTCs). Therefore there is no procedure to access them.”

This statement reminds me of an earlier time in my diagnostic career. The time when computer diagnosis consisted of narrowing the problem down to a “fuel or fire” condition, then “substitute with a known-good part” was the common phrase used by the diagnostic trouble-tree chart. There were no diagnostic scan tools or onboard diagnostic computers to consult for codes. That pretty much meant that if you were not working as a dealer with an inventory of “known-good parts,” you had to either chance some hefty-priced guesses or do enough diagnostic work to be sure you had the right bad part nailed down.

This could be a rather difficult task when the biggest gun in the available diagnostic arsenal was an analog volt/ohmmeter. It was due to these difficulties in overcoming diagnostic hurdles that some of the more-imaginative testing devices were born. This was also a time when there was somewhat more cooperation among competing flat-rate technicians in solving drivability issues. I recall working in the dealership in times of “lean pickin’s” when work was slow and a computer-related drivability issue would come in on the hook. There were a dozen hungry flat-raters drinking coffee in the break room, waiting for a job to do. The main garage door in front would open and a wrecker would drag in the shop’s first opportunity. “Got a no-start up here if anybody is interested.” Pregnant pause – “It’s fuel infected.”

“Let Mikey have it; he’ll eat anything,” came a reply from one of the wise guys.

“Guess my coffee break is over,” I said as I got up to meet the car being towed into my bay.

Back to the car. Armed with a wiring diagram that was actually a three-part image, a lab scope, a current probe, a couple of my favorite “poke-a-holers,” headlight, glasses and knee pad, I settled in next to the passenger side of the car and peeled back the damp carpet to expose and access the electronic control unit (ECU). The first signals I went for (Figure 1) proved wrong my hunch that the crank sensor was bad.

I centered the reference signal, hoping to see whether there might be a sync signal with which it needed to align for the ECU to trigger the coil primary circuit. The result is shown in Figure 2.

The absence of the appearance of anything notable became instantly obvious. With the sync issue no longer in question, I focused on the coil primary control circuit. The ECU’s control circuit for the coil ground is shown during cranking in Figure 3.

Seeing both the crankshaft-position (CKP) reference and engine-speed signals present and no primary switching going on had me now suspicious of the ECU. Next, I needed to verify that it had the necessary power and grounds. The diagram I had to work with made this task more difficult than it should have been. There were a few mislabeled connectors and a misdrawn relay diagram.

Believe it or not, the best circuit diagram I could find came from the Haynes manual. I tested the pertinent ECU circuits and determined that there were power supplies absent from the ECU stemming from the main relay, also known as the DME relay. This relay is actually a dual relay with one of the contact sets controlling fuel-pump current when energized by the ECU and the other feeding power to several circuits of the ECU itself when the coil is energized by “M39.”

This all-important coordinate had no corresponding connection to anything that either myself or the information source at the library could find in the wiring diagrams. I did find a reference in the Haynes manual alluding to a circuit on the theft module that read “to DME relay.” The elusiveness of this circuit makes some sense in the context that this car was made before the design of pass-key systems or radio-frequency chips or multiplexed digital security modules. It relied on simple inputs from the door, hood, hatch and top switches to be satisfied before allowing ignition feed to the DME relay. Testing further, I verified that the alarm input switches were all functioning properly and concluded that the module was defective. I pulled the cover off and revealed the problem shown in Figure 4.

Moisture had apparently invaded the passenger compartment where the module rested and had been allowed to sit long enough to oxidize the discrete components soldered to the board. At the owner’s request, we were able to bypass the alarm module that powered the DME circuit. There’s a particularly satisfying feeling when that initial “sputtering into life again” occurs amidst the smell of stale fuel and a cloud of dust and debris from cobwebs, dislodged mud-dauber nests and pulley surface rust. A smiling customer now has a running car again.

Jeff Bach is the owner of CRT Auto Electronics, an ASA-member shop in Batavia, Ohio. For more information on this topic, contact Bach at (515) 732-3965. His e-mail address is [email protected]