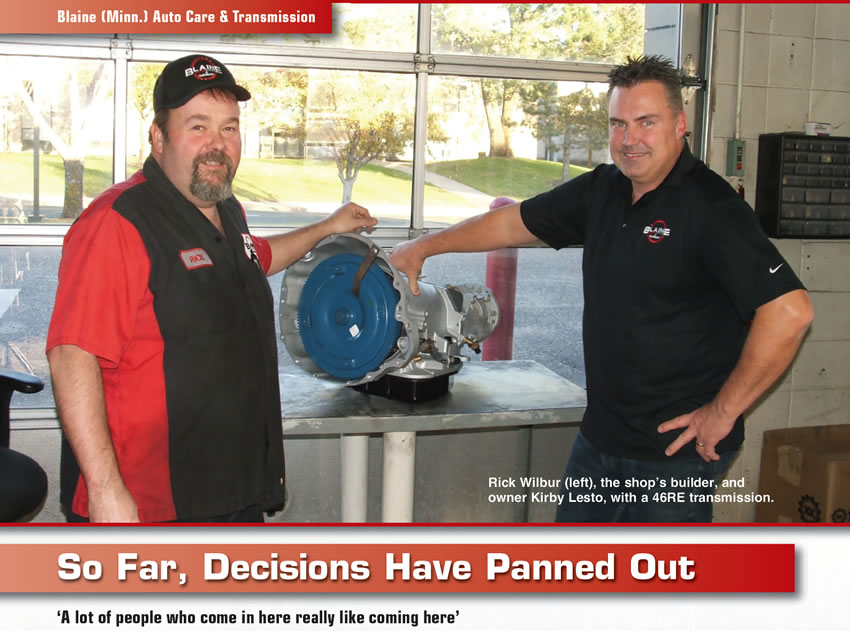 Kirby Lesto is describing the issue of not enough techs for numerous vehicles waiting to be repaired. He is speaking in an easygoing manner, sizing up the issue: It’s not a crisis; it’s a decision to be made.

So far, Decisions Have Panned Out

Kirby Lesto is describing the issue of not enough techs for numerous vehicles waiting to be repaired. He is speaking in an easygoing manner, sizing up the issue: It’s not a crisis; it’s a decision to be made.

“Customers are comfortable because we don’t force a lot of stuff on them,” he says. As an example, “We tell them, you can drive on that for six months before you need to address.”

In another simple way, he makes sure his employees have time with their families: no work on weekends. For customers with vehicles in the shop, they’ll get a free service loaner, a useful convenience, especially over a weekend. This amenity is rare among local shops, Kirby says.

Decisions – “This just in”

Four techs and a rebuilder have been working with a mounting workload. Kirby counted about 20 vehicles that need to be repaired. “We set up appointments, customers come in and you have to get the waiting appointments, obviously. And the other work isn’t getting done fast enough,” he said.

“Once the work overloads the current staff you have, and you’ve motivated everybody as much as you possibly can, and it’s still sitting there out in the lot, you pretty much have to hire somebody.”

During an interview in late October, Kirby said he hired a tech scheduled to start in early November. With the new tech, the shop has a staff of nine (In 2012, it had four total).

The staff includes Amber Reiners, a seasoned professional in the areas of automotive service writing and managing; and Kirby’s wife Jodi who works in the office part-time.

Kirby started at the shop in 2002 under different ownership and with another shop name. He purchased the shop in 2012 and entered into an arrangement to use the existing name and accounting services for 2.5% of sales. It seemed like a good idea at the time.

“We could not make any group decisions unless all store owners agreed. I oftentimes disagreed with the consultants’ ideas and philosophies. Another concern I had was building a business name I didn’t not own. When I sell my business or retire, potential buyers would have to negotiate a new consulting fee to use the name.

“That’s why I had to break away.” Kirby and Jodi made the decision. “And so far it’s been the right one.” The change took place on Jan. 1, 2018, and through the first year of independence, sales have been substantially higher, he said.

It wasn’t easy: “There were a lot of things that had to be changed along with the business name. Now that I’ve done it once, I could offer some advice to any other business owners in this situation. Don’t wait – get out from under anybody sucking away your profits with user fees that are not making you money.”

A few years back, Kirby faced another decision involving expansion of the business. He had an opportunity to buy a second shop at a good price and with everything in good order. There was only one problem: Kirby could not be in two places at one time. The Lestos decided that it just wouldn’t work for them.

“A lot of people who come in here really like coming here,” Kirby said. “We have a lot of repeat customers. You know them by their first name. And now we’re starting to see their kids as they get older and have cars. I don’t know what we do differently from other shops, but our lot’s always plum full.

Kirby recently acquired a new Hunter alignment rack. He mentioned that many transmission projects include an alignment. “When you drop the sub-frame out, you have to do an alignment when you’re done. You need to give the vehicle to the customer with a nice straight steering wheel.”

Within the transmission segment, 75% of the work is R&R and rebuilding; 25% is carry-out units.

Facing the Minnesota climate, the shop has transmissions ready to go, mainly to cater to plow-truck drivers and for fleets.

“This is kind of special with us. A customer might call with a plow truck and bring it down here in the morning, he can be back on the road that night. We can do a 4L60, 4L80. A typical Chevy Silverado-type truck, we can get them back on the road in one day,” he said. “We’ll have one of the guys take it out, we’ll take one of the shelf units, throw it in, fill it with fluid, get it done, get them back plowing.”

In addition, the shop can work on vintage vehicles and imports such as Volkswagens. Recently a Lexus with a U151 transmission came in.
“It’s whatever the customer brings in.”

The rough winters take their toll on daily drivers and they often bring repair work to the shop during snowstorms.

“The more snow we get, and the more people get stuck, typically the more transmission work we see – because people are lazy. They won’t get out with a shovel and clear the way, most of them. So they do the old reverse-to-drive, reverse-to-drive. They’re not getting out of the car when it’s 10 below and the wind is howling. Oh, no!”