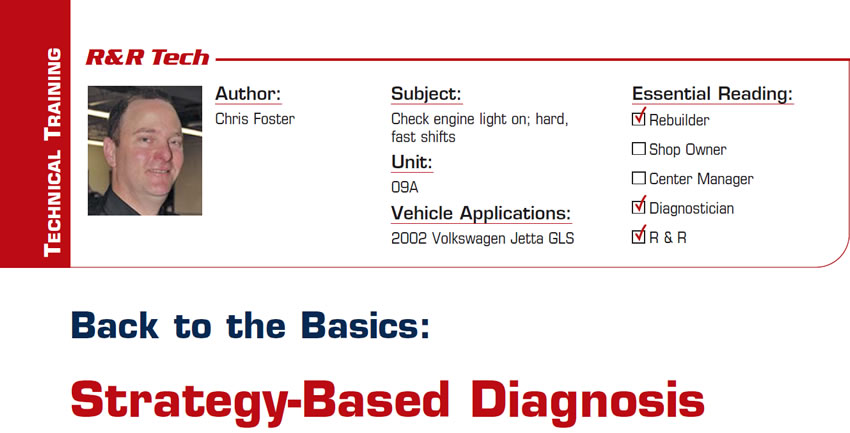 Later that day they showed up to drop off the car, a 2002 Volkswagen Jetta GLS with 72,000 miles (Figure 1). The owner of the car started to explain the concern he was having: “Everything was working great, then one day the check engine light came on and it started to shift real hard and fast. I took it to (shop A) and they said it was either the transmission control module or the transmission. If it was the module, it was going to be $2,000; if it was the transmission, $5,000 plus reprogramming and any wire repairs; or it could need both. I paid them $145 for looking at it, but I wanted to get a little more specific about what it was going to cost, so I took it to (shop B); they had it for a week and said they thought it needed a control module but were not real sure and asked me to take it somewhere else, so here I am.”

A friend of mine called me and asked me to look at a vehicle owned by one of his employees. He explained to me that two other shops in the area had looked at it and had identified the issue as transmission related, and if he was going to have to spend any money to repair it he would feel better having me work on the vehicle.

Later that day they showed up to drop off the car, a 2002 Volkswagen Jetta GLS with 72,000 miles (Figure 1). The owner of the car started to explain the concern he was having: “Everything was working great, then one day the check engine light came on and it started to shift real hard and fast. I took it to (shop A) and they said it was either the transmission control module or the transmission. If it was the module, it was going to be $2,000; if it was the transmission, $5,000 plus reprogramming and any wire repairs; or it could need both. I paid them $145 for looking at it, but I wanted to get a little more specific about what it was going to cost, so I took it to (shop B); they had it for a week and said they thought it needed a control module but were not real sure and asked me to take it somewhere else, so here I am.”

Eager to accept the challenge and willing to work on any type of transmission, I told him that I would be able to find out what exactly was going on with it and would give him a call in a day or so with an estimate for the repair.

I went to road-test the vehicle and get some preliminary information. In a short while I was able to verify the customer’s concern. The check engine light was on, and the vehicle shifted abruptly, with a shock at each shift point. I brought the car into the shop and checked for anything obvious. I raised it to see whether there were any signs of broken wires or leaks; it all looked good. I hooked up my scan tool and found DTC P0715, Input/Turbine Speed Sensor “A” Circuit.

“Well, this ought to be easy enough,” I said to myself. This was followed by a comedy of errors that I am embarrassed to talk about, but c’mon, we have all been there at one point or another.

Realizing that it was a newer transmission and that probably not a lot of technicians had worked on the VW 09A before, I figured it was going to be difficult to find an accurate diagnostic procedure. To make matters worse, there are early and late designs of this transmission model. However, I was amazed at the amount of information one can find on the Internet and through the various subscription services, and we have a very reputable VW dealership in our town, so I thought, “What could go wrong?”

I printed off the wire diagram from our subscription Web site to get an idea of what I was in for. To be honest, it seemed pretty cut and dried. Pins 9 and 10 were the signal wires coming from the transmission going to pins 09 and 36 at the TCM, which is under the plenum that covers the wiper motor (Figure 2). That seemed to me like a good spot for water intrusion. The wires were good and the TCM appeared to be dry, so after about two hours of chasing wires and taking stuff apart I was to the point of the vehicle either needing a module or having to have the transmission removed.

Knowing that I could not call the customer and tell him the same thing the other shop had just told him, we decided to take the diagnostics to the next level. I simply raised the car a bit, put it in Drive to let the wheels start spinning and back-probed the wires going to the TCM. There was no signal coming from the transmission, so I turned off the engine, unplugged the transmission and probed the wires going to the ISS9 (figures 3 and 4).

Needless to say the sensor was way out of range and needed to be replaced. I called around to see whether the part was available from any source other than the dealer, and it was not.

While on the phone with the VW parts department, I asked about the history of the part (in an effort to ensure that I was on the right track).

“We have never sold one here, most likely because it is an internal part and we would simply replace the transmission rather than try and repair it,” the parts person replied. “The part is $148 and the transmission is $4,815; I can have either one for you in two days.”

Not quite the “Oh, yeah, sell tons of them; in fact, we have four in stock” that I was hoping for. However, I confidently ordered the part and asked them to fax a picture of the sensor.

Figure 244 of Mitchell OnDemand was the picture on the fax machine; #2 is ISS and #1 is OSS.

Now that I had a picture of where the part was and the part was on the way, I called the customer and told him what I had found and provided him an estimate for the repair. It was unfortunate that replacing the part required 11.5 hours of labor, but we were a long way from $5,000 for replacing the transmission. The part was a few days away, and our shop started to get busy so I told him it would be late the next week before I could work on it again. With the repairs authorized and the part on the way, I moved on to the other cars in the shop.

The part arrived Thursday morning. With the mental picture burned into my memory from the fax received a few days before, I knew I had to remove the transmission, separate the case and replace the speed sensor just under the pump assembly, bolt the case halves back together and reinstall the transmission. The shop was very busy, so it was clear that I would not be able to get on it until late Friday or first thing Monday. My plan was to bring the car in on Friday afternoon and get it ready for repairs on Monday. I took the tires off and drained the fluids; didn’t look too bad.

Monday, I got the transmission out OK and slid it onto the bench. It looked as if the cases were sealed with sealant, so there should be no other parts needed; I separated the cases and there it was, just like the picture I studied. The shop was still very busy, so I decided to replace the sensor and bolt the cases back together, and I would reinstall it after we slowed up a bit; I had told him late next week, after all. I opened the new speed sensor, and it matched up perfectly with the one I was replacing, so no other checks were needed. Two bolts and one plug in and I’d be done. I bolted the cases together with assembly adhesive, flipped it over and went on to the next job.

We managed to get back to the installation late Wednesday. I got it all wrapped up with $85 worth of fluid pumped into it around closing time, ran it on the rack, checked the fluid, shut the hood and would do the final road test the next morning. I did so, only to reveal the same concern we started with: The check engine light came on, and it shifted quick and hard by the time I got out of the parking lot. I ran it back into the shop, and the scan tool showed DTC P0715 Input/Turbine Speed Sensor “A” Circuit. “Where did I go wrong here?” I asked myself.

Trying to regain confidence in my diagnosis, I came to the conclusion: “Of course! The dealer is the only one that can clear this code; I don’t have a VAG! The code must still be stored in the TCM and I can’t clear it.” I jumped into the car and drove it to the local dealer, where luckily the technician was available for a quick check of the car. We hooked it up to the VAG and it displayed code 17099 Input/Turbine Speed Sensor “A” Circuit (things are looking up now!). We ran through the same tests I had performed a week earlier and came up with the same results, an open ISS.

“Must have got a bad one,” he replied (just what I was thinking).

We then discussed the reason the dealership usually replaced the transmission as soon as it was determined to have an internal problem. I agreed, but unfortunately this was not an option for the owner of this car; back to the shop I went.

Reluctantly I pulled the transmission from the car again, slid it onto the bench, separated the cases and placed the faxed picture alongside the sensors to make sure I had changed the correct speed sensor. Sure enough, it should have worked, but it didn’t. After conferring with our resident electrical expert/service adviser, Jerry Temmen, we determined there was either a bad speed sensor or a bad wire going to the speed sensor – or an incorrect picture of the speed sensors in the transmission.

Where I went wrong was stopping the diagnosis on the basis of pictures and visually identifying the parts, assuming the concern was isolated. If I had spent five minutes checking the continuity between terminals 9 and 10 to (what I thought was) the input-speed sensor, it would have read OL. That would have led me to check the rest of the wires and eventually finding the correct speed sensor to replace. In other words, I would have gained the ability to verify the correction before reinstalling the transmission and would have saved a lot more time than by trying to shortcut the procedure so I could continue working on other cars in the shop.

Chris Foster is a diagnostician and the manager of Certified Transmission’s new location in Topeka, Kan.

Back to the Basics: Strategy-Based Diagnosis 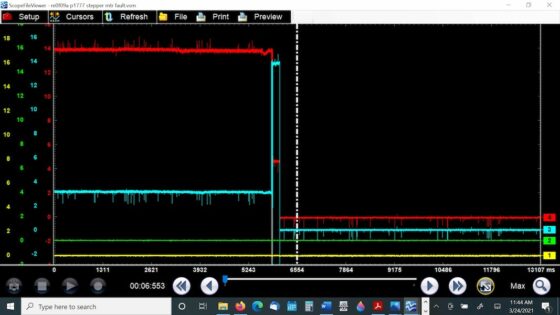