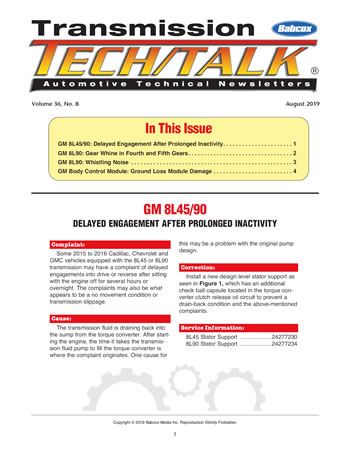 Some 2015 to 2016 Cadillac, Chevrolet and GMC vehicles equipped with the 8L45 or 8L90 transmission may have a complaint of delayed engagements into drive or reverse after sitting with the engine off for several hours or overnight. The complaints may also be what appears to be a no movement condition or transmission slippage.

Install a new design level stator support as seen in Figure 1, which has an additional check ball capsule located in the torque con-verter clutch release oil circuit to prevent a drain-back condition and the above-mentioned complaints.

Full size trucks and sport utility vehicles may have a complaint of a whining noise in fourth and fifth gears.

The reaction carrier (Figure 2), was machined incorrectly. The pinion gear pins were placed slightly off center. This causes a mating problem with the reaction internal gear (Figure 2). If this condition is allowed to exist, eventual failure of the carrier pinion gear bearings will occur.

Some 8L90 transmissions may have a complaint of a whistling noise whenever the vehicle is running.

The 50t orifice in the spacer plate, which is an exhaust for the converter feed limit oil circuit, is too small.

Some GM vehicles can sustain body control module (BCM) internal damage if the module ground path is removed while the module is still supplied with power (see Figure 4 for BCM view). In addition, other sys-tems controlled by the BCM will also be affected such as inoperative or intermittent in one or more of the fol-lowing systems:

When attempting to diagnose an electrical circuit problem with the ignition on, should the BCM ground circuit become disconnected from it’s ground point while it is powered up (Figure 5), will cause internal damage to the module.

Some vehicles have the BCM ground circuit wired through another component, this would also result in internal BCM damage. Examples of such vehicles are as follows:

Be sure to check appropriate wiring diagrams in order to see how the BCM ground path is wired to avoid having an open ground path during electrical diagnostics (see figures 6 through 9). At all other times disconnect the negative battery terminal to avoid the possibility of damage to the BCM.

Some of the above vehicles may have a redundant BCM ground circuit, check the appropriate wiring dia-gram for the vehicle being repaired to be sure before diagnostic work proceeds.