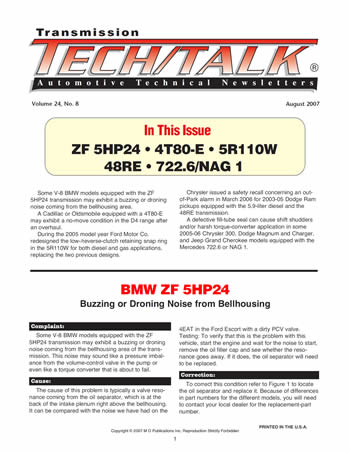 Some V-8 BMW models equipped with the ZF 5HP24 transmission may exhibit a buzzing or droning noise coming from the bellhousing area.

A Cadillac or Oldsmobile equipped with a 4T80-E may exhibit a no-move condition in the D4 range after an overhaul.

During the 2005 model year Ford Motor Co. redesigned the low-/reverse-clutch retaining snap ring in the 5R110W for both diesel and gas applications, replacing the two previous designs.

Chrysler issued a safety recall concerning an out-of-Park alarm in March 2006 for 2003-05 Dodge Ram pickups equipped with the 5.9-liter diesel and the 48RE transmission.

A defective fill-tube seal can cause shift shudders and/or harsh torque-converter application in some 2005-06 Chrysler 300, Dodge Magnum and Charger, and Jeep Grand Cherokee models equipped with the Mercedes 722.6 or NAG 1.

Some V-8 BMW models equipped with the ZF 5HP24 transmission may exhibit a buzzing or droning noise coming from the bellhousing area of the transmission. This noise may sound like a pressure imbalance from the volume-control valve in the pump or even like a torque converter that is about to fail.

The cause of this problem is typically a valve resonance coming from the oil separator, which is at the back of the intake plenum right above the bellhousing. It can be compared with the noise we have had on the 4EAT in the Ford Escort with a dirty PCV valve.

Testing: To verify that this is the problem with this vehicle, start the engine and wait for the noise to start, remove the oil filler cap and see whether the resonance goes away. If it does, the oil separator will need to be replaced.

To correct this condition refer to Figure 1 to locate the oil separator and replace it. Because of differences in part numbers for the different models, you will need to contact your local dealer for the replacement-part number.

After an overhaul, a Cadillac or Oldsmobile equipped with a 4T80-E may exhibit a no-move condition in the D4 range.

Note: With the lever in the wrong position, Park will be a little difficult to select but it will go.

Make certain the manual-link and clip assembly is inserted correctly into the detent lever or rooster comb. The drawings in figures 2 and 3 show incorrect installation.

Figures 4 and 5 show the correct installation.

During the 2005 model year Ford Motor Co. redesigned the low-/reverse-clutch retaining snap ring for both diesel and gas applications, replacing the two previous designs. A Ford Customer Satisfaction program, 05B27 Supplement #1, that ended in September 2006 would cover the replacement of this snap ring and/or transmission case under warranty, regardless of miles, on certain 2005 models. This new snap ring is a mandatory replacement and will back-service all models.

The reason for this replacement was, according to Ford: “When the affected vehicles are used for snow plowing, it is common to shift between forward and reverse repeatedly, and at times rapidly. Under this condition, the snap ring that retains the low/reverse clutch in the 5R110 TorqShift transmission may rotate out of position and become partially unseated from the transmission case splines, leading to either partial or complete loss of transmission reverse gear function. This program is being conducted to change the snap ring to a revised design to avoid this concern.”

Low/reverse snap ring and its assembly into the case. The new snap ring (see Figure 6) has tabs that are to be located at the 12 and 1 o’clock positions in the case, as shown in Figure 7.

Refer to Figure 8 for a breakdown of the low- /reverse-clutch assembly.

Note: A service pack available from Ford Motor Co. that was one of the service options under the Customer Satisfaction Program mentioned previously includes the new snap ring, pump-to-case gasket, solenoid-body-to-case gasket, pump seal, sump filter and front-pump bolts. At this time the kit is less expensive than the snap ring alone. The part numbers for these kits are:

In March 2006 Chrysler issued safety recall E17 for 2003-05 Dodge Ram pickups equipped with the 5.9-liter diesel and the 48RE transmission. The purpose of the recall was to install an out-of-Park alarm system. The procedure consists of a reflash that when initiated will cause the horn to go off, the headlights to flash and the PRNDL display to flash if the door is opened and the driver tries to exit a running vehicle without placing the selector fully in Park. This reflash can be performed only with the DRB-lll and dealer software.

Note: If a vehicle that falls under this recall is taken to the dealer for any service, it will automatically receive this reflash, with or without customer approval or notification. If the driver of this vehicle likes to open his door to see better while backing up, the out-of-Park alarm system will be initiated. Door switches that are dirty or sticking also can initiate the alarm system. Do not attempt to change the range sensor! This is now normal operation.

Some 2005-06 Chrysler 300, Dodge Magnum and Charger, and Jeep Grand Cherokee models equipped with the Mercedes 722.6 or NAG 1 may exhibit shift shudders and/or a complaint of harsh torque-converter application.

The cause may be a defective fill-tube seal allowing water intrusion, resulting in contamination of the transmission fluid and creating shuddering shifts, harsh torque-converter application and premature transmission failure.

To correct this condition, repair internal components, as water intrusion will destroy rubber seals and create friction disintegration, not only inside the transmission but also in the torque converter. Ensure that any vehicle listed here has the water shield in place. The kit consists of a new fill-tube seal, longer bolt and a water shield, as shown in Figure 9.

If this repair is being attempted in the vehicle as per TSB number 21-011-05 Revision A, use a C-clamp to install the fill-tube seal after applying a small amount of silicone sealant to its sealing surfaces inside and out, as shown in Figure 10. Caution: It is going to be very difficult to flush out all the water in this transmission.

Refer to Figure 11 for the installation of the water shield on the transmission.