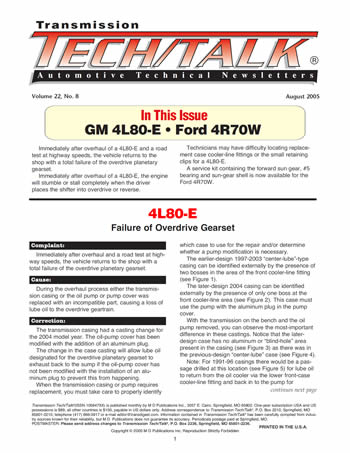 Immediately after overhaul and a road test at highway speeds, the vehicle returns to the shop with a total failure of the overdrive planetary gearset.

During the overhaul process either the transmission casing or the oil pump or pump cover was replaced with an incompatible part, causing a loss of lube oil to the overdrive geartrain.

The transmission casing had a casting change for the 2004 model year. The oil-pump cover has been modified with the addition of an aluminum plug.

The change in the case casting will allow lube oil designated for the overdrive planetary gearset to exhaust back to the sump if the oil-pump cover has not been modified with the installation of an aluminum plug to prevent this from happening.

When the transmission casing or pump requires replacement, you must take care to properly identify which case to use for the repair and/or determine whether a pump modification is necessary.

The earlier-design 1997-2003 “center-lube”-type casing can be identified externally by the presence of two bosses in the area of the front cooler-line fitting (see Figure 1).

The later-design 2004 casing can be identified externally by the presence of only one boss at the front cooler-line area (see Figure 2). This case must use the pump with the aluminum plug in the pump cover.

With the transmission on the bench and the oil pump removed, you can observe the most-important difference in these castings. Notice that the later-design case has no aluminum or “blind-hole” area present in the casing (see Figure 3) as there was in the previous-design “center-lube” case (see Figure 4).

Note: For 1991-96 casings there would be a passage drilled at this location (see Figure 5) for lube oil to return from the oil cooler via the lower front-case cooler-line fitting and back in to the pump for distribution to the internal lubrication circuits. With 1997-2003 cases, this passage was not drilled, and this would prevent lube oil for the overdrive section from exhausting back to the sump even though the corresponding front lube passage in the redesigned oil pump remained open.

To modify the oil pump for use with the 2004 casing, you first must acquire part # 24232339 from your local GM dealer. This service package will include an aluminum plug, pump gasket and O-ring, and a turbine-shaft O-ring as a kit.

Using Figure 6 as a guide, remove the existing cup plug in the oil-pump-cover front lube passage by driving it out with a hammer and a punch, taking care not to damage the pump cover.

Insert the aluminum plug into the front lube hole. Seat the plug flush or no more than 1/16 inch below the pump-cover outer diameter.

With a small chisel-point tool, stake the plug in a cross pattern using Figure 7 as a guide.

Make sure that the plug does not protrude outside the pump cover or move under light pressure.

Immediately after transmission overhaul, the engine will stumble or stall completely when the driver places the shifter into overdrive or reverse.

During the overhaul process the original sun-gear shaft of 1997 or later design was replaced with a 1996 or earlier sun-gear shaft. This was the only piece replaced in the main planetary geartrain. All other related geartrain parts remain original.

The sun-gear shafts used in 1997 and later center-lube transmissions have a shortened bushing journal in comparison with the earlier design. Using the earlier-design shaft with the longer bushing journal will create a restriction in the oil-cooler/lube circuit and cause the converter clutch to drag.

Disconnect the rear cooler line from the case fitting. Place a suitable piece of hose onto the end of the cooler line so as not to bend or kink the line, and then direct the open end of the hose into a clean bucket or suitable container.

Start the engine and, with the brakes applied, shift the transmission into gear. If this eliminates the condition, the restriction is inside the transmission. Replace the sun-gear shaft with the proper part for your application (see Figure 8).

Note: If you are able to keep the engine from stalling completely and try to take the vehicle for a road test, severe damage to the main planetary geartrain will occur.

When the transmission was being removed, installed or overhauled, the technician noticed that the original case cooler-line fittings or retaining clips were damaged or missing.

On 1997 and later center-lube transmissions, the oil-cooler return line was relocated so that oil returning to the transmission from the cooler was directed into the center support at the middle area of the case instead of returning to the pump as in the 1996 and earlier units. This change also made a redesign of the case fittings necessary. The profile of the rear fitting was lengthened so that the inner end will fit into a seal in the center support. At the same time, both the front and rear fittings were modified for quick connect/disconnect in place of the earlier flared line/threaded type (see Figure 9).

Parts personnel may tell you over the phone that the item is not available or that they cannot provide the correct piece unless you visit the dealer personally and point to the item in an exploded view. Use the part numbers listed under Service Information.

The OEM part numbers at the time of this printing follow:

A service kit containing the forward sun gear, #5 bearing and sun-gear shell, as illustrated in Figure 10, is now available.

To eliminate the mismatch of these parts, which would result in gear noise and damage to these and other internal transmission components because of dimensional differences.

The new forward sun gear has an identification groove and blue dye stripe below the splined area and is 4.0 inches (101.6 millimeters) long.

The previous forward sun gear does not have an ID groove or a blue dye stripe but is the same length. The new #5 bearing is a two-piece design and is 0.205 inch (5.24 millimeters) thick.

The new sun-gear shell has an ID groove at the base of the bowl and has an overall height of 4.02 inches (102.11 millimeters).

The previous sun-gear shell does not have an ID groove and has an overall height of 4.13 inches (104.90 millimeters).

Figure 11 shows all these measurements.

This service kit will back-service all 4R70W transmissions from 1994 to 2003. It cannot be used in 2004 models because of the addition of a turbine-speed sensor, which resulted in a different sun-gear shell.