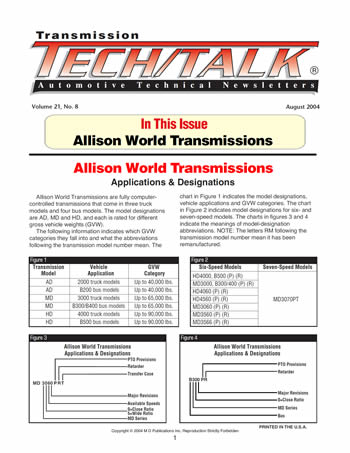 Allison World Transmissions are fully computer-controlled transmissions that come in three truck models and four bus models. The model designations are AD, MD and HD, and each is rated for different gross vehicle weights (GVW).

Allison World Transmissions are fully computer-controlled transmissions that come in three truck models and four bus models. The model designations are AD, MD and HD, and each is rated for different gross vehicle weights (GVW).

The following information indicates which GVW categories they fall into and what the abbreviations following the transmission model number mean. The chart in Figure 1 indicates the model designations, vehicle applications and GVW categories.

The chart in Figure 2 indicates model designations for six- and seven-speed models.

The charts in figures 3 and 4 indicate the meanings of model-designation abbreviations.

NOTE: The letters RM following the transmission model number mean it has been remanufactured.

The technician is unable to retrieve codes on vehicles equipped with computer-controlled Allison World Transmissions such as 3000, B300/B400 Series, and 4000 and B500 Series transmissions etc.

A lack of diagnostic equipment available to the aftermarket to successfully communicate with the computer control systems in the various vehicles that are equipped with the Allison World transmissions.

There is a manual procedure for retrieving codes on vehicles equipped with these transmissions. The meaning of the display once you have initiated the code-retrieval sequence can be somewhat confusing without clarification.

When an active diagnostic code is stored, the LED indicator next to the mode button will be illuminated on vehicles with a shifter that has a single-digit display.

On vehicles having a shifter with a double-digit display, the “Mode On” light will illuminate. At this time the transmission may be in limp mode.

If the transmission is equipped with an oil-level sensor and you perform the preceding procedure, you will not be in the code-retrieval mode; you will be in the oil-level-information mode.

To skip the oil-level-information mode, press the up and down arrow buttons or the Display Mode button twice. You will now be in the diagnostic mode.

Once you activate this mode, a two-minute countdown begins if the following conditions exist:

Oil level will be displayed at the end of the two-minute countdown. During the countdown, the display will begin to flash the numbers 8, 7, 6, 5, 4, 3, 2, 1, with the numbers decreasing by one digit every 15 seconds.

The chart in Figure 7 shows oil-level codes. Once oil-level-information conditions are met, the shifter display window will display the oil-level information, as shown in Figure 8.

To exit the oil-level-information mode, on keypad shifters, either press the neutral button twice or simultaneously press the up and down arrow buttons twice.

On models with shift-lever selectors press the Display button twice, or momentarily move the shift selector to any range and then back to the neutral position.

To bypass the oil-level-information mode, on vehicles equipped with the keypad shifter, you must press the up and down arrow buttons simultaneously twice.

On models with shift-lever selectors, you must press the Display Mode button twice.

This means that in the D1 shift position, code 25 for an output-speed sensor was stored and sub-code 11 for zero mph in first gear was stored.

Each digit is displayed for about a second, and the cycle will repeat itself whenever the Mode button is pressed.

While in the diagnostic mode, push and hold the Mode button for about 10 seconds to clear all stored codes.

Shift-selector models with double-digit displays will sound a tone in eight seconds and another tone in about 10 seconds, indicating “All Clear.”

Shift-selector models with single-digit displays flash the LED indicator three times after about three seconds and three times again after about 10 seconds, indicating that all codes have been cleared.

On models with keypad shifters, press the Neutral button or simultaneously press the up and down arrow buttons once.

On models with shift-lever selectors, press the Display Mode button or move the shift lever to any range and then back to the neutral position.

The charts in figures 9a to 9f provide a list of main codes and sub-codes.

After overhaul the transmission binds up on the 1-2 shift; initial take-off in first and reverse have no complaints.

The first clutch has been assembled incorrectly and is causing these complaints. The order of the friction and steel plates in relation to the rear ring gear can be confusing even with a factory manual.

Without the correct clutch/steel arrangement, the first clutch is jammed on mechanically.

Place the rear ring gear on the workbench with the extended teeth down, as shown in Figure 10.

Load six steel plates and six friction plates onto the ring gear. Grasp the entire ring gear and clutch-pack assembly and turn it upside down so the extended teeth are at the top of the clutch pack, as shown in Figure 11.

Now, install the assembly into the case, using care to align the external tabs of the steel plates with the slots in the case. Then install the last steel plate and then the last friction plate, so that it is sitting on top of the extended teeth of the ring gear, followed by the pressure plate and snap ring. Refer to Figure 12 for the correct assembly of the first clutch and ring gear. Figure 13 shows incorrect assembly of the first-clutch pack and ring gear.

This procedure is necessary on 500-series transmissions after serial number 5071. Before 5071 units, the ring gear did not have extended teeth. 5071 is the last four digits of the serial number.