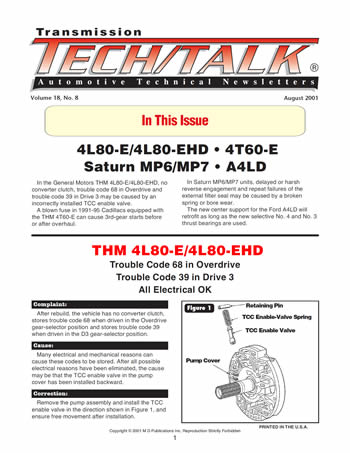 Many electrical and mechanical reasons can cause these codes to be stored. After all possible electrical reasons have been eliminated, the cause may be that the TCC enable valve in the pump cover has been installed backward.

Remove the pump assembly and install the TCC enable valve in the direction shown in Figure 1, and ensure free movement after installation.

Before or after overhaul, 1991-95 Cadillac Deville, Concours, Eldorado and Seville may exhibit a 3rd-gear start in the Drive position along with Diagnostic Trouble Code P040 (power-steering pressure-switch circuit open).

The cause may be a blown fuse in the circuit that supplies battery voltage to the solenoids in the transmission and the power-steering pressure switch.

In some model years the transmission solenoids, EGR solenoid, brake switch, canister-purge solenoid, power-steering pressure switch and air-conditioning relay are all on the same circuit. A short or wiring problem on any or all of them may cause the fuse to blow.

Locate terminal E on the harness connector, shown in Figure 2, and check for battery voltage with the ignition on.

If there is NO voltage at terminal E, see Figures 3 and 4 for fuse location and vehicle application, and replace the fuse.

The fuse in question is highlighted for identification purposes.

1993-up Saturns equipped with MP6 or MP7 automatic transaxles may exhibit delayed and/or harsh engagements into Reverse after the vehicle is at operating temperature. There also may be repeat failures of the external filter seal, which will cause fluid loss.

Warm vehicle to operating temperature. Remove temperature sensor and install a 0- to 300-psi pressure gauge, as shown in Figure 5.

Place selector in Reverse at idle and ensure that line pressure is not less than 175 psi. If the pressure gauge indicates low pressure, remove the valve body and disassemble the pressure-regulator-valve lineup (See Figure 7a).

Locate the cushion spring in the line-pressure regulator valve and inspect it for breakage. If the spring is not broken, re-install the pressure-regulator valve, place a flashlight over the valve body as shown in Figure 7b, and look for light between the valve and its bore.

If you see light or the cushion spring is broken, replace the upper valve body with Saturn upper-valve-body kit, part No. 21005813.

Creates a common part that will retrofit to 1985. Parts Affected:

The late-model snap-design center support will retrofit to early-design units as long as the new selective No. 4 and No. 3 thrust bearings are used (See Figures 8 and 9).

The No. 5 thrust bearing is not used on early non-snap-design models (See Figure 8).

If rear endplay is too tight with the thinnest of the four selective bearings, which is the F3TZ-7L326-A 0.110-in. thrust bearing, remove the No. 14 thrust washer, which is the steel shim on the rear of the sungear shell, and recheck the rear endplay. If end-play is now OK, leave out the No. 14 washer.