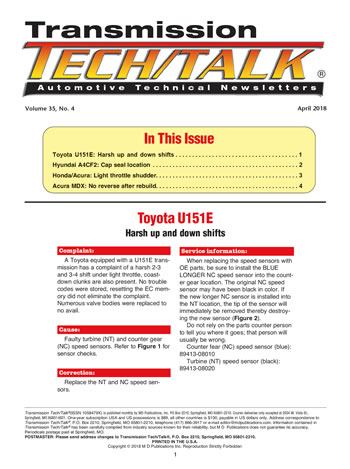 A Toyota equipped with a U151E transmission has a complaint of a harsh 2-3 and 3-4 shift under light throttle, coast-down clunks are also present. No trouble codes were stored, resetting the EC memory did not eliminate the complaint. Numerous valve bodies were replaced to no avail.

When replacing the speed sensors with OE parts, be sure to install the BLUE LONGER NC speed sensor into the counter gear location. The original NC speed sensor may have been black in color. If the new longer NC sensor is installed into the NT location, the tip of the sensor will immediately be removed thereby destroying the new sensor (Figure 2).

Do not rely on the parts counter person to tell you where it goes; that person will usually be wrong.

While disassembling an A4CF2 transmission, the technician hears something fall to the bench. When examining this part, the technician not only does not recognize this part but also has no idea where it belongs (Figure 3).

The cap seal may not be pressed into the transfer gear shaft causing it to fit loosely.

Install the cap seal like a bowl in the location shown in Figure 4.

Note: The TF80/81SC transmission has this cap seal located in the final drive section in the transfer gear shaft as well.

A Honda has a complaint of a shudder with light throttle at approximately 45-55 mph. The customer has informed the technician. The shudder seems to occur whenever the “ECO” lamp is on.

One cause may be a fault with the active control engine mount (ACM) system. These mounts are computer controlled (Figure 5), and this system has been known to malfunction. However, the mount itself could also be deteriorated. The ACM system is capable of storing electrically and mechanically generated trouble codes.

Caution: This shudder complaint can easily be mistaken for a converter clutch malfunction!

The “ECO” lamp operation is tied into the i-VTEC variable cylinder management (VCM) system (V-6 engines), which is how Honda disables cylinders (6 to 4 to 3). When cylinder cut takes place the “ECO” lamp illuminates to inform the driver that the vehicle is in a fuel saving driving mode.

Note: Honda states that a slight vibration in “ECO” mode is considered NORMAL and provides no way to disable system operation!

Vehicles with the i-VTEC systems are also equipped with an active noise cancellation (ANC) system. Along with a drive by wire system and the ANC system, the operation of the i-VTEC system operates fairly seamlessly, albeit the slight normal vibration.

The ANC system uses front and rear sound sensors mounted in the ceiling of the vehicle as well as a ANC control module under the dash. The ANC system utilizes the vehicles radio speakers to cancel out noise by using an opposite phase sound.

The following vehicle applications are equipped with the above mentioned systems:

After a rebuild or an exchanged valve body, an MDX vehicle may exhibit a no reverse condition.

There are a variety of different manual valves in both overall length and distances between valve lands. When the incorrect manual valve is used, reverse pressure is compromised.

Figure 6 and the information below provide known applications. R&D is incomplete on any model in the generation not mentioned due to a lack of core capability at this time; this would include the 06-08 3.5L RL and 07-08 3.5L TL.