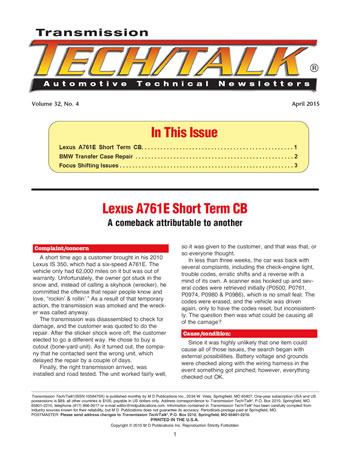 A short time ago a customer brought in his 2010 Lexus IS 350, which had a six-speed A761E. The vehicle only had 62,000 miles on it but was out of warranty. Unfortunately, the owner got stuck in the snow and, instead of calling a skyhook (wrecker), he committed the offense that repair people know and love, “rockin’ & rollin’.” As a result of that temporary action, the transmission was smoked and the wrecker was called anyway.

The transmission was disassembled to check for damage, and the customer was quoted to do the repair. After the sticker shock wore off, the customer elected to go a different way. He chose to buy a cutout (bone-yard unit). As it turned out, the company that he contacted sent the wrong unit, which delayed the repair by a couple of days.

Finally, the right transmission arrived, was installed and road tested. The unit worked fairly well, so it was given to the customer, and that was that, or so everyone thought.

In less than three weeks, the car was back with several complaints, including the check-engine light, trouble codes, erratic shifts and a reverse with a mind of its own. A scanner was hooked up and several codes were retrieved initially (P0500, P0761, P0974, P0980 & P0986), which is no small feat. The codes were erased, and the vehicle was driven again, only to have the codes reset, but inconsistently. The question then was what could be causing all of the carnage?

Since it was highly unlikely that one item could cause all of those issues, the search began with external possibilities. Battery voltage and grounds were checked along with the wiring harness in the event something got pinched; however, everything checked out OK.

The wiring harness was then disconnected from the transmission-case connector to look for fluid contamination or oxidation. The wiring-harness plug was dry and in fairly good shape, with one exception; a pin from the case connector was stuck in one hole.

Once it was out of the transmission, the connector pins were given a good once over, and to no surprise, this was causing all of the drivability issues. Not only was there a pin gone; the entire connector was a rust bucket (Figure 2).

Normally, when a shop gets a cutout from an auto wrecker, it’s gone over fairly well, and some shops will even change metal-clad seals, etc. just to avoid having to redo it later. Another routine practice that should always be done is to closely examine all electrical connector terminals for signs of rust, oxidation or bent/missing pins.

Obviously, this was not the case with the Lexus cutout – ball dropped! Although the transmission allegedly only had 50,000 miles on it with a fairly clean pan and fluid, the unit was certainly exposed to water, which caused the severe rusting. The kicker was how did it work for three weeks before going wacky?

The auto wrecker was contacted, which then gave authorization to replace the harness at their expense, but it was still a drill for the customer and shop. Today’s reality dictates accommodating different approaches to repairing a vehicle and pacifying a customer; however, there are no guarantees that someone else’s stuff is bulletproof. It just comes down to luck sometimes.

A customer that had a 2007 BMW X3 was having an erratic problem with the check-engine light coming on and the transfer case 4W operation. The AWD vehicle had a 3.0L engine and 6L45 transmission with 65,000 miles on it.

The Bimmer was driven with a scanner to see what was up. In addition to an inconsistent AWD, the check-engine light would reappear each time that it was cleared, indicating something more than just software. There were three different trouble codes that would set, which were manufacturer codes: 2A32, 2A37 & an eccentric 2A45.

The transfer case is a rather unique design in the way that it operates a clutch pack mechanically, not hydraulically, somewhat like a GM. It’s called an Active Torque Control transfer case, and there are several models based upon the vehicle. The E83 requires an ATC 400, E53 an ATC 500 and the E70 requires an ATC 700. The differences have to do with capacity and hook up, (Figure 3).

Although there were several different issues, the main item responsible for all of it was the actuator motor that is bolted to the side of the transfer case. Once the actuator motor was removed, the motor’s drive gear was found to be partially stripped. The worm gear that contacts the motor drive gear appeared to be in good shape. In addition, the electrical part of the motor including sensors, etc. seemed to function well.

The traditional way to effect repair would be to purchase a new gear; however, the gear is not available from BMW. Only the entire actuator motor assembly is available from BMW, and it’s not cheap (it’s almost a grand).

The upside is a new gear is available in the after-market from the company Odometer Gears (odometergears.com) and it’s less than $100. The gear fits 2004-2010 models, (Figure 5). Log on to the website to view a video concerning gear replacement. When servicing this transfer case, make sure to use the proper fluid TF0870 (part number 83 22 0397 244) to avoid apply issues.

Inexpensive fixes do exist, although few and far between.

When a customer brought in his 2010 Ford Focus, the symptoms seemed rather straightforward. There were codes and erratic shifts, fairly typical stuff, or so it appeared.

The vehicle had a 2.0L engine and a 4F27E four-speed transmission with 74,000 miles on it. A scanner was hooked up and the vehicle was driven after the DTC’s (diagnostic trouble codes) were erased. At first, the transmission went one, two, three but then things took a turn for the worse. Shifting became overly harsh until the unit regressed to 2nd gear starts only. In conjunction, two trouble codes were set, P0765 and P0768. Both codes refer to issues with the SSD shift solenoid circuit, which includes the solenoid, wiring harness, grounds and PCM, whether the MIL light is on or not.

Using a scanner, it appeared as though the proper signal was being sent to the transmission, so it was decided to look for internal transmission issues. The harness was checked for open or shorted connections, and the solenoid resistance was checked as well and appeared to be within spec. Since solenoids can fail mechanically as well as electrically, another SSD solenoid was installed and valves were checked, just as a precaution. The SSD is one of three PWM solenoids that are side by side, (Figure 6). Unfortunately, the replacement did not get the job done. Back to the drawing board.

Although the Ford Focus with a four-speed automatic is fairly basic, relatively speaking, it does have electrical stuff to contend with. There are vehicle switches and sensors in conjunction with the transmission components, all of which feed info to the PCM, (Figure 7). The question remained, which of the doodads was causing the shift and trouble-code problems? After testing out the remaining components, which checked OK, there was only one thing left to deal with, the computer.

The PCM on the Ford Focus, as with most PCM’s, is a dual purpose module. The “black box” not only contains the ECU (engine control unit) but also the TCU (transmission control unit) as well, (Figure 8). Internally, there are drivers that control the various aspects of the transmission and can fail like any other component. Normally, if a driver fails, the computer is done, but apparently that was not the case on the Focus since the problems were more erratic in nature.

The issue of what to do became next on the list, since a PCM is not an inexpensive item. Going to a dealer to purchase a new PCM can be a pricey gamble, so it was decided to go used.

Swapping out a used PCM/TCM is certainly vehicle dependent. Doing this procedure on one type of vehicle can result in a variety of issues, including an engine that won’t even start and a subsequent tow to the dealer to fix it. Fortunately, it is possible to swap out a used PCM on a Ford Focus, which is exactly what was done.

After the PCM was replaced, a reflash was performed to sync the ignition key. The vehicle was then driven, and it worked well to everyone’s enjoyment. The gamble worked.

When erratic conditions exist, trying the most common and basic approach is always preferable. However, at times, “thinking inside the box” is the key even though the price tag is more.