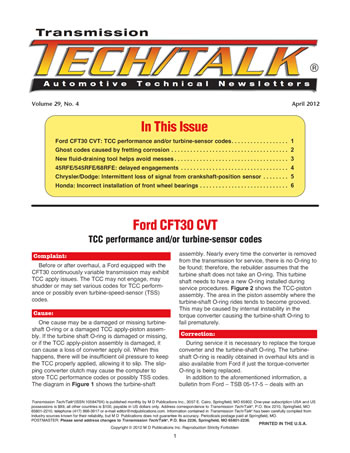 Before or after overhaul, a Ford equipped with the CFT30 continuously variable transmission may exhibit TCC apply issues. The TCC may not engage, may shudder or may set various codes for TCC performance or possibly even turbine-speed-sensor (TSS) codes.

One cause may be a damaged or missing turbine-shaft O-ring or a damaged TCC apply-piston assembly. If the turbine shaft O-ring is damaged or missing, or if the TCC apply-piston assembly is damaged, it can cause a loss of converter apply oil. When this happens, there will be insufficient oil pressure to keep the TCC properly applied, allowing it to slip. The slipping converter clutch may cause the computer to store TCC performance codes or possibly TSS codes. The diagram in Figure 1 shows the turbine-shaft assembly. Nearly every time the converter is removed from the transmission for service, there is no O-ring to be found; therefore, the rebuilder assumes that the turbine shaft does not take an O-ring. This turbine shaft needs to have a new O-ring installed during service procedures.

In addition to the aforementioned information, a bulletin from Ford – TSB 05-17-5 – deals with an engine-speed fluctuation at highway cruising speeds for vehicles built before 08-02-2005. The bulletin basically states that “some CVT vehicles may exhibit a 50-100 rpm fluctuation while at highway speeds with a constant throttle or slight tip-in to the throttle.” The bulletin further says “there will be no diagnostic trouble codes (DTCs)” associated with this problem and that the correction for this issue is to reprogram the powertrain control module (PCM) and the transmission control module (TCM) “to the latest calibration using WDS release B38.10 and higher or B39.1 and higher.” This reprogramming procedure may not have any effect on the speed-fluctuation issue, which is most likely due to the missing O-ring on the turbine shaft.

A vehicle comes into the shop storing one or more DTCs. The diagnostic procedure finds nothing definitive; however, the codes can be cleared at this time and the symptoms are not present. These codes will return intermittently with the same diagnostic results.

A bit of oxidation has developed at connector contact points because of “fretting corrosion,” which results from a small amount of motion between connector cavities and pins.

In some instances simply disconnecting and reconnecting a connector eliminates the codes and the symptoms that exist. You can identify fretting corrosion by examining connector-terminal ends for what looks like small black smudges (Figure 3); in some instances a magnifying glass may be necessary.

To repair and prevent fretting corrosion, disconnect the problem connector and apply a liberal amount of dielectric grease with a nylon brush. Make certain the connector seal is in good condition and secure wire harnesses to prevent unnecessary movement.

A good example of problems caused by fretting corrosion is in GM TSB 08-05-22-009C. You can search this bulletin by using a 2004-2008 Chevy Malibu as the problem vehicle.

Many times one of the technicians in the shop has to drain fluids, oils or coolant as well as filters that are in difficult locations. As the fluid drains it could spill over cross members, exhaust systems, hoses or many other items that could be in its path. In some instances all the oil cannot be cleaned up because it has gotten into channels, nooks and crannies. The oil continues to drip for some time. This could pose a problem for a freshly repaired or serviced vehicle because these residuals might be mistaken for a leak.

The Form-A-Funnel (Figure 4) can be shaped into many different forms so it can get to difficult drain locations (figures 5 and 6).

Warning: The inner core of Form-A-Funnel is lead. If the outer rubberized coating should become damaged, it would be wise to replace it and dispose of the damaged one properly; at the very least, wash your hands if you handle the core.

Form-A-Funnel is available from companies such as Transtar, NAPA and NewPig.com.

Shortly after a fluid and filter change, whether part of a service or overhaul, the transmission begins to exhibit delayed engagements, which can be longer after an extended off time.

A number of codes may be stored, including but not limited to:

A cooler filter that restricts flow may have been installed (Figure 7).

Make certain to install a quality cooler filter by checking to see that the intake holes in the top of the filter are not restricted (Figure 8).

Some cooler filters may come with a new adapter. Screw the non-threaded end into the filter (Figure 9) and tighten to 165 lb.-in. (18.6 Nm).

For 2010 and later RFE transmissions, the 4×4-style filter and pan will be used for all applications. Some RFE transmissions may have a new common oil pan that can be used with either filter. The spin-on cooler filter is the same for any style of pan.

A 2008 or 2009 Chrysler 300 Series or Dodge Charger with a 2.7- or 3.5-liter engine and either the 42RLE or NAG1 transmission may come in with a P0339 code for intermittent loss of signal from the crankshaft-position sensor (CKP). This may occur even after the transmission has been installed after completion of repairs.

An inconsistent air gap exists between the crank-shaft-position sensor and the flex plate because of flexing of the flex-plate exciter ring (Figure 13).

The first step in the repair of this condition is to install a shim 0.018 inch (0.46mm) thick between the transmission case and the bolt hole of the CKP sensor (figures 13 and 14) and tighten the CKP-sensor attachment bolt to 106 lb.-in. (12 Nm). Next, clear the code and drive the vehicle, performing four wide-open-throttle 1-2 shifts in the range of 5,800 rpm.

If this procedure fails to cure the complaint and code P0339 returns, then the flex plate will have to be replaced.

After replacement of front wheel bearings, the ABS warning lamp is illuminated. Code retrieval produces any of the following codes:

The wheel bearing has been pressed into the steering-knuckle hub backward.

One side of these Honda wheel bearings has what appears to be a brown dust shield (Figure 15). This is the wheel-speed-sensor encoder, because this dust shield has been impregnated with metallic particles.

Make certain the bearing is carefully installed with the brown side facing the inside of the knuckle, where an air gap of 0.020-0.050 inch (0.5-1.2mm) is maintained.

Note: This bulletin serves as an example, as it also applies to select Acura vehicles and those of other manufacturers.